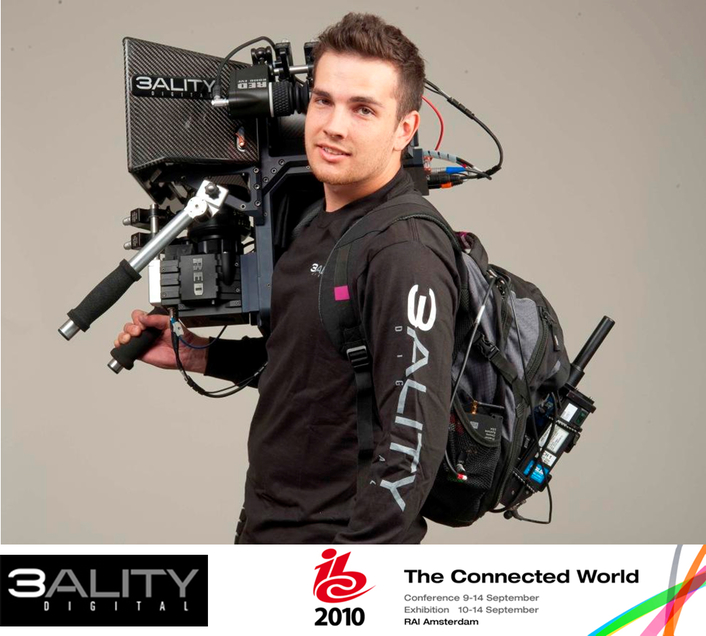 New lightweight TS-5 production rig heads full product range at IBC2010
3ality Digital, world leader in advanced technologies to empower creative digital stereoscopic 3D (S3D) acquisition, is adding to its range of beam-splitter mirror rigs with the launch of its TS-5 at IBC2010. This, the first fully-automated, remotely-aligned lightweight beam-splitter on the market, is aimed at lightweight and wireless camera operations and tight spaces, and can be mounted on a Steadicam for complete flexibility.

The TS-5 production rig weighs just 10kg, but features the same capabilities as 3ality Digital’s full-sized camera rigs, including precision motor-driven adjustment of inter-axial distance and convergence, under the control of unique software to guarantee fast and accurate set-ups, camera alignments that remain in precise alignment, and matched zooms.

Alongside the new TS-5, 3ality Digital will also highlight the established TS-2 beam-splitter production rig and TS-4 side-by-side rig. These are widely used by leading production companies across the movie and television world to deliver the maximum flexibility in S3D acquisition, when perfect precision in camera alignment is critical to achieve engaging and immersive content.

3ality Digital’s stereoscopic camera rigs are used in association with the company’s proprietary stereo image processors, and 3ality Digital offers two models to meet practical production requirements. The SIP-2100 controls a single camera, and the SIP-2900 can control up to eight cameras from the same base electronics.

Both models provide all the functionality required for excellent S3D acquisition, allowing the camera operator to align tracking and sync lenses, the stereographer to monitor and optimise the 3D experience, and the video engineer to match pairs of cameras for seamless colour tracking.

3ality Digital will also use IBC to highlight its training programme. 3D IQ aims to teach the fundamentals of S3D production, to spur the creation of a pool of talent familiar with both the principles and the practical aspects and to empower the economic and independent creation of excellent S3D entertainment.

“This is undoubtedly the year of stereoscopic 3D, and 3ality Digital is totally focussed on providing superb enabling technologies for it,” said Steve Schklair, CEO of 3ality Digital Systems, the technology and production arm of 3ality Digital, LLC. “Whether on set in a movie, giving a camera operator the freedom to go anywhere with wireless cameras, or embracing the viewer with 3D content, we are there, removing the mysteries of stereoscopic shooting and releasing creativity.”

Schklair is giving a “3D Day” keynote session in the IBC conference on Monday morning, in which he will demonstrate shooting techniques using 3ality Digital’s rigs and SIPs, including two wireless cameras mounted on a TS-5.

3ality Digital products can also be seen on the IBC stands of its strategic partners, Grass Valley and Ikegami.