3ality’s Steve Schklair on the future of sports in 3D

Steve Schklair explaines his vision of the future of sports in 3D to Adrian Pennington
For 3D sport to really take off, simple economics dictate that the current stage of 2D/3D side by side productions needs to be a short one. And, according to Steve Schklair, CEO and Founder of 3ality Digital, that is going to require compromise and automation writes Andy Stout for SVG Europe

Schklair is one of the key speakers at the 3D Masters in London where he is explaining his views on 3D sports live production on stage to Adrian Pennington in front of more than 200 delegates.

“The biggest way to chip away at that is to develop software that will deal with this position of ‘convergence puller’,” he continues. “At the moment everyone is shooting 3D sport with one convergence puller per camera, so if you’re shooting with 8 to 12 cameras, you’re employing an extra 8 to 12 people, which is costly. Software to do that is in a beta state at the moment; we’re continuing to refine it and it’ll be releasable in the next couple of quarters.”

With convergence operators costing upwards of $600 per day, 3D producers are constantly asking, “How do we get rid of the convergence operators?” At NAB, 3ality looked to take the first step towards making this a reality, introducing the first two installments in its 3Space suite of 3D automation software: IntelleCal and IntelleCam. IntelleCal automatically aligns two cameras on a rig with the push of a button, while IntelleCam automatically controls the convergence and interaxial spacing for the cameras. 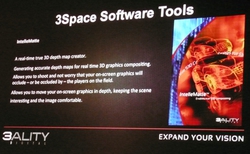 Schklair says that the software produces pictures that are not only as good as those produced by a human operator, but better. “It’s steadier,” he says. “For a human operator to follow a camera operator who is flying all over the place looking for his next shot…well, software is faster than humans in terms of being smooth and following it. And it’s not easy to stay focussed for three hours. Software doesn’t get bored, or distracted, or need to make phonecalls, or need to use the restroom…”

Other areas 3ality is investigating right now are new alignment programmes that will negate the need for specialists and extra headcount in that department. And its also looking at improving the on-screen presentation too. “Graphics have been a huge problem,” Schklair says. “Where do you put the graphics? To avoid collisions with the shots everyone floats the graphics way out in front of the screen, but we have this new software that lets you put a graphic anywhere and lets objects that appear closer to the audience actually occlude the graphic. That’s brilliant – I’m in love with that piece of software.”

At IBC, 3ality Digital will unveil this software installment named IntelleMatte (graphics-depth-plane automation) together with IntelleScene (automated protector for the switcher for 2D-to-3D cutting), and IntelleMotion (a long-lens automation solution).

Schklair maintains that the holy grail of co-production with 2D is getting closer, but it’s not quite there yet. What’s needed is a bit of a re-think.

“Both 2D and 3D will end up compromised to make it a single broadcast, but I don’t see the 2D as being compromise,” he says. “Maybe from the way it’s currently done, but over the years, as we’ve increased the number of cameras at events, the shows have got cuttier and choppier. The idea of using fewer cameras and slowing the edit down doesn’t seem a bad thing to me – personally I’d prefer that coverage,” and he concluded,“the focus for 3ality right now is to build better software to automate all of the non-creative functions. Creative function should be left to people, non-creative functions should be left to machines. That will do a great deal to reduce the costs of creating the media, which at the moment is very hand-crafted.”

Four of the five software installments within 3ality's 3Space

3ality Digital Takes the Headache out of Live S3D
3ALITY Digital and ARRI M...dia Join Forces in the UK
THE AMAZING SPIDER-MAN Sh...ng 3ality Digital Systems
A 3D Vision – What We C...Soon from the 3D Industry