.
Sony Professional's 4K live production solution was used to capture highlights of the 2014 Hertz British Grand Prix MotoGP at Silverstone in stunning ultra-high definition. Working with Dorna Sports, Sony captured the high-octane action from both the qualifier and the race itself in crisp ultra-high definition detail, marking a world first in live production for motorsports and representing another significant milestone in the acceleration of 4K sports production. 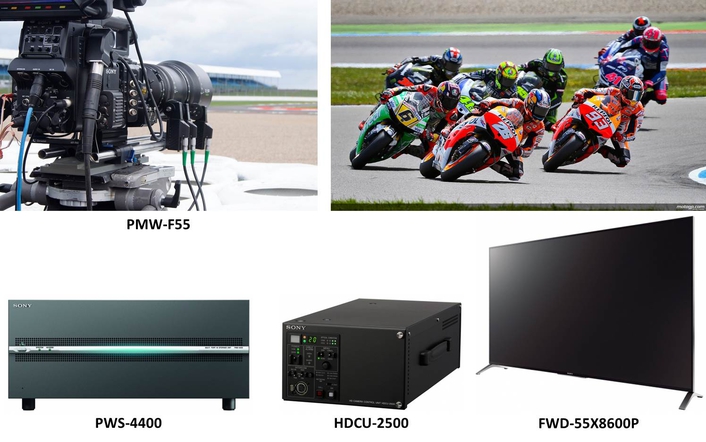 Sitting at the heart of Sony’s 4K live camera system, the PMW-F55 incorporates a Super 35mm 4K CMOS image sensor with a global shutter, and delivers multiple shooting options for HD/2K/QFHD/4K with superb dynamic range, widest colour gamut and pristine image quality. As part of the system used at this year’s 2014 Hertz British Grand Prix MotoGP, a CA-4000 camera system adapter was attached to the PMW-F55. This was then connected to a BPU-4000 baseband processor unit, along with a HDCU-2500 camera control unit via optical fibre cable. The full set-up enabled precise real-time adjustment of the camera’s 4K image and the cameras themselves.

Kazuho Haruyoshi, Senior Marketing Manager for Live Production, Sony Professional Europe, commented: “MotoGP is perfectly suited to both 4K and HD slow motion shooting, with each adding an exciting dimension to the viewer experience. The vivid colours at Silverstone were shown off with crystal clarity thanks to the wide colour space and high dynamic range of the PMW-F55, while amazing shots on the hairpin bends are particularly stunning when captured in 4x or 6x slow motion.”

“This is the first time that Sony and Dorna Sports have worked together to trial a 4K live production chain, and it marks the beginning of a strong long-term partnership. We’re already discussing trials at further MotoGP races, and we believe this marks the initial step towards a bright future for 4K and motor sports.”

Sergi Sendra, TV Production Director at Dorna Sports, commented: “We’re always pushing to enhance how people experience the action from each Grand Prix and this trial is testament to that. Having worked with Sony in the past, we wanted to test their 4K cameras for the first time on site, and the results are really promising for the new UHD 4K era, enhancing the beauty and the highlights of a high adrenaline sport like ours. We are looking forward to carrying out further tests in the near future.”

This Summer has already seen resounding success for Sony’s 4K live production system on the biggest sporting platform in the world, with three matches at the 2014 FIFA World CupTM shot in stunning ultra-high definition, including the final.