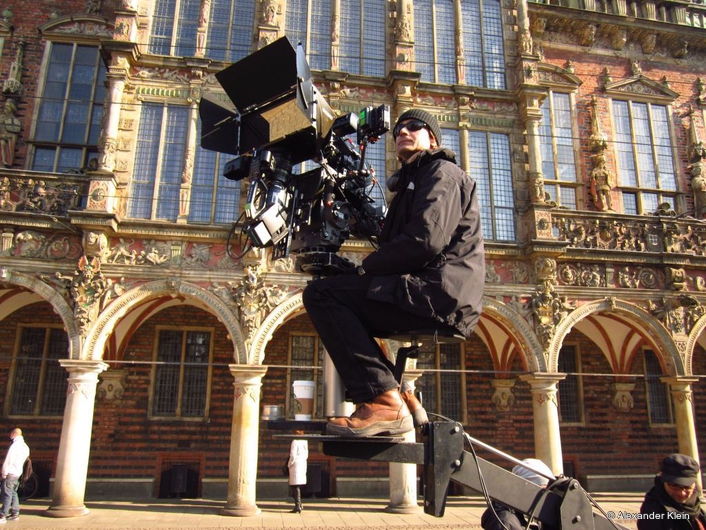 The OConnor 2575 with 3D Rig and 2x Sony EX-3 cameras, equipped with Zeiss DigiPrime® Lenses
"Outside and in – take a risk and win": Just like the motto of Bremen, freelance cinematographer Alexander Palm captured the streets, people, and buildings of the diverse city in stereoscopic 3D. This demanded a strong head, and that is why Palm chose the stable all-round 2575 fluid head by OConnor, part of Vitec Videocom, a Vitec Group company, to produce the city portrait.

Indestructible
Award-winning cinematographer Alexander Palm made his way to Bremen to film the city for a 10-part TV series called "Germany, Your Cities 3D". With the OConnor 2575, he brings the architecture and the memories of merchants to life. Why the OConnor 2575? "Because I appreciate the precision of the OConnor fluid heads. In addition, the 2575 is very robust. An OConnor head has never let me down," answers Palm. Even during erratic weather conditions, the 2575 fluid head proved its durability: "We filmed a lot outside. From gray skies and rain to sunshine, we had every kind of weather," says Palm describing the filming conditions.

Precise
"This project was also a test to see how quickly and with what amount of effort and resources I could work to make a film in 3D-documentary/report format; whether we would succeed in capturing authentic moments in spite of the relatively large team and extensive technical requirements which are necessary for such a format. We were so pleased with the result that we now hope to realize an entire TV series with this concept. This was naturally only made possible by a very good crew and consistent equipment selection," explains Palm. For the project, he used Sony EX-3 cameras, equipped with Zeiss DigiPrime® Lenses. With a payload range of 0 to 40.8 kilograms (90 lbs), the OConnor fluid head proved to be the right choice for the 3D mirror rig. Palm particularly liked the 2575 because it enables precise working conditions: "Being able to precisely counterbalance even very heavy cameras is a clear advantage," explains Palm.

Balanced
With assistance from director Stefan Pannen, 3D supervising producer Markus Aha, first camera assistant Alexander Klein, Palm was able to realize his project according to his personal motto, a quote by jazz bassist Charles Mingus: "Making the simple complicated is commonplace; making the complicated simple, awesomely simple, that’s creativity." The OConnor fluid head is especially suited for cinematic projects because it features stepless, ultra-smooth pan & tilt fluid drag which guarantees the operator ultimate control and stability. The patented OConnor sinusoidal counterbalance system enables perfect balance at every angle from +90° to -90°. With completely natural camera movements and easy, intuitive handling, creativity has no limits, and risk becomes a win –Thanks to Alexander Palm and the OConnor 2575 fluid head, the city of Bremen now shines three-dimensionally.

Live 3D Concerts – a Bu...ness Model of the Future?
Scorpions: Live on Tape in 3D
Shakira in 3D