This year's 17th annual EMAs were broadcast from Madrid's Caja Mágica Stadium
The MTV European Music Awards (EMAs) have always held a special place in the hearts and minds of music fans the world over. From the very first show in 1994, MTV has endeavored to make the EMAs an event to remember. And whether intentional (pitching a giant tent in the middle of Berlin's Brandenburger Tor in '94), impromptu (Iggy Pop's unplanned 7-minute performance of Lust for Life in '99), or just plain bizarre (Puff Daddy demanding a bath of milk backstage in '02), the show has consistently delivered.

This year's 17th annual EMAs were broadcast from Madrid's Caja Mágica Stadium, with host Eva Longoria deftly handling the star-studded cast, and presenting superstars Bon Jovi with the event's first-ever Global Icon award. The event was sent live around the world to more than 600 million homes via the MTV multimedia network.

The show was one of the network's biggest productions ever, calling for even more complex coordination than in previous years. In addition to international MTV media and news crews, this year the show also welcomed teams from MTV2 and MTV News in the US. As MTVNE production director Alec Hendry explains, the show's growing profile brings with it new challenges.

"For the last couple of years we've endeavored to combine our teams - main show production, news teams and digital media - to share assets," says Hendry. "All the teams have very different end points in terms of what they're producing, whether it's actual content to for the broadcast itself, incidentals, lead-ins and lead-outs, or web content, but they all share the same resources. This year we had even more teams to integrate, with even more diverse tasks."

A total of ten HD Final Cut stations were connected via fiber, with shared SAN storage and shared ingest sources. Three Mac Pro systems running ToolsOnAir's just:in Broadcast Suite were employed for ingest, each machine outfitted with Black Magic Duo I/O cards to handle dual video streams direct to the SAN. With multiple feeds from the stage, the red carpet and various backstage encampments, the editing crew had a wealth of footage to work with. "From the main stage feeds we had multiple versions, with and without graphics, so the editors could cut in whatever they needed for their particular use," Hendry reports.

"The ToolsOnAir machines were in constant use throughout the broadcast day," says Hendry. "Content coming in was available to all the edit stations and all the different teams immediately, enabling them to start editing and producing packets of content as soon as the show started." The just:in application allows for immediate access to any of up to eight simultaneous HD input streams, enabling files to be edited in Final Cut even while their streams are still being ingested. 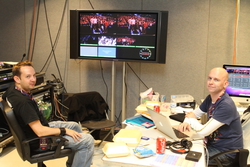 With MTV's US channel rebroadcasting the event only hours later, the ToolsOnAir systems' ability to facilitate fast turnaround was even more invaluable. "Even while the international crew was editing the incoming content, at the same time it was being saved to the SAN for different edits by the US team," says Hendry.

With MTV's US channel rebroadcasting the event only hours later, the ToolsOnAir systems' ability to facilitate fast turnaround was even more invaluable. "Even while the international crew was editing the incoming content, at the same time it was being saved to the SAN for different edits by the US team," says Hendry.

Hendry reports the crew had another rather pleasant 'a-ha' moment during pre-show prep. "We were thinking about how we were going to sync all these multiple feeds, so that if anyone needed to jump to a certain time of night they'd be able to find it easily," he says. "Some of the systems we've used in the past would record to disk using the computer's clock, but when you're trying to sync three iso camera feeds from the same show, having different time codes means you've got to move things around and mess with offsets. Two days before the shoot we discovered the ToolsOnAir folks had already thought of that. They've got a feature for locking all the Macs to a single time code source. We were able to run the same audio time code into the analog audio inputs of all three Macs. It's pretty ingenious, actually."

Additional raw footage was also being compiled, including backstage feeds and performances that didn't make the live broadcast. "In all, we had six live feeds coming in, pretty much non-stop, from 6:00PM until midnight," says Hendry. "Using the ToolsOnAir systems, we were able to have multiple teams editing off the same footage as it was coming in live, producing several different versions of content, with very fast turnaround. It had all the potential for sheer chaos, but in fact it all ran very smoothly. We've tried to do similar things in previous years using other systems, but it's never gone quite this smoothly. We had considered hardware-based systems, but the cost of hiring it, along with the trained personnel to run it, was very high. And in the end, the ToolsOnAir systems were better suited for the type of environment we were working with."