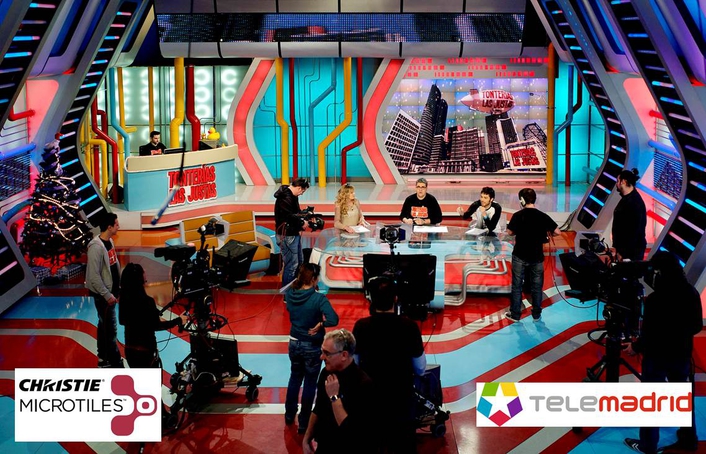 The flagship show in Madrid’s public TV channel introduces a MicroTiles videowall comprising 24 tiles mounted by Videoreport
El Círculo is a morning chat show broadcast by the regional TV channel Telemadrid from Monday to Friday from 8:30 to 9:30 am. Presented by Ely del Valle, and aired for the first time ten years ago, the programme has become one of the channel’s leading shows. Every morning, with the aid of two guest journalists, presenter Del Valle interviews the leading personalities of the moment from the worlds of politics, culture, society, sports... El Círculo is the first contact with the day’s talking points, introducing the issues and topics to be developed in the news throughout the rest of the day.

Until last summer the show was aired from the café at Círculo de Bellas Artes in Madrid from which it borrowed its name. The backdrop was a huge window giving onto the street, showing the hustle and bustle of Madrid. However, when the duration of the TV programme was extended (from half an hour to one hour) and new sections were included, the TV show moved to the regional TV channel’s studios in Ciudad de la Imagen, in Pozuelo.

“However, we wanted to keep the idea of the window on Madrid, which is why we needed to include a huge display behind the presenters. The idea was that the audience would still get the same feeling of the street behind us,” explains Federico Gaitán, head of Telemadrid’s newsroom.

Julio Chorro of Videoreport, a Christie partner, from the audiovisual group Vértice 360, recalls when his company presented Christie’s groundbreaking modular, digital display technology at Telemadrid for the first time: “While El Círculo was preparing the new set, we paid them a visit to give them some details about Christie and they were won over from the very first test.”

As a result, Videoreport mounted a MicroTiles videowall in the El Círculo set comprising 24 tiles (2.5 x 1.2 metres) arranged in a 6 x 4 layout. “I believe that MicroTiles gives them exactly what they were looking for, a totally revamped, innovative image,” says Julio Chorro.

According to Federico Gaitán, they also considered using other type of technologies: “We studied some rear projection systems, but they didn’t give us the brightness we were looking for, and also traditional videowalls, but we were really not impressed. What attracted us about MicroTiles was the excellent resolution and the minimal seams between the tiles.” With a 1 mm seam MicroTiles videowalls can offer a virtually continuous image. No information gets lost and the images look spectacular at any distance. 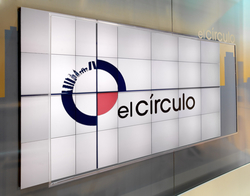 The space factor was also decisive when choosing MicroTiles by Telemadrid: “While other rear projection systems required a lot of space on the TV set, the Christie modular system was the most suitable due to its small footprint, which adapted well to the size of our studio,” says Gaitán. The lightweight (9.4kg) and shallow depth (260mm) of MicroTiles allow for flexible installations that can blend into any environment. These digital display tiles can even adapt to very small studios.

The videowall is mounted behind the desk of the TV presenters and has a large panel imitating a window. The modular display mainly shows live images of different scenes in Madrid. “It is as if we have the street behind us, like when we were broadcasting from El Círculo de Bellas Artes,” says Federico Gaitán. Images are output from a Sony video mixer DVS-7000. 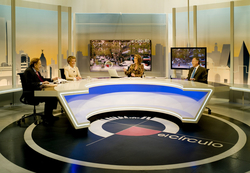 Julio Chorro, from Videoreport, lends particular emphasis to this innovative solution of MicroTiles with its LED and DLP® technology, and to the quality it offers in comparison with other currently available technologies: “I think that its primary strengths are its low weight compared to other systems, its low noise level, high resolution and the superb quality of its images,” he claims. Christie MicroTiles offer you colour reproduction capability that is a full 115% of the NTSC colour spectrum and exceeds standard LCD flat panels by over 50%.

Marcos Fernández, Business Development Manager at Christie EMEA, also underscores the Mean Time Between Failure rating 65,000 hours of MicroTiles, meaning it would take more than seven years of continuous use before the displays start to degrade. “This means no lamps or consumables to replace for more than 7 years,” he states.

According to Fernández, Telemadrid’s latest set is further proof, if any were required, of the advantages MicroTiles offers for TV studio sets. “We have installed several MicroTiles modular systems in various TV studios in Spain, and our clients are very pleased with this technology,” he says. “Up close or from a considerable distance, Christie MicroTiles deliver crisp, high-resolution images at any viewing angle,” he concludes.