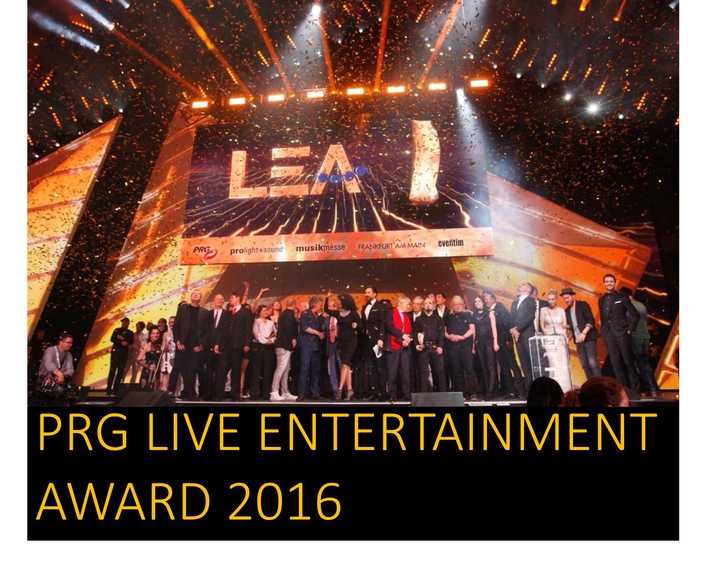 On 4th April 2016, the PRG Live Entertainment Awards (PRG LEA) were presented in the Festhalle in Frankfurt in front of an audience of over 1,400 guests from the national and international music, event and entertainment scenes. With a total of 14 awards, event organisers, artist managers, concert agents, venue operators and artists were recognised for their excellent achievements in the live entertainment industry.

The PRG LEA gives all creative players and organisers, who contribute great ideas and extraordinary energy to the work behind the scenes, the opportunity of having acknowledged their special achievements in the entertainment industry. Only music journalists and professionals from the live entertainment sector form the expert jury who decide on nominations. Star-studded national and international live acts such as Belinda Davids, Niedeckens BAP, Santiano, Glasperlenspiel, Sophie Hunger, the symphonic-metal-newcomer Beyond the Black and twelve artists of the Circo National de Cuba, which shows parts of the Show Havana Nights delighted the many guests with their thrilling acts on the stage. TV journalist Ingo Nommsen gave a masterful performance as moderator through this entertaining show. Amongst the many prominent and illustrious guests were Helene Fischer, Udo Lindenberg, Alexander Klaws, Gleis 8, Lotto King Karl, Orchestral Manoeuvres in the Dark and Roland Kaiser. 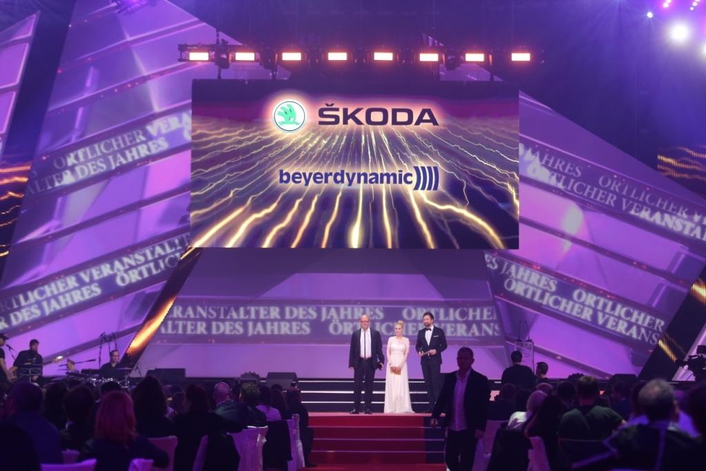 Since its premiere in 2006 in the theatre tent of the “Fliegende Bauten” ensemble in Hamburg, the LEA has become one of the major awards of the entertainment industry in the category of ECHO and Deutscher Filmpreis in just ten years and has established itself as one of the most important German cultural awards. The stylised concert ticket – solid bronze cast weighing 3.5 kilograms – has now become a much coveted trophy in the show and event sector. The LEA nominees and award winners reflect the entire spectrum of the live show and entertainment scenes, with all their creativity, innovative ideas and success stories.

Since 2013, beyerdynamic supports the PRG LEA as an exclusive microphone partner and supplies all required microphones to perform such a live event. In 2016 it was new that in addition to the different live acts the Berlin Show Orchestra had to be equipped with microphones as well. Altogether 38 wireless channels, 10 IEM channels and around 120 wired microphones were used. Once again beyerdynamic’s microphones showed up with an impressive and reliable performance. 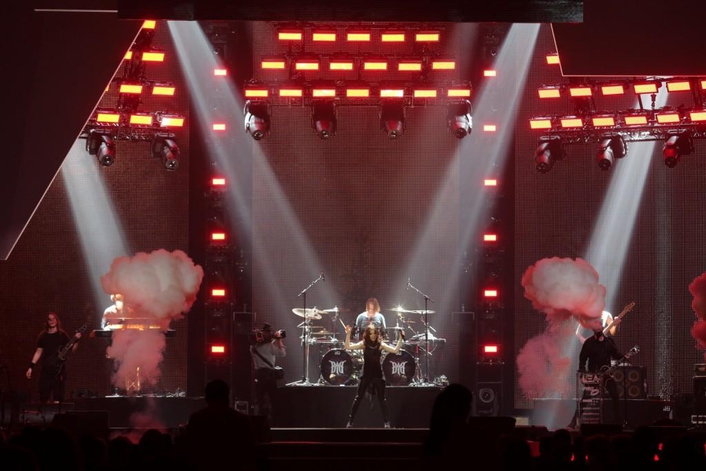 To set up wireless microphones for such a big live event like the PRG LEA 2016 entails special requirements. Every single channel has to work reliably and without any disturbance all the time at every location. In times of reduced spectrum due to DVB-T and mobile radio it is a challenge to meet these requirements while offering 38 channels of wireless microphones and 16 channels of wireless In Ear Monitoring (IEM) simultaneously. beyerdynamic’s TG 1000 digital wireless system was built to handle complex RF scenarios with a minimum effort. Due to its impressive bandwidth of 319 MHz it was no problem to find a frequency for each channel between all the other radio equipment. One of the bands tried to use their own wireless system with less bandwidth, but had no chance to find free channels. 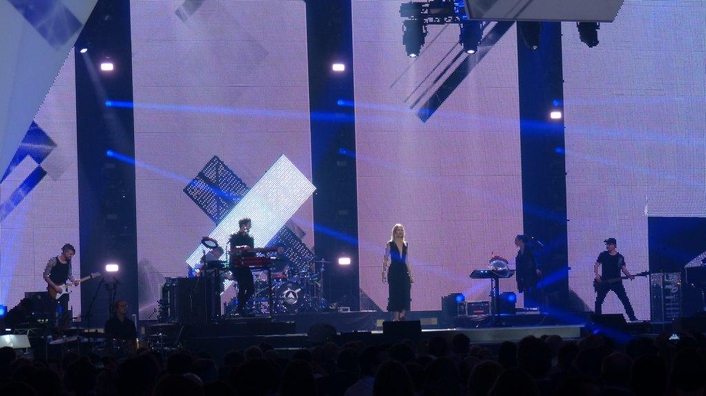 Therefore, they used the TG 1000 which offers the switching bandwidth for both, receiver and transmitter, and the artist were impressed by the clean and natural sound of the TG 1000 and the dynamic TG V50w capsule. All vocals of the live acts used the TG 1000 with the TG V50w capsule except one band, who wanted to use their own Beta 58c microphone head. But this was also no problem for the TG 1000, because in combination with the WA-HHA-SHBY adapter ring the artist could you use their preferred capsule with the TG 1000 handheld transmitter and therefore benefit from the same reliable and stable RF performance. This is another advantage of the TG 1000, because every sound engineer can handle special wishes of artists without having 30 different wireless systems in use. Frequency coordination with only one system is much easier to coordinate than various systems with different RF parameters. 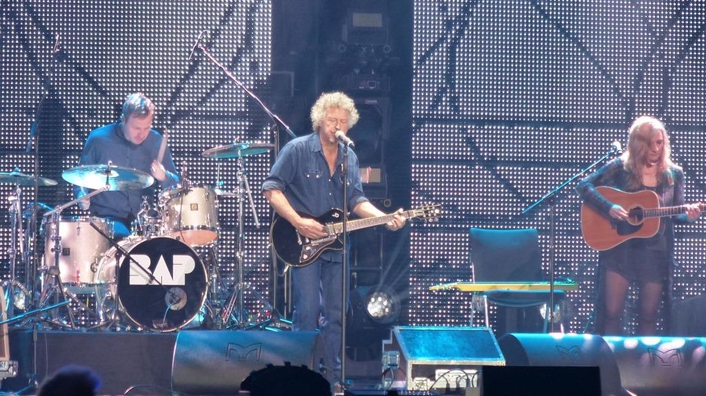 The TG 1000 digital wireless system from beyerdynamic was again able to demonstrate its formidable performance. Especially its impressive frequency range, which offers a high level of flexibility, and the clean and natural sound makes everyone happy, artists and sound engineers.

In every award show there have to be presentations. Therefore, the presenter Ingo Nommsen used a TG 1000 handheld transmitter equipped with a TG V96w true condenser capsule. With this he could walk around on stage and through the audience and for interviews there was another handheld transmitter with the same capsule. Due to the high gain before feedback of this cardioid microphone head there was no problem with feedback at any place. For some special presentations which require free hands the sound engineers of the PRG decided to use the cardioid TG H74c headset with the TG 1000 beltpack transmitter. For all other presentations, the stage offered a podium equipped with two Classis GM 304 cardioid gooseneck microphones. This year another cardioid gooseneck microphone (Classis GM 302) was also in use which could automatically be hidden in the stage floor. 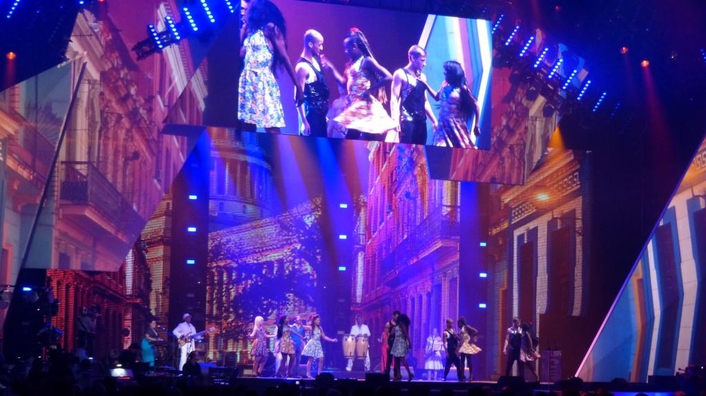 The PRG LEA is the only award show in Germany which has real live acts without any playback. Furthermore, in 2016 it was the first time that the jingles were played live by the Berlin Show Orchestra. The orchestra was part of the whole show and used a wide range of beyerdynamic’s live microphones. For example the brass section used the TG I57c with the TG 1000 beltpack transmitters, the guitar amp was equipped with a M88 TG and the drum sets used the TG D70d (Kick), MC 930 as overhead and the TG D58c for toms. The snare was miked with the TG D50d. For the Berlin Show Orchestra it was the first time that they used beyerdynamic microphones, but all of them loved beyerdynamic’s typical natural sound. 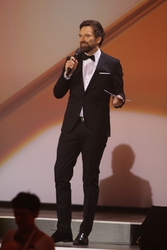 The orchestra had their fixed places and microphone set up during the whole show. The other live acts changed and therefore a large number of microphones were in use to make the change over as easy as possible. Each live act was able to leave their backline (instruments, amplifiers, etc.) set up on risers (rolling platforms) backstage which meant that the microphones were also left on the instruments. For all vocals wireless handheld transmitters with dynamic TG V50w capsule were used. For the instruments beyerdynamic shows a wide variation of microphones for the special sound of each artist. Especially drummers are sensible regarding microphones but depending on the individual sound of the drummer there was either the dynamic TG D35d or the condenser TG D57c/TG D58c in use for toms. Furthermore, the latest addition to the drum microphone family, the TG D71c, had its crucial test in the kicks of the symphonic-metal band Beyond the Black. Everyone was surprised by the good sound of beyerdynamic’s boundary with its fast attack and the smart design. Furthermore, the dynamic TG D70d large diaphragm microphone was put in the kick drum. For most microphones at the drum sets the legendary and patented MKV-87 microphone clamp was used to avoid the usage of too many microphone stands. For a good separation of the hi-hat, the hypercardioid MC 950 true condenser microphone was used. Similarly to the Berlin Show Orchestra the MC 930 was applied as an overhead microphone and the snare was miked with the TG D50d and / or M201 (snare up / snare bottom). Guitar amps were miked with the TG D50d or M160 and percussion with the MC 840 large diaphragm true condenser microphone.

All in all, the TG 1000 digital wireless system and microphone technology from beyerdynamic was a clear winner with its ease of handling and especially its impressive sound at this technically challenging live event. 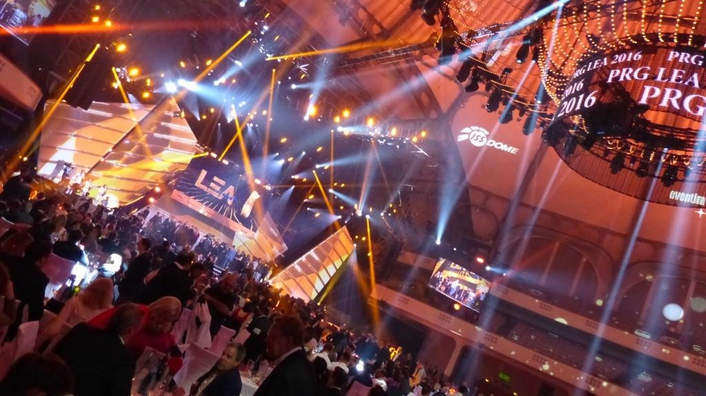 ARENA/STADIUM TOUR OF THE YEAR

CLUB TOUR OF THE YEAR (presented by Ströer)

FESTIVAL OF THE YEAR (presented by PRG)

CONCERT OF THE YEAR

SHOW OF THE YEAR

CLUB OF THE YEAR

INDOOR CONCERT VENUE/ARENA OF THE YEAR

ARTIST MANAGER/AGENT OF THE YEAR

LOCAL ORGANISER OF THE YEAR

EVENT ORGANISER OF THE YEAR