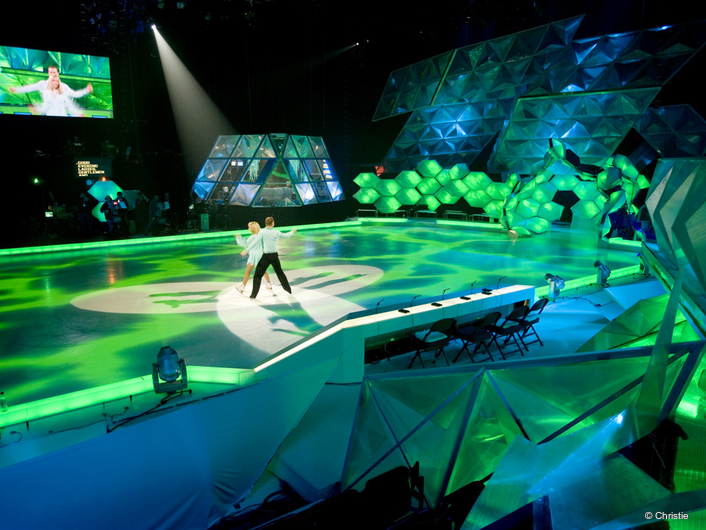 Dancing On Ice
The breathtaking images projected across the ice on the recent Dancing On Ice reality TV series — seen by an average of more than 10 million viewers tuning into ITV on a Saturday night — was the result of a close collaboration between Christie, and TV production specialists, Anna Valley Displays.

LED screens have long been a popular (though expensive) option in TV studios and so the new generation of digital projection offered by Christie, which can hold its own among the strident studio lighting, provides a viable and cost-effective alternative.

The installation of the Christie projection for Dancing On Ice was unusual, firstly because of the scale of the set (the ice rink itself measured 30m x 15m), and secondly because the projection surface was the ice itself.

The show is housed inside the massive George Lucas Stage at the Elstree Film and TV Studios, along with audience and judges seating and a set for the ITV2 spin-off, Dancing On Ice: Defrosted. 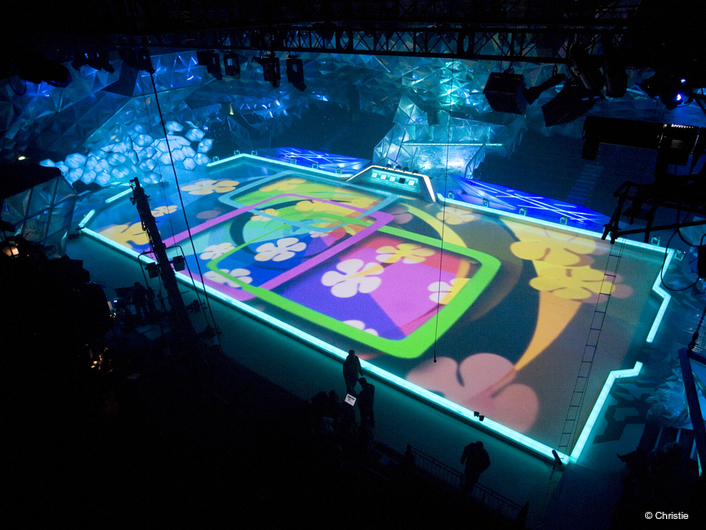 Ice Rink at the Elstree Film and TV Studios

Anna Valley built the rig at floor level and raised it into position, using CAT5 cabling, and controlling/adjusting the projectors remotely over Ethernet. From each corner the projectors were set to fire vertically downwards over a 12-metre distance.

Doug Hammond says that one of the challenges faced by Anna Valley was to keep the image quality high on a surface that was regularly being cut up by sharp ice skate blades. Another was how to get the images projecting onto the grey ice sufficiently bright to read to camera alongside the studio lighting, thus enabling the TV viewers to receive the same dynamic as the live audience.

To accomplish this, a decision was taken to use the 0.67 HD lenses — a solution which he knew would provide at least 15% greater output and efficiency.

Anna Valley also provided a large LED wall which was designed into the set as a visual adjunct for the audience and judges. The projected patterns included library images stored on Hippotizer digital media servers and about 40% bespoke material purpose-created for the show. 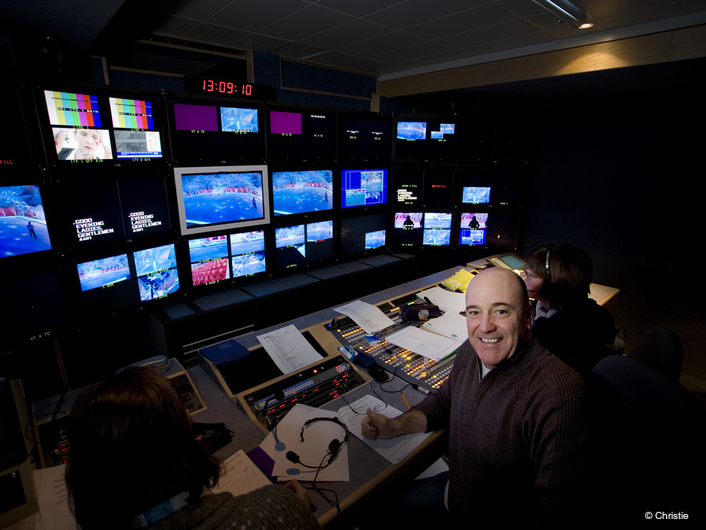 The project was the latest example of the growing convergence between A/V and lighting, in both live and television spectaculars. By using digital media servers to stream graphics to the projectors or LED media walls, LD’s have the opportunity to stamp their own unique imprint and personalised branding on a show.

Dancing On Ice director Paul Kirrage agrees. “The projection we had this year gave added depth and more intense colour to the images on the ice. Dave (Davey) and I used the patterns and artwork projected on the ice to complement the costumes and change the mood of the 12 routines in each of our shows — right down to ‘painting’ a red carpet on the ice for the competitors to skate along.”

And in summary, Gavin Chatfield, Christie EMEA market development manager for event staging, stated, “The Dancing On Ice production team and Anna Valley have helped to remind the broadcast industry how versatile projection technology can be when imaginatively applied to a studio set.”