Christie MicroTiles on The 10 Million Show 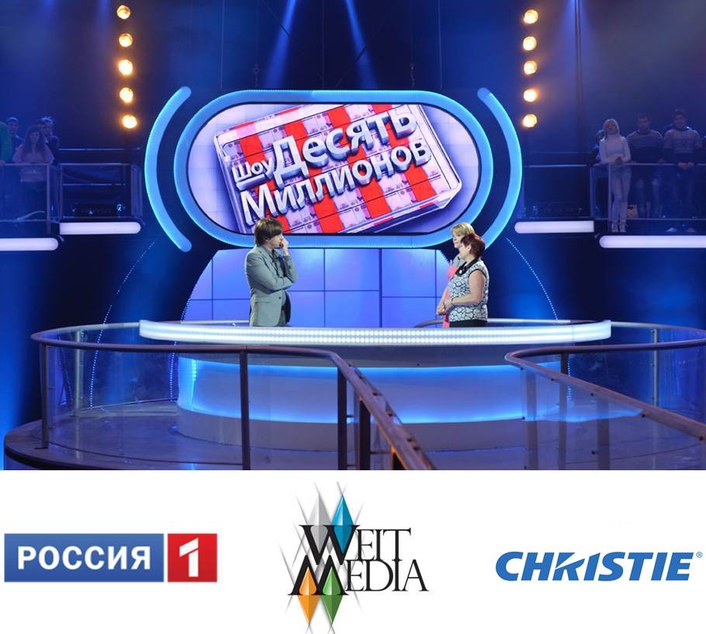 Popular Russian TV show boasts 60 MicroTiles for digital decoration
The 10 Million Show is a game show broadcast on weekends on the Rossiya 1 TV channel (part of the state VGTRK media holding). Making its debut on 4th September 2010, the Russian programme was inspired by The Million Pound Drop, which started on Britain's Channel 4 on 24th May 2010.

WeiT Media, founded by the renowned producer Timur Weinstein, is responsible for production of the show. The set of The 10 Million Show includes Christie® MicroTiles™, a revolutionary visual display technology. The video wall consists of 60 MicroTiles display modules, assembled in 10 x 6 format to create a screen size of 4.1 x 1.8 metres. Big Screen Show (BSS), a long-term Christie partner, is responsible for the integration of the show’s visualisation.

The Russian show’s production team boasts that the show heralds a new kind of TV game: usually, the prize comes at the end of the programme. But in the case of The 10 Million Show, the prize is only the beginning. At RUB 10 million, the prize is the largest in the history of Russian TV. The rules of The 10 Million Show are, in fact, rather harsh. Two players are given RUB 10 million – cash in hand. All they have to do is manage to hold on to it until the end of the show. The money is given in 40 packages of RUB 250,000 each. To go home with the money, the players must answer eight questions. The questions and answer choices are displayed on a MicroTiles display, so the attention of the players and studio viewers is fixed on the Christie-made video wall.

The producers wanted to put a new spin on the look of the set – something vivid and out of the ordinary. Of the many reasons for choosing MicroTiles, the most important consideration was the ease of use and high display quality.

Combining the advantages of DLP® projection and LED technology, Christie MicroTiles display modules produce remarkably vivid images with a broader colour palette than ordinary LCDs and plasma panels. Christie MicroTiles have no practical restrictions on the number of modules that can make up a display, and are able to form a practically seamless display with an unlimited number of super-fine pixels, available in a small form-factor with low energy use.

Evgeny Marinichev, BSS technical director, explained: “When we first showed MicroTiles to the producer team at WeiT Media, they made special note of just how innovative this solution was. Everybody was impressed by the smooth colour reproduction and automatic operation. Across the board, MicroTiles blows the competition away in terms of performance: colour reproduction, display coordination, image stability, technical support, ease of configuration, and unlimited resolution options. For our programme, the image is transmitted in full HD resolution – 1920 x 1080”.

The show’s choice of technology was based on the need to strike a balance between three main variables: Firstly, the screen needed to have Full HD resolution (1920 x 1080) or greater, be compact and have shallow depth (the depth of a MicroTiles is 26 cm), but also have brightness sufficient for studio filming. After a comparison of LED screens, seamless panels, and MicroTiles, there was no doubt about their decision. “Even under bright studio lighting, the image on the display is rich and vivid. This more than justifies the use of MicroTiles for TV”, Marinichev noted.

The display of Christie MicroTiles was assembled in the shape of a rectangle, but thanks to a decorative frame, the screen more closely resembles an oval. This is but one example of how MicroTiles can be integrated with any sort of set or decoration.

The programme is filmed in seasons, so BSS technicians provide the MicroTiles for the duration of filming and offer on-site technical support.

The show has continued to gain popularity ever since its first airing, keeping the audience glued to the action and eagerly awaiting each outcome. And thanks to its visually rich solution, MicroTiles technology is making the show stand out even more.