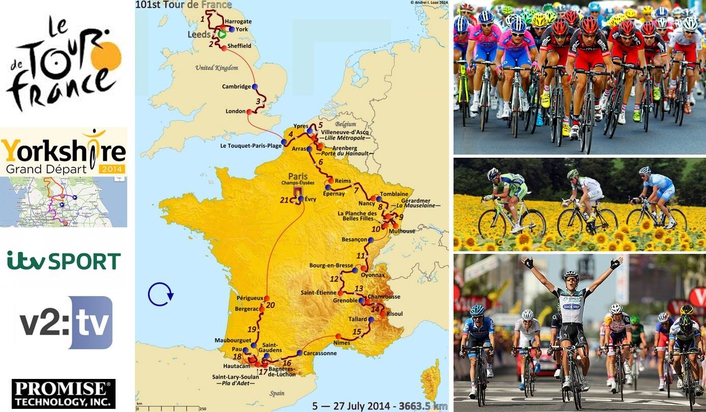 PROMISE and Vsquared TV Create The Fastest, Most Advanced Editing Suite for the Tour de France

The Tour de France is the most prestigious cycling event and one of the most famous sporting events in the world. The top cyclists from around the world compete in a grueling three week 3,500 km journey each July that takes competitors through the mountain chains of the Pyrenees and the Alps and on to the finish on the Champs-Élysées in Paris.

The Tour de France is broadcast worldwide on 121 different television channels in over 190 countries with huge audiences watching each stage, including a record 44 million viewers who took in one of the final stages in the 2009 race.

It takes a massive effort to broadcast all of the excitement to the millions of fan watching around the globe. During each stage, the drama is captured by five wireless cameras and two journalists on motorbikes while aerial images from two helicopters capture the beautiful French scenery. 20 podium cameras are positioned around the finish line while an additional 35 vehicles support the broadcast. Broadcasting a major sporting event every day for three straight weeks is a massive undertaking that requires an incredible amount of planning and the latest in broadcasting technology. 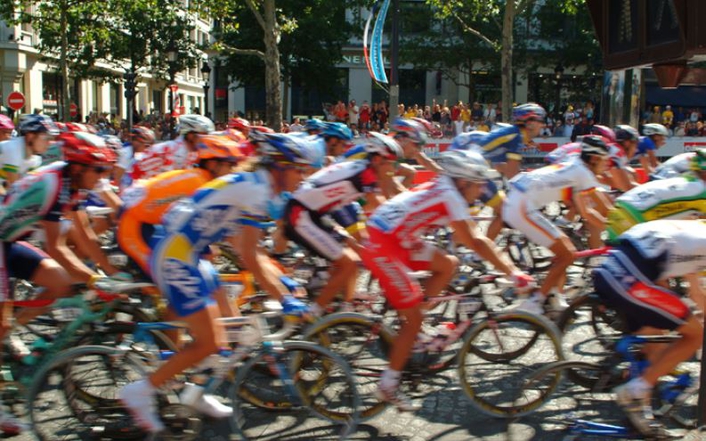 Since 1986, the Tour de France broadcasts for the United Kingdom have been produced by Vsquared TV, an independent production company which specializes in covering cycling. Peter Wiggins is the Senior Editor working on his 19th tour and James Venner is the producer for Vsquared’s Tour de France programs in the UK for ITV. For the 2014 Tour de France Venner and Vsquared TV built the fastest, most advanced editing suites working on a sporting event this summer with the help of several leading companies in the industry, including PROMISE Technology, a leading developer of storage solutions for creative professionals and sports entertainment. The incredible array of equipment deployed by Vsquared TV for their four main edit suites includes the PROMISE SANLink2  and Pegasus2, the new Mac Pro, AJA IO 4Ks, Softron Movie Recorder, in addition to several iMacs and a silver Mac Pro. It’s an incredible set of gear which absolutely blew Vsquared away!

Switch to Final Cut Pro X
In 2005, Vsquared TV was amongst the first to use Apple’s Final Cut Pro software connected to a SAN in live and near live situations. When Vsquared was considering a switch to Final Cut Pro X (FCPX) for the 2014 Tour de France there were a number of challenges to be solved. It was determined that the software would best be run on Apple’s new Mac Pro computers which required a Thunderbolt™ bridge in order to connect to a high-speed Fibre Channel SAN.

This was the first time Vsquared TV would be using a Thunderbolt bridge and Apple advised them to approach PROMISE for the SANLink2, a compact device that allows a Thunderbolt 2 host computer to directly connect to a Fibre Channel SAN. SANLink2 was critical to this project as without it Vsquared TV could not use the immense power of the new Mac Pros as there would be no way to link them to the SAN. Vsquared also decided that some fast locally attached storage would be needed and PROMISE had the ideal solution for this as well – Pegasus2, the industry’s leading hardware RAID 5/6 storage solution with Thunderbolt 2 that comes in 4, 6 and 8 bay models in addition to the compact and portable M4. 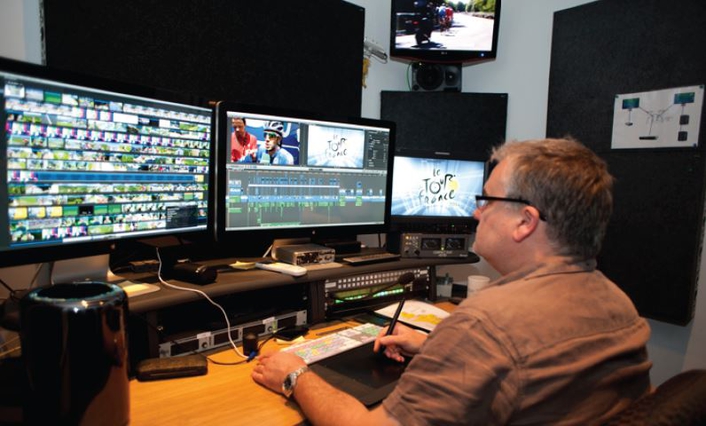 “We had previously used PROMISE Thunderbolt storage for archive purposes, so we were familiar with the Pegasus2 R6,” said James Venner, Producer, Vsquared TV. “We planned to install a small amount of local storage on each edit station and the new Pegasus2 M4 was the perfect solution as its small form factor and high performance perfectly met our requirements, so ultimately we ended up combining several R6 and M4 drives.”

The Fastest & Most Advanced Editing Suites
Vsquared TV had four edit suites with high-end Mac Pros linked to a 70TB SAN where all of the media was stored. Softron Movie Recorder was running on two Mac Pros which gave Vsquared TV up to 8 channels of HD recording. Each edit suite had access to a daily growing file of the incoming feed from France and was connected to the SAN via a dual 4GB fibre link using the SANLink2. Each edit suite had 12TB of local Thunderbolt 2 storage with a Pegasus2 R6 drive configured in RAID 5 which was used to hold the working daily FCPX library, as well as an archive of previous days’ libraries.

The project involved handling large video files of around 500GB per day for 21 consecutive days. A massive challenge for Vsquared TV was that the final program went to air only 2 hours after the end of each day’s stage of the Tour de France. In fact, the end of the 1 hour program was usually still being edited as the beginning went to air. This means editing quickly and efficiently was an absolute necessity. 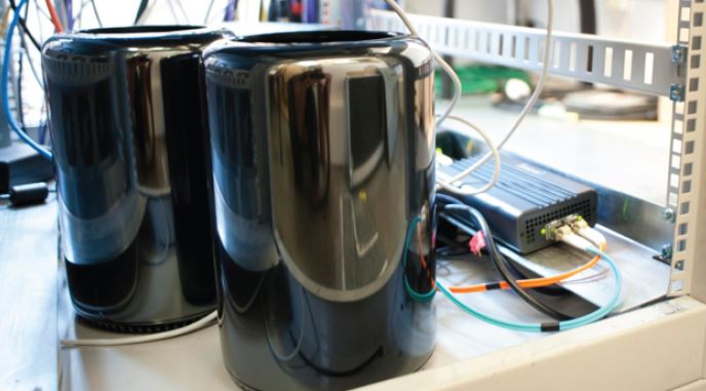 Exceeding Expectations with Pegasus2 & SANLink2
This was one of the first broadcast implementations of FCPX and certainly the first at this kind of scale and operating close to air. “We were replacing a FCP 7 based system that had served us well for nine years but was showing its age,” said Venner. “The PROMISE SANLink2 and Pegasus2 were an essential part of building a working implementation.”

With the PROMISE solution, Vsquared TV was provided with faster access to archive footage, access to a growing media file in FCPX, and smooth performance of the SAN with FCPX and large video files. By the end of the Tour de France Vsquared TV were storing over 300 hours of footage and with this solution all of the material was instantly accessible.

With the new Mac Pro and Pegasus2, Vsquared TV saw increased speed in editing as the new Mac Pro made waits for rendering a thing of the past. “We were able to export 15 minute parts from the timeline to the EVS ready for playout in under five minutes. When you are editing close to air this makes a very big difference since this gave us extra time to polish the final edits and still make air,” said Peter Wiggins, Senior Editor. “The Mac Pro paired with Pegasus2 and SANLink2 have been hugely important to help us realize these massive gains in efficiency.” 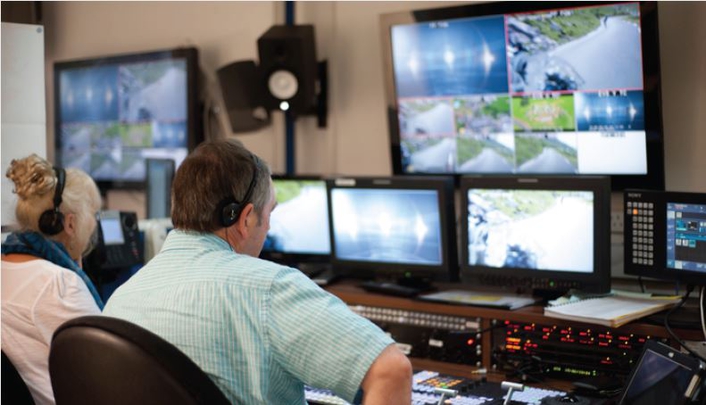 “In the end I think we created one of the fastest and most powerful edit systems that can be put together,” said Venner. “My original aim was to achieve a move to FCPX with a minimum of disruption to our workflow. That in itself would have been a good first step, however, we far exceeded that and by the end of the race we were producing items that could not have been made in the same time using FCP 7.”

At a Glance
Vsquared TV is an independent production company which specializes in covering cycling
Vsquared TV was switching to Final Cut Pro X for the 2014 Tour de France broadcasts and needed to upgrade their edit suites
With the help of PROMISE, Vsquared TV built 4 of the most advanced edit suites for sporting events

About SANLink2
Connect from a Thunderbolt 2 device to a Fibre Channel SAN or directly to Ethernet
Access to low-latency, high-bandwidth storage reduces file load times, allows for instantaneous response time during timeline scrubbing, and reduces the amount of time required for large media file transfers
Complete out-of-the-box solution, simply plug in your SANLink2 with a power adapter into a Thunderbolt port
For the first time, portable and desktop systems previously unable to connect to a high-speed Fibre Channel SAN can now do so using Thunderbolt 2 technology

About Vsquared TV
Specialist producer and distributor of road and track cycling based in the UK
At the forefront of innovation, both technical and creative
Clients include ITV, BBC, Channel 4, British Cycling, UCI, and Locog
Involved with production of the Tour de France since 1986
Works with ITV to supply podcasts, web content and mobile phone streaming to sit alongside broadcast programs