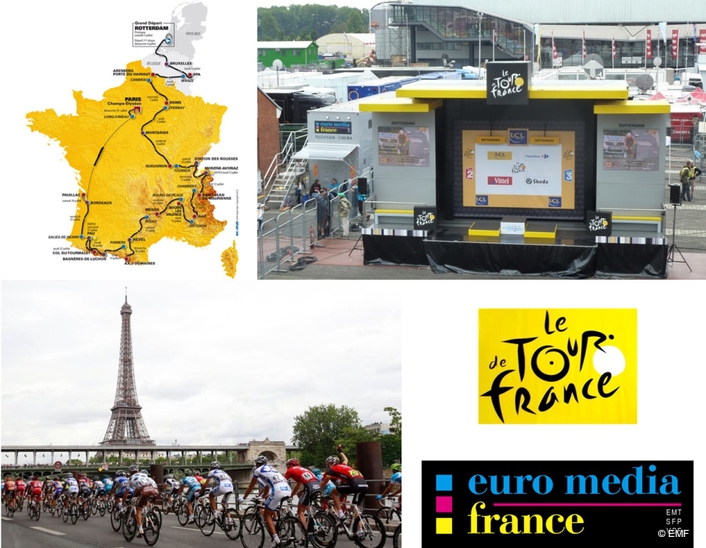 The total length was 3,642 kilometres (2,263 mi) including 60.9 kilometres (37.8 mi) in time-trials. Following an opening prologue time trial, featured again after a two year absence, the first three stages passed through the Netherlands and Belgium on routes designed to replicate some features of the spring classic cycle races. This included seven cobblestone sectors totaling 13.2 kilometres (8.2 mi), the longest distance of cobblestones in the Tour since 1983, on stage 3. There were six mountain stages, three of them with mountaintop finishes, and two medium mountain stages. In the 100th anniversary year of their first inclusion on the Tour, the emphasis was on the Pyrenees, with two ascents of the Col du Tourmalet.

The Tour was won by the 2009 victor Alberto Contador from Spain who finished 39 seconds ahead of Luxembourg's Andy Schleck. Schleck also won the young riders' competition for the third time running. France's Anthony Charteau won the polkadot jersey as the King of the Mountains whilst the Italian sprinter Alessandro Petacchi won the green jersey for victory in the points classification. 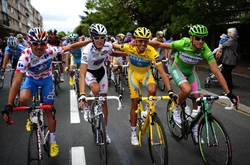 Euro Media France (EMF) deployed all of the technical resources necessary for the coverage of the most famous cycling route for France Télévisions. EMF provided coverage of the ASO (Amaury Sport Organisation) event with 5 image bikes, 2 sound bikes and 2 vehicles equipped with on-board cameras.The HFR 41 OBtruck, also used for back-up control, received all of the signals at the finish locations and 3 HFi (intermediate receiver OBtrucks) allowed the relaying of images to the finish locations. EMF also deployed an Edit OBtruck (OBtruck 19) composed of 6 post-production units, as well as “Euro 50” forLe Nodal, a video library, the broadcasting of the unilaterals and the “play out” part.This land-based device were accompanied by complex air-based devices, consisting of 2 planes, 2 relayhelicopters and 2 filming helicopters, of which 1 was equipped with 2 gyro-stabilised cameras (Cineflex).

Another novelty was linked to the change in this years route: the Arenberg pass section mobilized 6 trail bikes for a single stage. These were dirt bikes which EMF habitually was using for the images of the metaled roads from Paris-Roubaix. In total, around 100 individuals were on the road for a month in order to provide the images of the Tour to France Télévisions.

Preparations for the Tour de France

Euro Media France (EMF) was home to the OBtrucks of France Télévisions for the final technical preparations for the start of the Tour de France 2010. Within less than 10 days, the 97th Tour de France will start in Rotterdam, finishing after 3600 km, 20 stages and 23 passes on Sunday 25th July with the famous final stage on the Champs Elysées 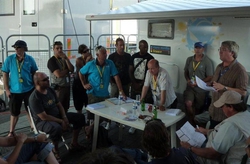 On Friday 2nd July, the EMF teams arrived in Rotterdam for the grand start of the Tour de France 2010. The start was in the Netherlands, which had just qualified for the semi finals of the World Cup. After a day of tests, allowing the final set-ups and adjustments to be made, everything was ready for the first live broadcast on Saturday. Jean Maurice Ooghe, the director for the Tour, gave the final briefing to the Euro Media France teams on Friday. A team of 97 technicians (cameramen, pilots and drivers) managed by Gérard Choucroun, assisted by Audrey Delsarte and Sophie Moulin. 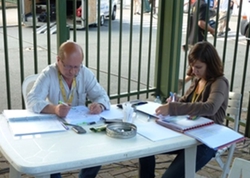 Gérard Choucroun, the production manager, supported by Audrey Delsarte, manages TDF’s 82 HF technicians, pilots and drivers. Meticulous preparations and a final technical briefing each morning ensure perfect broadcasts.Starting at 9 in the morning, in the starting area, the work starts with updating the latest information, then a period of technical tests until the broadcast starts. 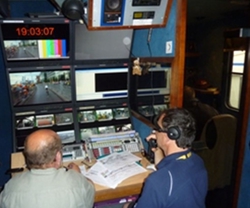 Hervé Besnard coordinated the technical organisation. From the HFR41, placed at the finishing line, he has overseen the technical operations, in collaboration with Gérard Choucroun, the production manager, arranging the instructions to the different parts of the system - the interim points, the aerial equipment, the support for the motorcycles on the course and the GlobeCast broadcasting system. Each race day, Hervé sits in front of his monitors for the whole stage to calibrate reception, juggle with frequencies and movements of the helicopter. 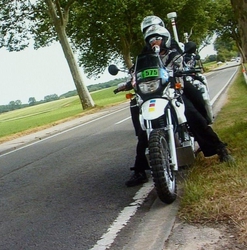 More shaken than hurt! During the Brussels/Spa stage of the race, the rain and the awful racing conditions caused the crash of one of the image bikes rode by Fabrice Roche and Eric Abomey. Fortunately, it wasn’t serious and they came out of it with only a few bruises and some stitches for Fabrice. This unfortunate event reminded everyone how dangerous their job remains despite their experience and the precautions taken. On 6th July Fabrice and Eric were on a Trail motorcycle, covering the Arenberg stage on the cobbled roads of the Nord. 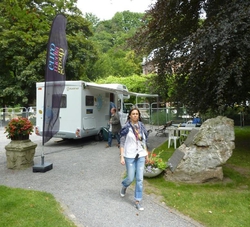 Faustine Chaze, production assistant, was responsible for administering and managing of the team. In the camper van/mobile office, throughout the 2010 Tour de France, Faustine managed the daily routine of the entire team, day after day. Meetings, meals, coffee breaks, office automation and minor problems of all kinds formed Faustine’s daily routine, and she solved these one by one with a smile, to the immense satisfaction of the entire team. 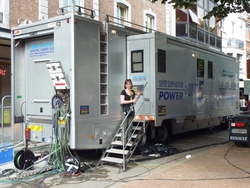 Sophie Moulin, the production manager, was responsible for the post production units and for the Nodal/video library OBtruck. In this capacity, she managed the 6 cutting benches every day which were provided to France Télévisions, the Nodal part, the video library, but also the play out and unilaterals for all of the unilateral channels. There was no need to point out that her days were full and that her kindness and good humour provided a great deal of fluidity to the functioning of the whole operation. 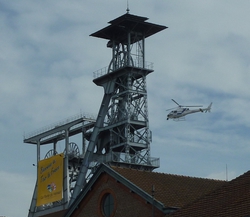 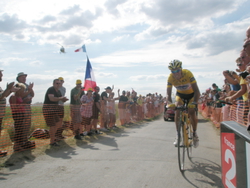 While the last members of the Euro Media Sports team in South Africa returned to France, the 95 technicians and cameramen of the Tour de France were facing two key stages of the race: Rousses and Morzine. The 12th July was the first official day of rest, much deserved by everyone, before moving on to the last two stages in the Alps, Saint Jean de Maurienne and Gap on the national public holiday. 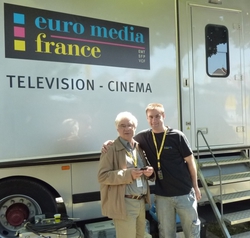 Essential parts of the technical operation, Bernard Pichat, Director of Operations and a symbolic figure of the HF service, and Rudy Dendleux, Director of the HF BU (Business Unit), were the technical managers responsible for global coverage. The operation consisted of 80 individuals spread across all of the key points of the system, who were indispensible at their locations for good overall functioning. Rudy was responsible for the all year round directing of the service which covers, among other things, more than 100 days of cycling races throughout the world every year.

The Motorcyclists of the Tour de France

The quality of the EMF motorcyclists cannot be stressed enough. Their experience and mastery of driving in race situations was essential for the security of the cameramen and runners. Directed by Fabrice Roche, there were 8 of them over the course of the race. 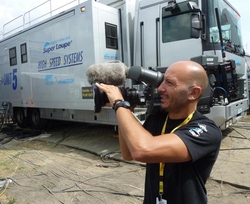 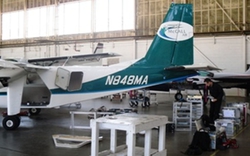 For each stage, Stéphane Gautier flew over the race in the No. 1 relay aircraft for more than 6 hours. Stéphane’s work was essential for the overall rebroadcasting process. Responsible for relaying images to the intermediate points, he provided the coordination with the teams on the ground and managed the adaptations of the operation in real-time depending on the hazards of the race. 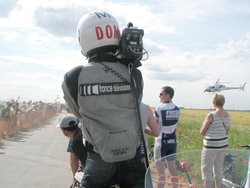 Dominique Kowalski was a motorcycle cameraman for the race. Together with his motorcyclist, he spended the day of the race “swaying his hips” on the K1100 image in order to provide the whole world with the wonderful images of the ASO race which everyone dreams about. 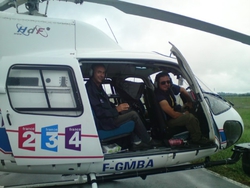 There were two of them, Eric Veyssiere and Bruno Cusa, and they formed a duo with their pilots in order to provide aerial filming. Along the entire stage, they worked in relays in order to cover the race from the air and show the wonderful landscapes crossed by the caravan. 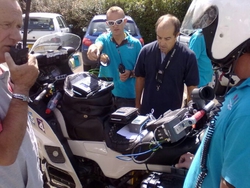 Jean Louis Krupski and Jean Yves Robin were responsible for providing assistance to the race. Always ready to intervene, they accompanied the pack in order to protect them against every breakdown and were capable of repairing any problem which arose with the bikes within a few minutes. 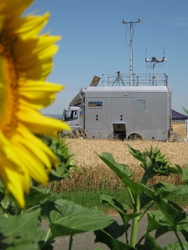 Laid out along the route, the intermediate points, of which there were  up to three, received signals and retransmited them to the finishing line, by satellite or by microwave relay. Inside the HFi4, Bruno Bardini coordinated the last essential relay point in the operation, which covers the last two hours of races on each day of the 21 stages of the Tour de France. 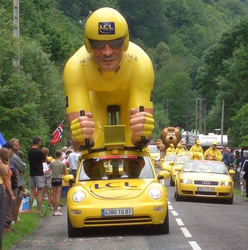 The final stage was won by Cavendish, who became the first winner of consecutive Champs-Élysées stages. The Manx sprinter won five stages in the 2010 Tour, more than any other rider, taking his career tally to 15 stage wins.

Tour winner Contador finished safely in the peloton surrounded by his Astana teammates. The win was his third Tour de France in three consecutive entries, after having won it in 2007 and 2009. Schleck finished in second place for the second year in a row and Menchov completed the podium in third place. Schleck also won his third consecutive White jersey as the tour's best young rider - it will be his last, as he turns 26 in the weeks before the 2011 Tour. Petacchi won the Green jersey for the tour's best sprinter. His second-place finish in the final stage gave him enough points to finish above Cavendish and Hushovd. France's Charteau won the Polka dot jersey for best climber. 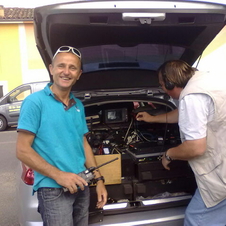 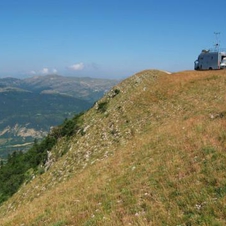 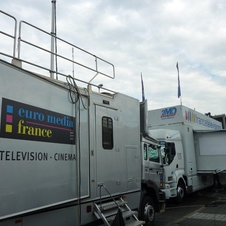 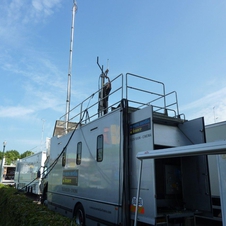 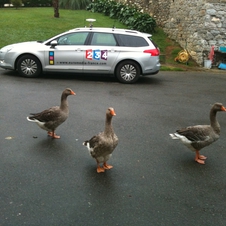