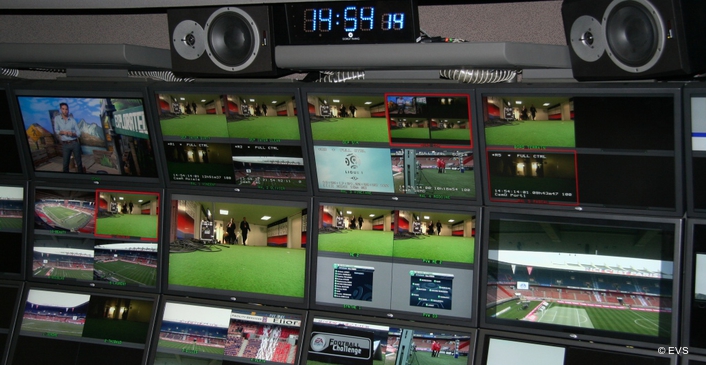 Ligue 1 Production by HBS
Host Broadcast Services (HBS), a wholly-owned subsidiary of sports marketing agency Infront Sports & Media, is a dedicated host broadcast organization that was initially created in 1999 with the core mandate of producing the coverage of the 2002 World Cup™. Ten years later, HBS has successfully established itself as one of the two industry leaders in the specialized field of host broadcasting and has been appointed by FIFA to be the host broadcaster for the 2010 FIFA World Cup™ in South Africa as well as the 2014 FIFA World Cup™ in Brazil.

HBS’ longlasting success is due not only to its ability to deliver world-class coverage cost-effectively, but also to its ability to design and implement broadcast innovations at each flagship event. At the 2002 FIFA World Cup™ in Korea/Japan, HBS produced 1000 hours of fully digital coverage with EVS Instant Tapeless Technology and launched a novel multi-feed concept for broadcasters. At the 2006 FIFA World Cup™ in Germany, HBS took the decision to shift to full HD coverage and introduced its Media Server Service and Clip Compilation Channel – for the very first time - which allowed licensees to access, deliver, and share broadcast quality material at will.
Over the last decade, HBS has expanded into other sectors, all the while delivering world acclaimed services and facilities to FIFA, thus ensuring “continuity” of service to its key customer, FIFA and to the world broadcasters. HBS has also put emphasis on delivering “technological progress”, namely to audit an ever-changing broadcast environment and to increase its expertise by working in close collaboration with the key broadcast manufacturers.
In 2008, HBS was contracted for a 4-year period by the Ligue de Football Professionnel (LFP) to deliver the host broadcast of the French Ligue 1®, the first division of French Football. Consequently, HBS has formed a team of specialists - HBS France Production - to carry out all of the production services and refinements needed for the successful delivery of 342 matches per season (38 are produced by Canal+), including new media production for the Internet and mobile phones. 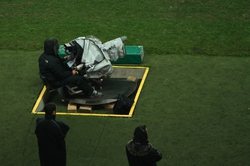 Although the production of football matches is HBS’ core business, the weekly production of the proprietary unilateral feed for French broadcasters, the multilateral world feed for international rights-holders, and a specific feed for mobile phone handsets represented a new challenge for the organization. It implied that HBS had to design and implement in just four months the production of 9 matches per week with optimal image quality, including 2 premium matches in HD, over a period of 38 weeks. With approximately 3 hours of coverage per match, this amounts to 1026 hours of live football per season. In addition to live coverage, HBS was from the beginning looking to develop new services tailored to the needs of the Ligue de Football Professional and to its standard customers – namely broadcasters, domestic as well as international - but also for LFP staff and club members. 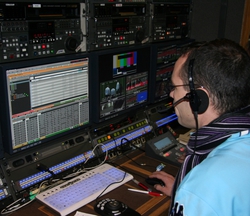 A compilation of clips containing the 10 best plays, interviews, contentious incidents and slow-motion replays, which is made available to rights-holders approximately 1 hour after the match via a specific international signal, is one of these new services. The ability to archive in Hi-Resolution (Hi-Res) - and in a compliant NLE format - all Ligue 1® matches, whether they are in HD or SD, along with interviews, match highlights and slow-motion replays - accessible to rights-holders at any time - is another. And for its second season at work, HBS has addressed the challenge of implementing a web-based solution that provides clubs, referees, and commissioners of the LFP access to all of the live matches and highlights from three separate camera angles. In addition, press conferences for media content and game analysis are also on offer.
This web-based solution has to be user-friendly to address the profile of a variety of end-users, offering fast and efficient search and review functionalities. 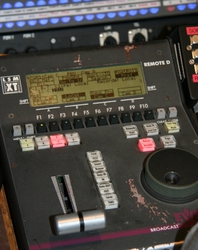 As a designer and manufacturer of hardware and software technologies, and as an expert in live sports production, EVS offers a cluster of integrated solutions that comply with the needs and technical requirements of HBS France Production and of the Ligue de Football Professionel. These comply in terms of reliability, speed, instant access, and media interchange.
HBS has appointed four outside broadcast (OB) facility companies for the live production of Ligue 1® matches. Two premium matches are recorded natively as Avid DNxHD® codec files with 18 cameras, and seven matches are recorded natively as IMX codec files with 10 cameras. HBS also enables mobile phone users to follow selected matches on their handsets in real time thanks to an additional camera entirely dedicated to a mobile international signal (MIS). XT[2]-LSM systems from EVS are employed for the recording of multiple camera feeds, the control of slow-motion and super-motion replays, as well as the creation of highlights packages.

In order to provide valuable content to rights-holders HBS has developed a searchable clip database with EVS technology. The concept of this searchable clip database, which features match highlights, interviews, and slow-motion replays, originated from the Clip Compilation Channel that was launched during the 2006 FIFA World Cup™ in Germany.
The database is generated during each match by a team of specially-trained loggers who tag the clean feed with relevant keywords and subsequently create a playlist containing the 10 best plays, interviews, contentious incidents, and slowmotion replays. The logging operations are conducted in the OB units and managed using IPDirector software, an integrated content production management tool created by EVS.
The keywords are pre-defined by HBS and the LFP, and are encoded into the software. Once an action is tagged with akeyword, it is available throughout EVS’ SDTI network, so that clips created by LSM operators are automatically indexed. The playlist is made available to rights-holders approximately 1 hour after the match via a specific international signal.

All of the Ligue 1 matches, associated highlights and metadata are stored on XF[2] 1TB removable hard disk drives.As a result, media content is stored in an industry standard MXF file format and can be imported directly to NLE stationswith no additional server required (via simple USB connectors). This service means that HBS spends less time searching and transferring media, and can swiftly reload clips, a vast improvement to the die-hard tape-based system. 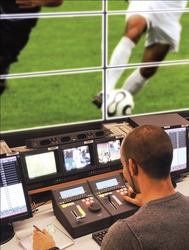 The newly implemented web-based solution was developed with EVS’ XT[2]Web platform, which combines broadcasttechnology with a web-server system. All live matches, highlights, and press conferences produced by HBS aremade available via a secure website where they can be viewed by the Clubs, the Referees, and the Commissionsof the LFP.
Access to the media files is made possible by the integration of EVS’ on-the-fly transcoding system, XTAccess. This transcoding system manages the encoding of Avid DNxHD® and IMX codec files into standard web H.264/MPEG-4 format files. This gives users the possibility to browse and download clips in Low-Resolution (Lo-Res) for further editing. And thanks to the import of descriptive metadata created during the ingest of the media files, users can easily browse through the content using keywords, dates, time code, and other descriptive information.
In addition, the XT[2]Web provides access to the international signal, as well as to the main and tactical camera feeds, which means users can choose to view and download clips from a preferred angle. Consequently, commissions and referees can very easily review contentious incidents for quick decision-making, clubs can download media content for their Web TV, and coaches can use specific footage for game analysis and developing upcoming game strategy. 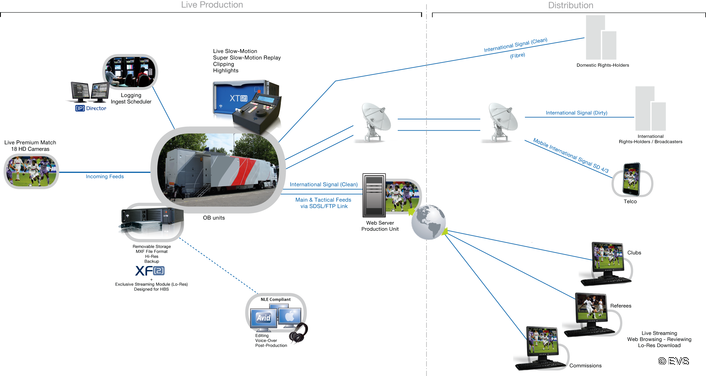 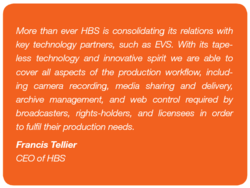 The successful collaboration between HBS and EVS during flagship events and FIFA World Cup™ projects over the last ten years has fostered a relation of trust. The two companies readily exchange know-how and combine technical skills to develop means of implementing customized services and of increasing the value of content. Among the key factors that have made the Ligue 1® tapeless production project a success are:
• EVS’ ability to understand and meet the demanding requirements of HBS in terms of reliability, speed, and interaction throughout the entire production workflow
• The confidence that a great number of engineers and highly skilled operators have in EVS Instant Tapeless Technology
• The extensive collaboration between HBS, OB facilities, and EVS to implement new products and services
• The extensive collaboration between HBS, OB facilities, and EVS to expand production capabilities in mobile units
• The open architecture and integration of EVS technology allowing HBS to benefit from a fully integrated tapeless workflow that guarantees maximum efficiency and a high level of productivity
• The unique level of support, technical services and training that EVS provides from the engineering design phase to the operational phase, working hand in hand to guarantee technical feasibility and cost-effective reliability at all times. 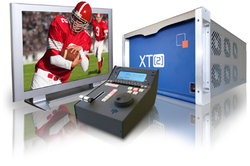 HBS has also delivered, on behalf of the LFP, an experimental Live 3D broadcast of a football match between the Olympique Lyonnais and Paris Saint-Germain FC, played in Lyon in April 2009. This was the first-ever live European broadcast of a football match in 3D. The ingest of files and slow-motion replays were done with 2 HD XT[2] production servers and MulticamLSM software made available by EVS.