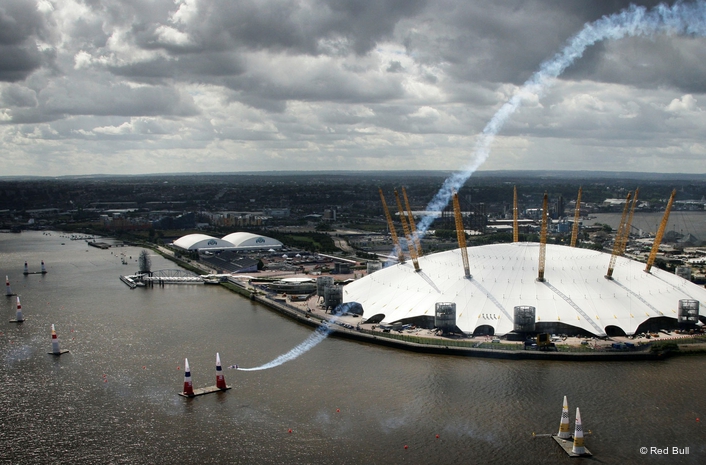 Red Bull Air Race in London 2007
After over a year of preparation the London Air Race took off on 28th and 29th July. The course is framed by the Thames Barrier, the skyscrapers of Canary Wharf and the Greenwich Peninsula which is dominated by London’s newest entertainment destination, The O2.

11.000 seats have been erected on the grounds of the Peruvian Wharf, which was leveled espacially for the Air Race in order to offer the spectators an impressive view of the pilot’s flight manoeuvres. Another 20.000 seats were available at the newly reopened, renovated, state-of-the-art O2 Arena next to the river Thames, which will also be the location of the gymnastics and basketball competions for the Olympic Games in 2012. 500 meters of runway and 7 hangars for the 13 airplanes have been temporarily set up on unused grounds north of the City Airport and 40 cameras have been brought into position to zoom in on the Air Race spectacle and to broadcast the competition live to 93 countries. 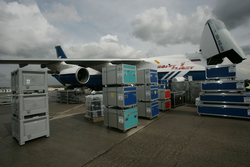 Fifty tons of television equipment with a value of twelve million Euros accompany the Air Race around the world (Abu Dhabi, Rio de janeiro, Monument Valley, Istanbul, Interlaken, London, Budapest, Porto, San Diego, Perth). Fourteen cameramen, two dozens on-board cameras and an equally large staff of directors and editors produce the High Definition TV images of the race for the viewers arround the world. The spectators on the ground can also watch the event live on large screen video walls. SIVision is responsible for the production of both signals.

SuperSloMo pictures are recorded on the EVS LSM XT2

The HDTV broadcast signal is generated in the production area located in a big tent on the TV compound, while the signal for the large screens (Diamond Vision provided Mitsubishi displays) is edited on the first floor of the control tower. For both purposes SIVision is using the MVS-8000 High Definition mixer from Sony. The router for the inbound and outbound signals is a Leitch Platinum with a 256x256 matrix. Here the system also receives the signals from the 6x HDC-1500 cameras and the 4x LDK-6000 wireless cameras with full HD GigaWave system which are positioned at the race track and at the temporary runway (TRW) as well as from the HDC-3300 SuperSloMo camera. The SuperSloMo pictures are recorded on the EVS LSM XT2 disk recorders delivering stunning replays from the actions of the raceplanes between the pylons and showing any misconduct, such as departure from the track or any form of failure to execute the required flying elements. 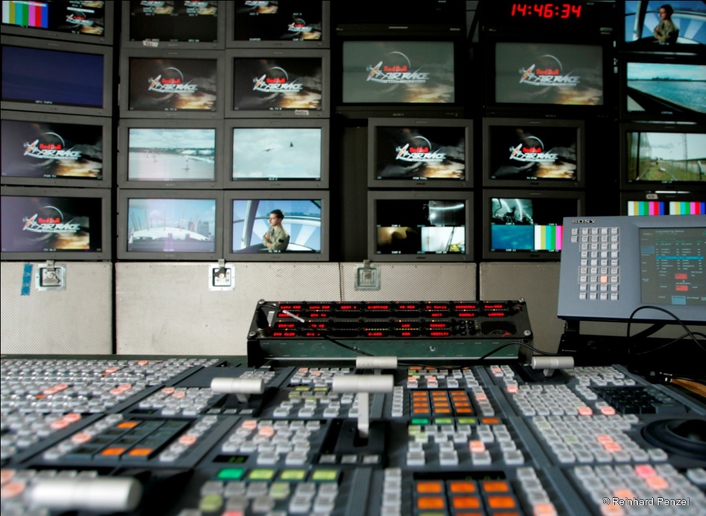 An accurate time keeping system from Abatec supports the TV pictures and is vital to enshure fair competition. The core of this system is a newly developed methode consisting of six laser sensors. Four of these devices are applied at the start/finish line. Two of those are responsible for checking the exact moment the race plane crosses the line. The other two measure the plane’s ground speed. Two other stations deliver split times to race control. The respective area is permanently scanned by radar beams. When a plane enters the area, it’s reflections are monitored by a receiver device, which transmits the signal directly to the timing system. Through the accuracy of this method, flying time could easily be measured in thousandths of a second. Like in other sports, the organizers stick to hundredths. To be on the safe side, three individual real time back-up systems are used. All generated data is put in relation to everything that is transmitted via the plane’s onboard monitoring system. This contains data such as flying altitude, ground speed and G-force. The exact position of every plane is monitored via a prototype DGPS system which was developed exclusively for the Red Bull Air Race by Abatec. Even though planes race at over 400kph in a three-dimensional environment, their position can be tracked with an accuracy of less than a foot in real time. All this data is processed into a special set of TV graphics. G-force, split sector times and top speeds are included in the international live television feed as well as 3D models in High Definition. 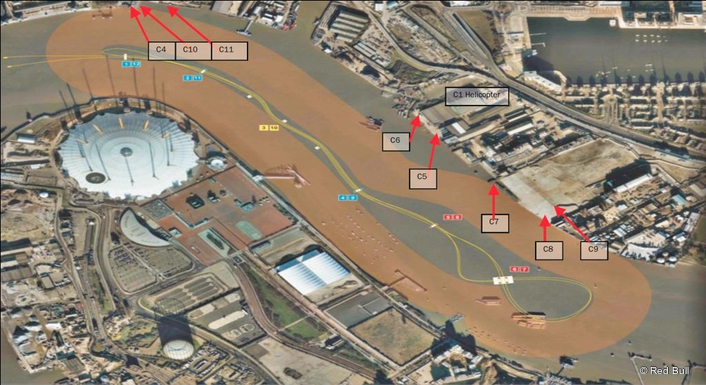 In addition a dark-blue BO-105 CBS4 helicopter from SkyMedia in Switzerland targets the pilots during the competition with a High Definition camera HDC-950 from Sony and a Canon HJ40x lens – both mounted in the CineflexHiDEF turret with full digital servo and control system and a 5 axes gyro-stabalizer. Via the control unit the on-board cameraman delivers breathtaking pictures from a dizzying height via radio link down to the TV production compound. “We developed the CineflexHiDEF camera system ourselves. It transmits images live in three dimensions”, explains the pilot Jürg Fleischmann. These pictures combined with the views of the on-board pictures from the two SD mini cameras in each raceplane shows the audience on the TV sets that it is a matter of split seconds between success and disaster when the competitors attempt to squeeze their aircraft between the gates at such high speeds. 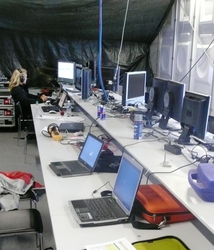 With the SimulCam software from Dartfish it is possible to combine the videocapture of the flights of two raceplanes between the pylons into one video signal, allowing the viewers to compare and contrast the raceplanes’ position, style and trajectory. Based on selected criteria, SimulCam uses temporal and spatial alignment technique – in simple terms, this means that a number of varied aequences, over time and space, viewers can observe and compare one raceplane’s movement with another’s. The technique involves the selection of corresponding frames that calculate video coordinates using advanced image processing algorithms to combine and blend the content. The result presents a video clip that seemingly shows both competitors together at the same time.

After London the race was heading to Budapest followed by Porto, San Diego and Perth 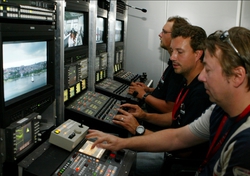 All these various video signals (the live ones from the cameras and the processed ones from the computers) are coming together in the production area on the TV compound where the directors and editors are producing the HDTV output signal. On the monitor wall (consisting of 27 Sony LMDs and Zandar splitters) up to 70 input signals are displayed. Within a fraction of a second the chief director has to decide which image from all this various input sources should be broadcasted next, resulting in an exciting and enticing live program of each Air Race. And the growing number of viewers arround the world are underlining that the producers of the Air Race have understood that today’s TV audiences want more fun and enjoyment while watching their favourite sport. After London the race was heading to Budapest followed by Porto, San Diego and Perth. And always an Antonov airplane is lifting the fifty tons of the High Definition Flyaway System to the next location. For the whole race period from April to November a big part of the flyaway system is provided by Presteigne for SIVision. 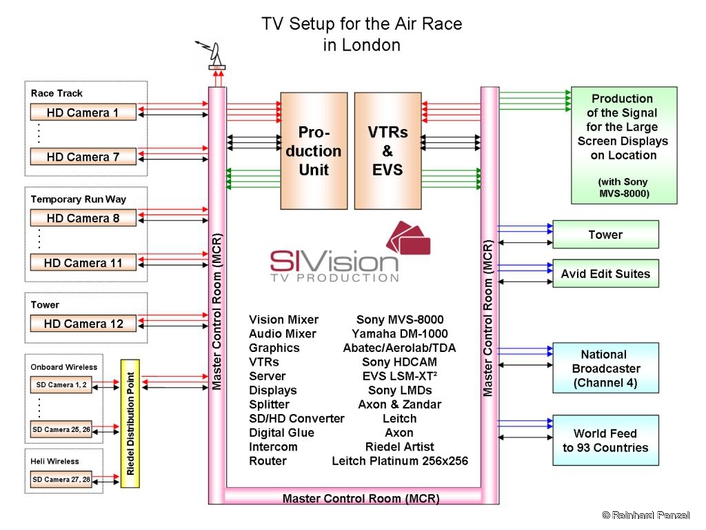 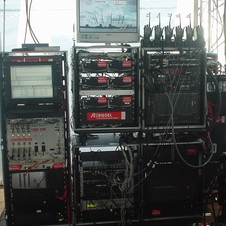 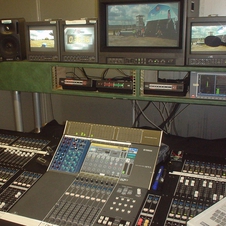 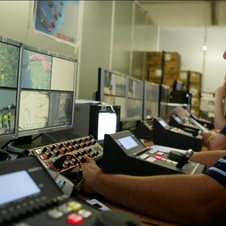 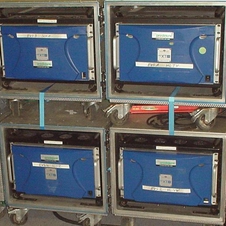 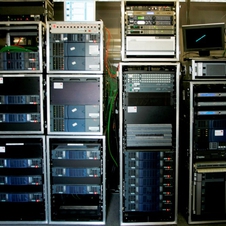 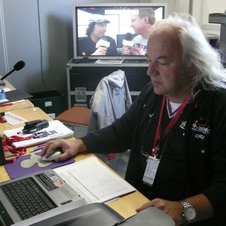 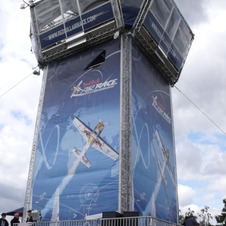 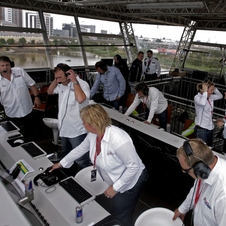 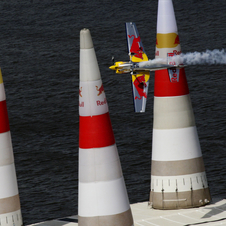 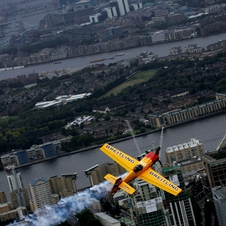 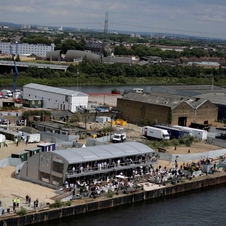 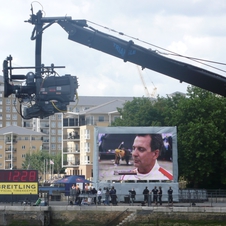 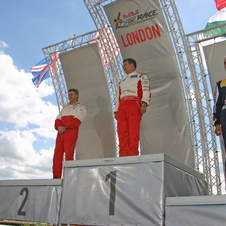 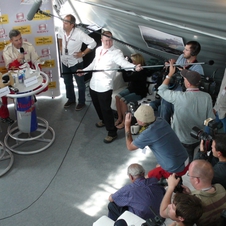