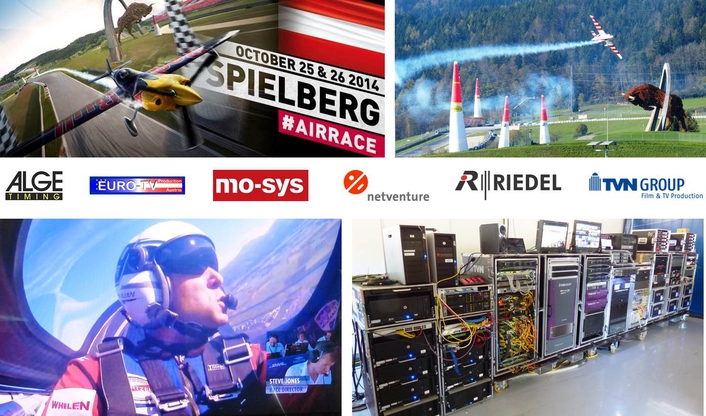 The Alpine racetrack is nestled in the region of Styria - the 'green heart' of Austria
After a three-year hiatus, the Red Bull Air Race World Championship came roaring back in 2014. The eight-stop 2014 Red Bull Air Race World Championship began in Abu Dhabi in March with subsequent stops in Rovinj, Croatia in April, Putrajaya, Malaysia in May, Gdynia, Poland in July, Ascot, United Kingdom in August, Dallas/Fort Worth, USA in September , and Las Vegas, Nevada, USA in October, before it arrived for the final in Spielberg, Austria, a sensational location for the sport. The Spielberg stop was the 58th overall Red Bull Air Race, a sport that has been staged in 18 countries since it was launched in 2003.

As 12 of the world’s best pilots reunited in February for the season opener in Abu Dhabi, new rules and mandatory standardization of engines and propellers leveled the playing field. This year, the competition would be tighter than ever and would make small pilot errors even more costly for the championship. It was exciting racing right through to the season final in Spielberg, Austria. 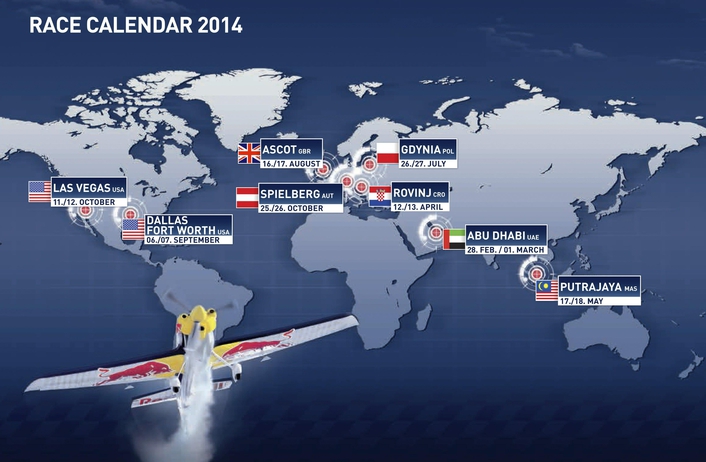 Red Bull Air Race was Coming Home for 2014 Season Final
With a world-class circuit that welcomed back Formula One to Austria in 2014, the renamed Red Bull Ring has seen an exciting variety of two and four-wheeled competitions in this 'highlight' season – as well as truck racing – and now racing with wings. 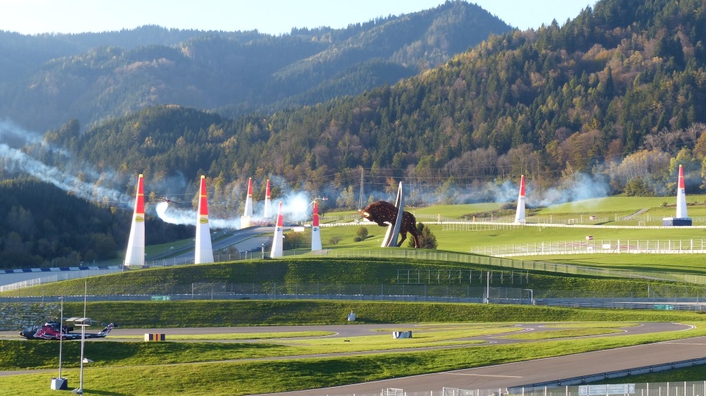 The Alpine racetrack is one of the most challenging ever

The Alpine racetrack is one of the most challenging ever. It is nestled in the region of Styria, which is known as the 'green heart' of Austria and this gives the race an added alpine dimension, with the lush countryside making a vibrant backdrop. The elevation change within the lap is about 65 meters, rising from the start/finish line toward the turning manoeuvre and the chicane. Making the track even more difficult are the trees on the course that have to be navigated as well.

The TV Production
Spectators around the world could watch the action at the eight venues live. TVN Mobile Production together with its partner EURO TV and with the support of Riedel was in charge of the production of the international TV signal. In addition to live webcasts the TV signal was distributed to outlets such as FOX in the USA and Australia; BSKYB in the UK, ADTV in the UAE, JSports in Japan, n-tv / RTL in Germany and ORF and ServusTV in Austria. 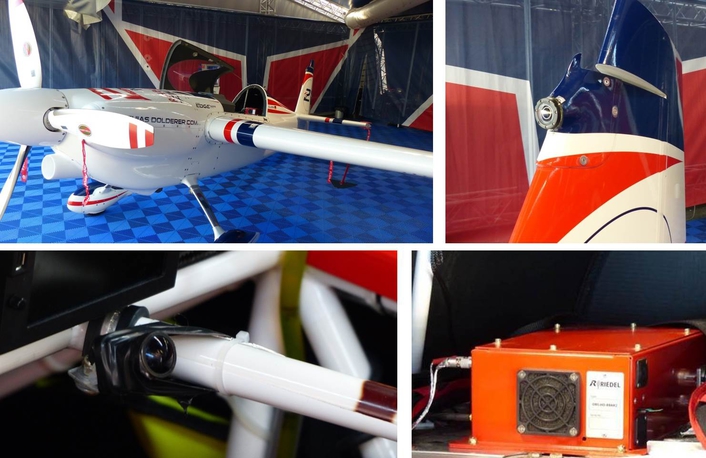 Each of the 12 race airplanes is equipped with two mini high definition cameras – one at the aircraft empennage and one in the pilot cabin – which are connected to a specially developed Riedel transmission box and antenna. During the competition the Riedel transmission box delivers the two camera signals live to a Riedel wireless receiving system on the ground. Each of the 12 pilots and its way through the pylons is continuously filmed. Via a dedicated remote control the Riedel production team on the ground controls all 24 cameras. Actually the Riedel team controls always the camera signals of three race airplanes: one that actually is performing on the race track, one that just has finished its performance on the race track and is back on its way to the landing runway and one that just left the starting runway and is preparing for its performance on the race track. Out of these six camera signals four are offered to the production director. 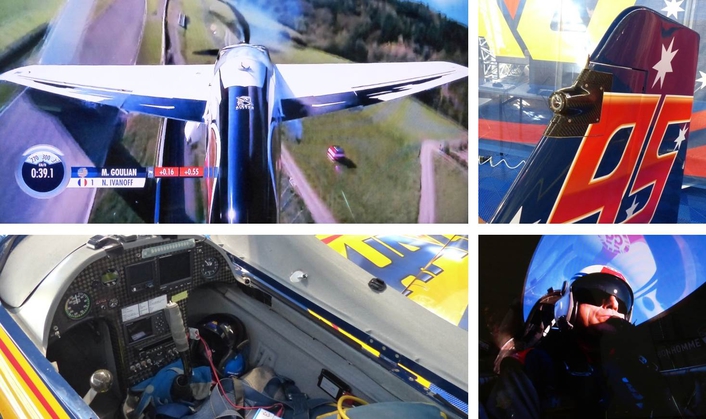 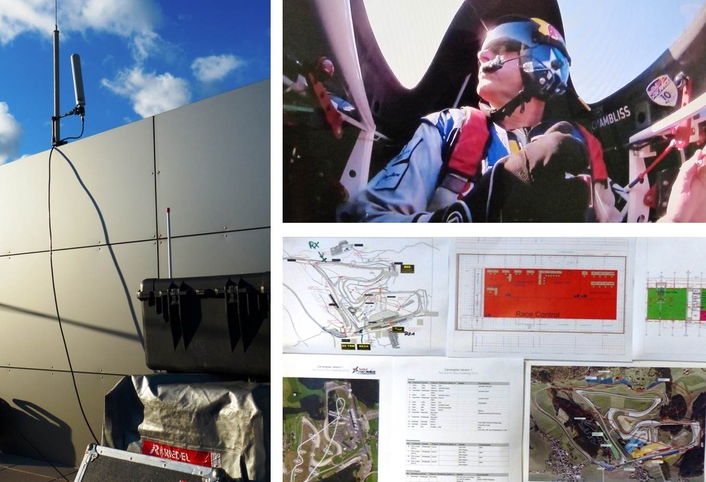 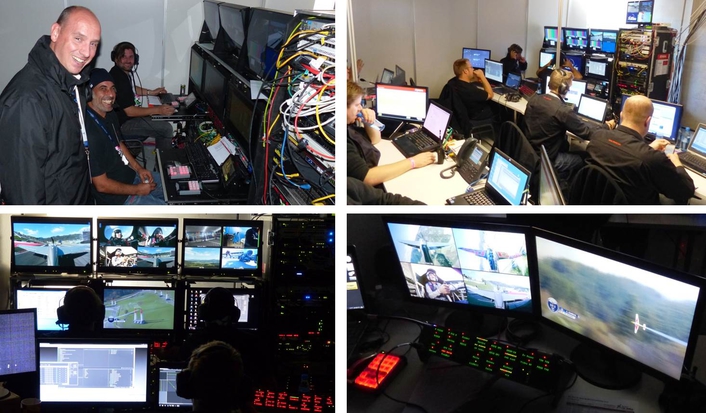 In addition to the four signals from the airplanes the production director Volker Weiker and his experienced vision mixer Delia Dittrich could choose from 20 more camera signals from around the track in Spielberg including a camera mounted in a Cineflex on a helicopter. The cameras on the track were connected via a 10km fiber ring with the TVN production center based on a 13-frame Riedel MediorNet. All the equipment is housed in 38 flight cases which were on location at all the other seven Red Bull Air Races. The main equipment includes a Sony MVS-7000X vision mixer, Sony LMD monitors with Miranda multi-viewers, a NVision video matrix, a VSM controller from L-S-B, digital glue from Lynx and Miranda and four Vizrt character generators. The system also includes 16x HDC-1500 and 2x HDC-3300 cameras from Sony as well as a Hi-Motion MKII camera from Ikegami with HDX fiber adapters from Telecast and DigiSuper lenses from Canon. Recording devices are from Sony (XDCAM), Blackmagic (HyperDeck Studio) and EVS (6x XT3). 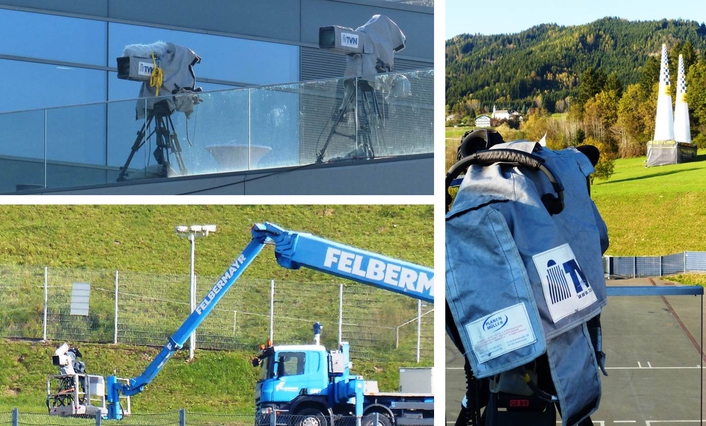 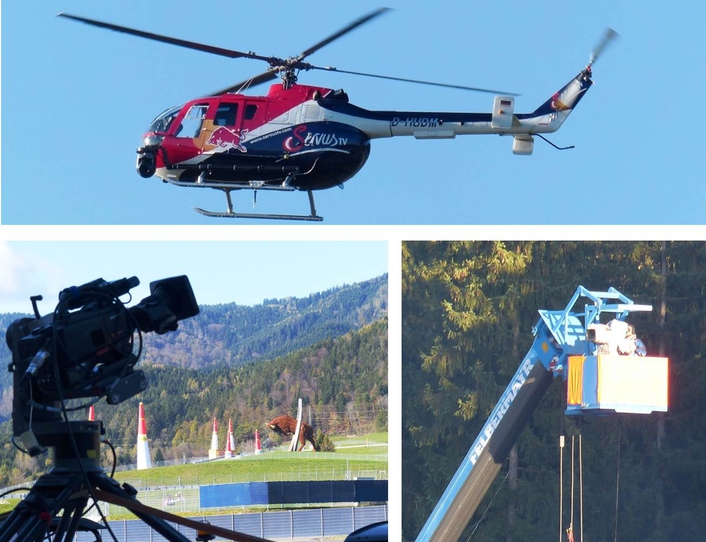 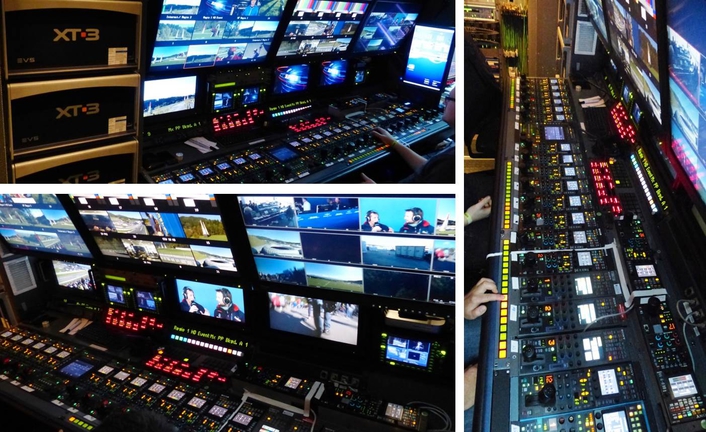 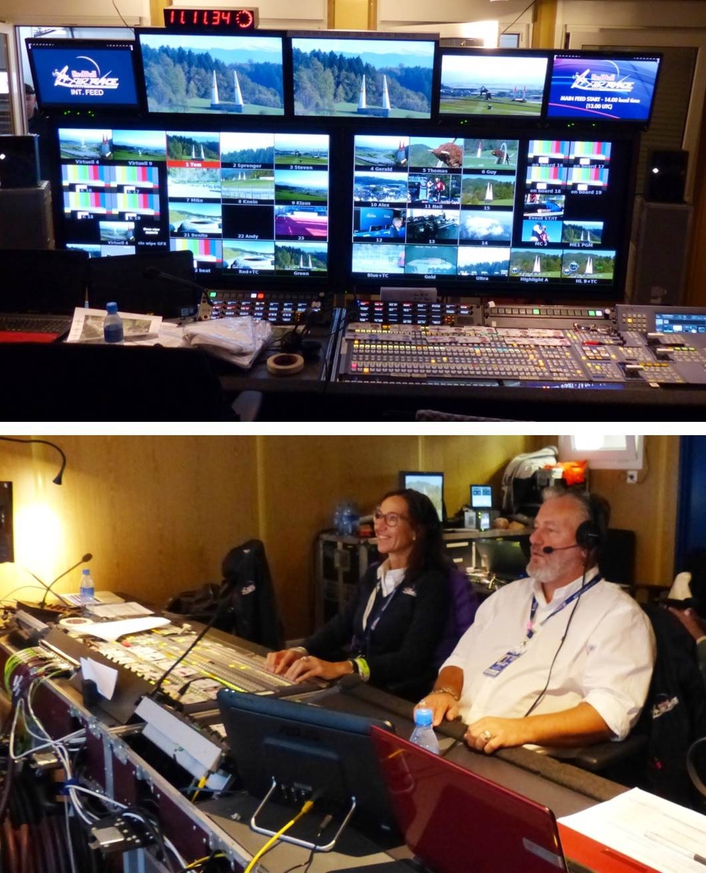 Delia Dittrich and Volker Weiker at the MVS-7000X vision mixer 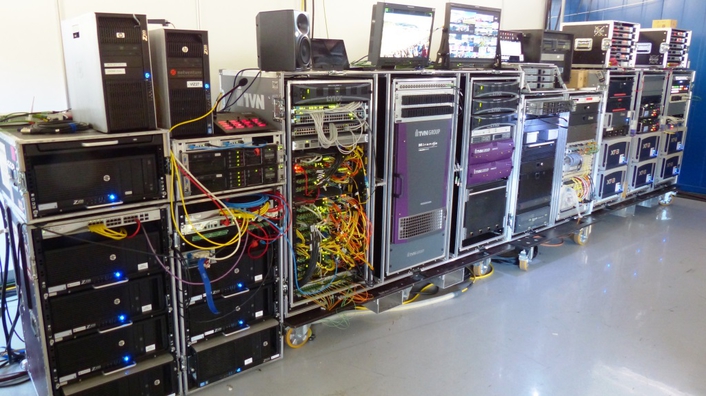 Live sound was mixed by sound engineers Ellen Heinze and Marc Dahmen on a Lawo mc²56 with a Lawo Nova routing matrix by following each race airplane through the course. Monitoring was done with Neumann loudspeakers, main microphones were the MKH series from Sennheiser. 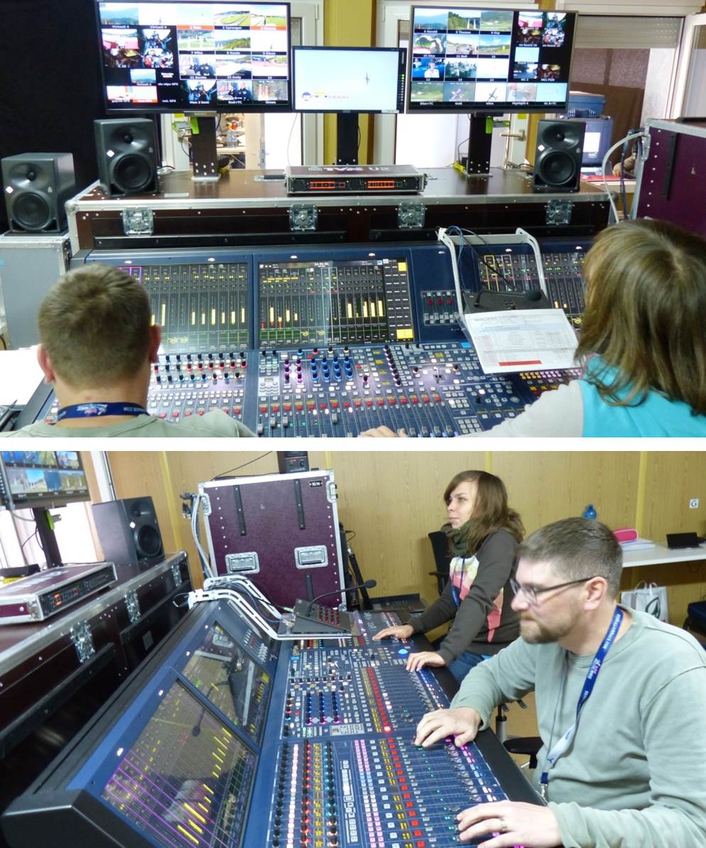 All camera signals were recorded on the EVS XT3’s and were available on demand of the production director for replay with Audio follow Video. 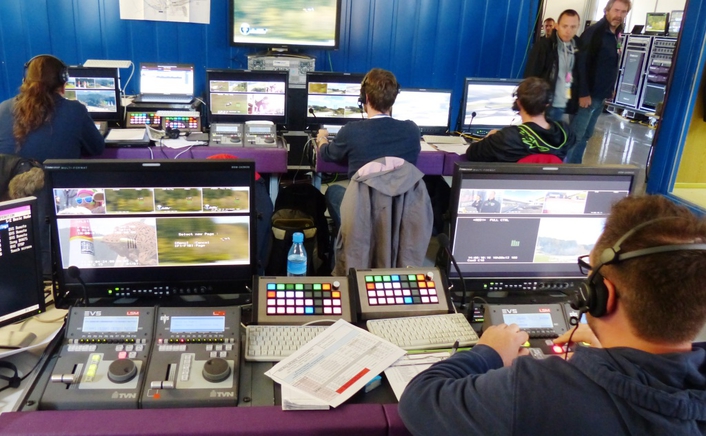 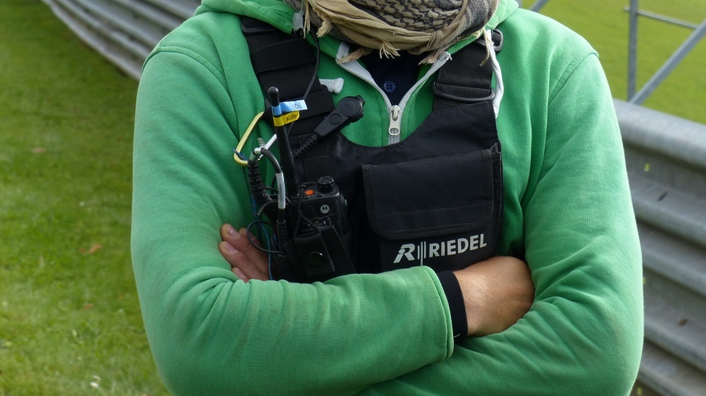 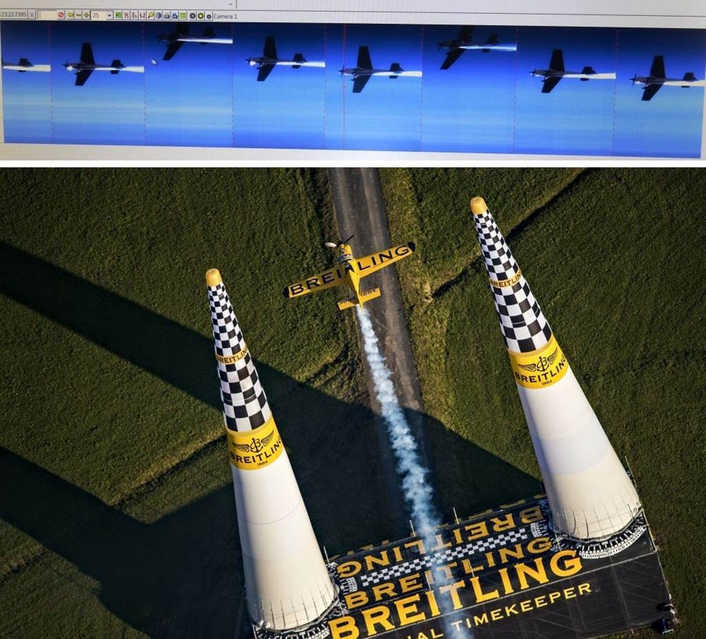 Photo-finish system with a resolution of 1/10,000th of a second

The clock starts and stops when the nose of the plane triggers the system as it flies through the starting and then the finishing gates. There is also a backup system – a line scan camera and transponder will also track the timings. The raw timing data is gathered by the team of ALGE Timing and send to the Netventure graphics team. Netventure is feeding the raw timing data into the timing templates on their Vizrt Engine graphic machines which then send a TV signal with all the information for keying to an input on the vision mixer.

Exploring the Limits
Hidden inside an unassuming 220g cylindrical box, lives a state-of-the-art system comprised of electromechanical sensors and software. It is a technical ensemble that is able to estimate, process, send and record data produced by the race plane whilst moving through the three-dimensional racetrack.

The telemetry system contains a main unit called EFIS (Electronic Flight Instrument System), which is a standard navigation system for aviation, but heavily customised for working in very high dynamics. It also includes external sensors to enhance the estimating and tracking capabilities, telemetry antenna, a GPS antenna, a connection with engine monitoring as well as a Peripheral Vision Indicator (PVI) for speed and an aural G-indicator. 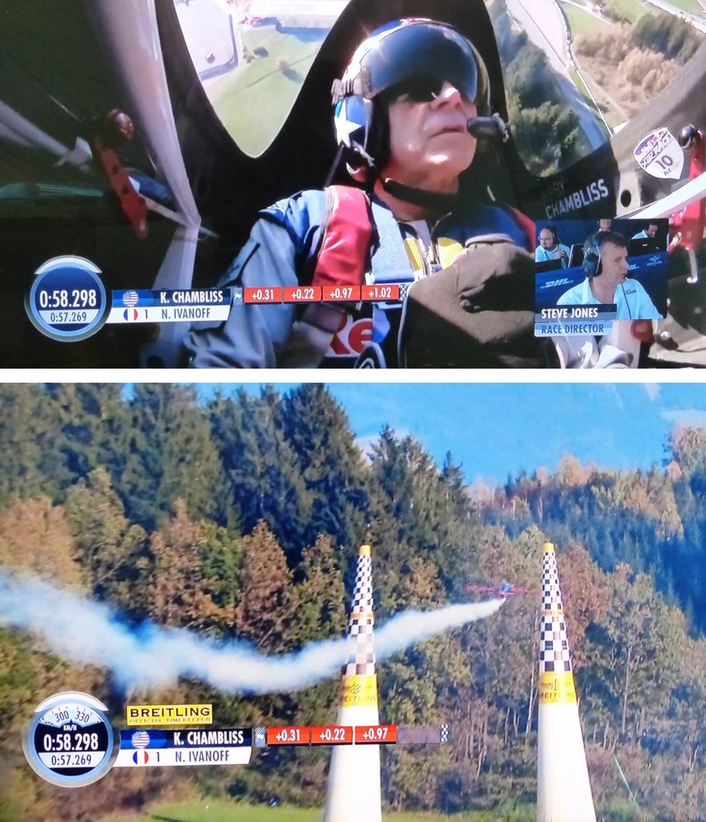 Red Bull Air Race Pushing the Boundaries with Augmented Reality
Red Bull is pushing visual boundaries and spicing up the Air Race with added inserted Graphics. The added graphics are to become part of the background and therefore it is required to precisely know the position and direction of the real camera. Measuring this in real-time is called camera tracking.

This was up to now impossible in the challenging circumstances in such races like Air Race or Formula 1. Mainly because the long ranging movements of the racing objects require extremely long lenses in order to get close for the excitement and also the camera positions are often high up on up to 50 meter tall Cherry Pickers.

What makes it difficult are the extreme long lenses. Lenses like the Canon DigiSuper 100XS are required with a viewing angle of just 0.5 degree when zoomed in. This means for HD or even 4k the tracking data must be resolved to nearly a 10,000th of a degree. This as such is not too difficult but when on an unstable platform of a Cherry Picker 50 meters up in the air with no mechanical reference points this becomes a challenge. Optical tracking systems were tested and they worked on shorter range but failed at the narrow end of the zoom lens.

Finally the production company Netventure and the tracking specialist Mo-Sys got together and provided Red Bull with a solution. Mo-Sys developed a solution based on its experience with gyro stabilisation. High spec gyro sensors in combination with technology that removes any drift is mounted to the box lens and providing accurate motion data of the tiniest motion of the lens to the required precision and even when swaying 50 meters up in the air. The proof of concept was done at the Air Race in Spielberg, further tests are scheduled during the Winter break and it is anticipated to have Mo-Sys gyro-tracked cameras for the next Air Race season feeding into Vizrt graphics engines and moving graphics designed by Promotheus.

Lamb Beats Arch in Dramatic World Championship Finale
Britain's Nigel Lamb won the 2014 Red Bull Air Race World Championship on Sunday with a dramatic victory under pressure at the season finale in Spielberg, Austria, with a heart-stopping second place finish after Austria's Hannes Arch ended up a disappointing fourth place in a nail-biting final in front of a sell-out crowd of 35,000 spectators. 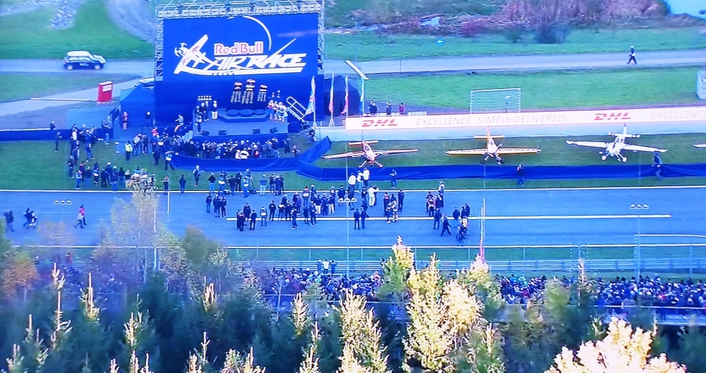 France's Nicolas Ivanoff won the race in the Austrian Alps on a sunny afternoon for his second victory this season but the 9 points that Lamb won was enough stave off a powerful challenge from local hero Arch and keep the British pilot in first place with a grand total of 62 points from the eight-race world championship, which was the most exciting in the high-speed, low-altitude sport's history. Arch, who could have won the World Championship with a victory in the final, ended up nine points behind Lamb and second overall for the third straight time in the world’s fastest motorsport series after being the runner-up to Paul Bonhomme of Britain in 2009 and 2010.

Cheered on by the boisterous sell-out crowd, Arch had been unstoppable all weekend on the Formula One track not far from his hometown of Trofaiach. Flying last in the Final Four, Arch knew that he could win the world championship if he could fly faster than Lamb and the other two rivals. But he struggled early on the undulating course with its challenging 65-meter change in elevation and, forced to take risks on the second lap in an all-or-nothing bid to win the title, got hit with a two-second penalty for flying through one of the Air Gates with his wings not exactly level that dropped him to fourth place. Without the penalty, Arch's time of 57.839 would have been good enough for second place behind Ivanoff's 57.468 but not enough to catch Lamb, who would have dropped to third in the race with his time of 58.052 but still have beaten Arch in the World Championship by a score of 60-57. 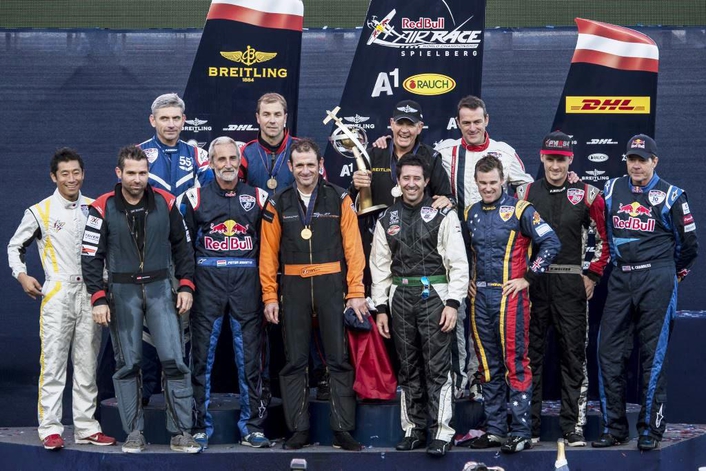