Polecam Applications at the Olympic Games 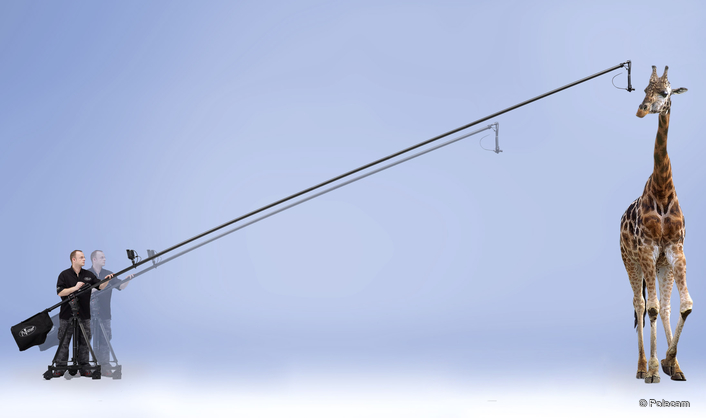 Polecam
Beijing was the third Summer Games for Polecam. Conceived during a windsurfing shoot off Hawaii in 1996, the Polecam go-anywhere transportable camera rig was developed from the combination of a carbon-fibre windsurfing mast and a miniature SD camera. Two Polecam systems were fully up and running by the time of the Sydney Games in 2000, increasing to six at the Athens Games in 2004 and to ten at the Beijing Games. 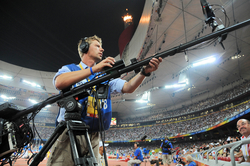 Antwerp-based Alfacam, one of Europe's largest and most active OB facility company, took its two Polecam HD rigs to the China Games. Bruno Coudyzer, manager of Alfacam's EuroLinx division explained his experiences: "We covered a number of sport disciplines and the opening and closing ceremonies. The Polecams proved particularly useful during the fencing, pistol-shooting and show-jumping. Both rigs were used with Iconix 1080i HD cameras. One was connected back to our production vehicle via an RF link and the other via cable. Everything worked well, not least the Polecam's splashproof cover. What we really appreciate about the Polecam rig is that it can be assembled quickly, used, relocated and dismantled, all by a single operator. Polecam's operational versatility is outstanding and enabled us to deliver very high-impact shots without getting in the way of the athletes or blocking the view from other cameras." (www.euro-linx.com) 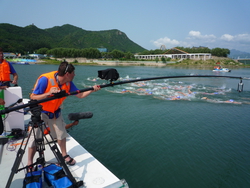 Swedish cameraman Tommie Rekstad was one of many Polecam operators active during the summer games, with electrifying results. Broadcast coverage of the athletics track and field competitions was handled by Finnish Television (YLE) with Swedish Television (SVT) covering the vertical and horizontal jump events. Part of Tommie's activity was with the YLE team, using a Polecam rig and an Iconix HD camera feeding an Alfacam mobile production truck to televise the long-jump events. His shots were mostly effects and crowd scenes, made using a wired system. "We also used a Polecam FishFace rig working in wild water, covering slalom canoeing and swimming. The ladies' swimming marathon lasted about two-and-a-half hours and the Polecam was on cue for about 50 minutes of that time. A thunderstorm added to the excitement during the canoeing as lightning struck one of the XLR cable connectors, taking out eight camera control units and my remote control panel. Fortunately everything proved repairable. Never leave a cable connected to an OB truck laying on the ground at thunderstorms! My thanks to Jim Daniels and the crew at Camera Corps who helped us out at very short notice." (tommie@trbild.se)

Camera Corps' own involvement in the China Games was on a massive scale. As well as its own huge inventory of equipment, the company took its own Polecam HD systems plus the two additional Polecam rigs dry-hired from Keith Harding. All three Polecams were equipped with an Iconix 3-CCD HD camera and the latest FishFace housing. The underwater rigs were used to cover swimming and diving, water polo and parts of the Triathlon. All worked well. (www.cameracorps.co.uk)

Another highly accomplished Polecam operator active at the China Games was Belgium-based Alexander de Backer. He was active with the Polecam at five locations, fitted with a 3-CCD 1080i Iconix camera linked to base by cable or more often via wireless link. "My first project was to cover the walking marathon. I was one of many other cameras covering the event so the directors had a lot of choice at their disposal. I got some very good shots and was very happy with what Polecam could achieve, especially the quality of the HD. The next location was at the finishing line of the 250 km cycling race to the Great Wall. This was followed by cycle time trials which started and finished at the Great Wall. "Third was the Triathlon. I covered the first 20 minutes of this, fielding the Polecam out from the deck of a catamaran. There were choppers around with Wescam systems but I found myself pretty much the main camera, working with a Polecam FishFace which meant I could lower the camera down to the water's edge. This being a lake rather than a swimming pool, the water was not clear enough to contemplate pushing the head fully underwater even if I had wanted to. After this event, I carried the Polecam off the catamaran to an adjacent position for coverage of the cycling. I then moved to a third position for the medals ceremony, hanging over photographers and onlookers to get a wide shot. The Polecam rig and camera worked well, even through 14 hours of practically continuous rain“. (www.polecmhouse.be)

Martin Mueller of Polecam-Deluxe covered the German-rowing eight in build-up phase shortly before the team flew out to the China Games: "We used the full five extension poles and a Toshiba TU61/63 SD camera with an anamorphic lens to capture some unique pictures for ZDF. The sequences were obtained during training on a branch of the Rhine and showed how the rowing team worked. I demonstrated this with moves around the boat such as from the bow close to the water to a top-shot. Polecam is ideal for this type of work as its own motion has no significant effect on the balance of the vessel you are shooting from. We also recorded female rowing on an Alpine lake close to St Anton as well as canoeing on the Mueritz, Germany's second-largest lake." (www.polecam-deluxe.de) 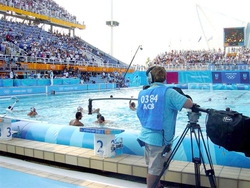 Keith Harding of video production and equipment-rental company TX-2 is one of Britain's most successful Polecam operators with two HD rigs which he 'dry'-hired to Camera Corps for their coverage of aquatic events, "Both our rigs are equipped with 1080i Iconix cameras and full body armour, including the new FishFace underwater head. Our first Polecam was bought primarily to use on productions for our own clients but we were quite happy to hire both rigs to Camera Corps to help in their coverage of the China Games. The new underwater head has a 360 degree pan capability and the same fully unrestricted movement as a standard Polecam dry head. Electrical connection is made very easy by a split O-ring gland which can be used to seal cables without having to break existing connections. Pan/tilt control is via a fully sealed one-piece gearbox. Polecam is uniquely powerful for ground level up to high-angle overview shooting. FishFace adds enormously to that versatility and gives the impression that the camera operator is operating under water rather than controlling the camera from above." (www.specialitycameras.tv) 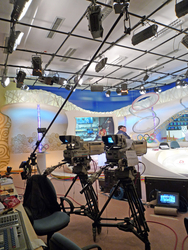 Christoph Ritter fielded his Polecam system, including a digitally interfaced 1080i Toshiba camera with 4 mm lens, at the China Games on behalf of ARD and ZDF German TV. The events covered were 'Waldi & Harry', a daily talkshow from Beijing for ARD, a daily infotainment production titled 'ZDF Olympia Highlights' and a Paralympics daily special for ARD and ZDF. Christoph is a long-time Polecam operator who was active at the 2008 UEFA European Football Championship just a few weeks earlier. His considerable level of experience can easily be determined from his website. (www.griphouse.com) Last but not least, Hong Kong broadcaster TVB used its Polecam in its Beijing studio for the duration of the China Games. The rig provided a fast and efficient way to supplement the output from traditional cameras looking towards the stage set at below head height.

And so to London

Four years is a long time in the television business. If the trends visible at Beijing are any guide, the British Games may well prove a testing ground for 2 megapixel 1080i 3D well on their way to 33 megapixel 3D Ultra-HD. 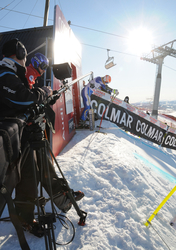 The Polecam offers the potential of a camera crane wherever it was previously impossible to use one, whether in the pit lane in Formula 1 (the Polecam is the only crane that has ever been permitted here) or the small studio. The strength of the Polecam lies in its compact design, which enables the camera man to transport the camera in his own car. Putting a camera crane in a boat was once something that was only possible for Hollywood productions – those times are past. The camera boom is supplied in the form of five universal carbon tubes one meter in length and four centimeters in diameter. Various 3-chip-minicameras from Camera Corps, Iconix, Ikegami or Toshiba with HD resolution offer component and composite outputs. The cameras are mounted on a remotely controlled pan/tilt head which permits both rapid and gentle movements. The camera picture is presented on a high-resolution TFT monitor which is mounted on the pole system. All cables between the pan/tilt head and the rear of the Polecam are guided through the poles. A small, high-quality microphone for atmos is also included in the delivery package. The system components are packed in two special bags, one for the camera head and accessories, the other for the poles, and these can be carried like a rucksack. The Polecam can be set up and taken down in around ten minutes. It can be operated from the back of a wide range of vehicles and even from the pillion of a motorbike. It can also be mounted on any stand, dolly system or remote head. The Polecam is ideal for countless applications, from sports events and concerts, to documentaries, TV plays and nature films, through to security monitoring. (This Article is based on a story from Steffan Hewitt, founder and Managing Director of Polecam Limited – www.polecam.com) 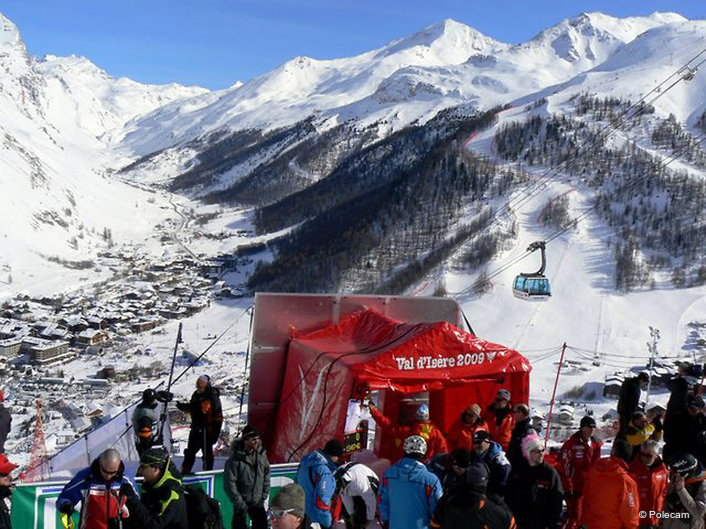 Polecam at the Downhill Race in St. Moritz