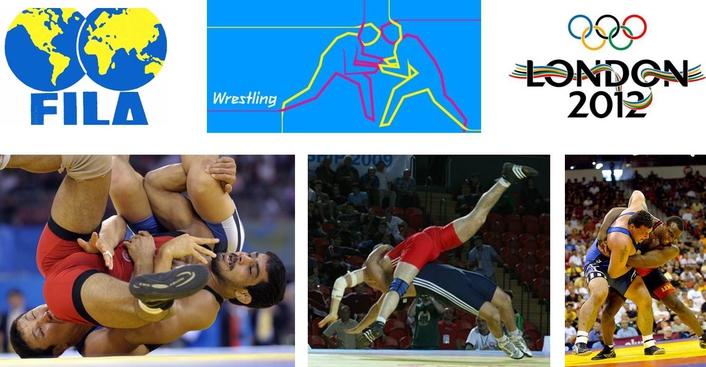 The London 2012 Olympic Competitions in Wrestling will take place at the ExCel Exhibition Centre
Recognised as one of the world’s oldest sports, Wrestling was first held at the ancient Olympics in 708 BC, and Greco-Roman Wrestling was included at the Athens 1896 Games, the first of the modern era. Played out on a circular mat, the sport is a battle of nerves, strength and skill, and should provide plenty of drama at ExCeL during London 2012.

The London 2012 Wrestling competition takes place at the ExCel and consists of two disciplines – Greco-Roman, where athletes use their upper bodies and arms only, and Freestyle, where athletes can use any part of their bodies.

History
Wrestling is the oldest form of sporting combat and has a mythology like no other sport.

For the ancient Greeks, wrestling was a very big deal. It virtually defined the original Olympic Games as the marquee event. Among the sport's noted practitioners was the philosopher Plato, who had the brawn and the brains to get out of a clinch; one of wrestling's early sportswriters was Homer, who recounted epic matches.

Wrestling also had the blessing of the gods of Greek mythology: Zeus out-wrestled Cronus for possession of the universe, a feat celebrated in the ancient Olympic Games by making wrestling the decisive, final event of the pentathlon.

Back then, the sport actually resembled what is now known as freestyle wrestling, but with naked competitors coated in olive oil grappling until one succeeded in throwing or knocking the other down.

But this was nothing new. Sumerian cave drawings found in Mesopotamia indicate that wrestling has been around more than 7,000 years. 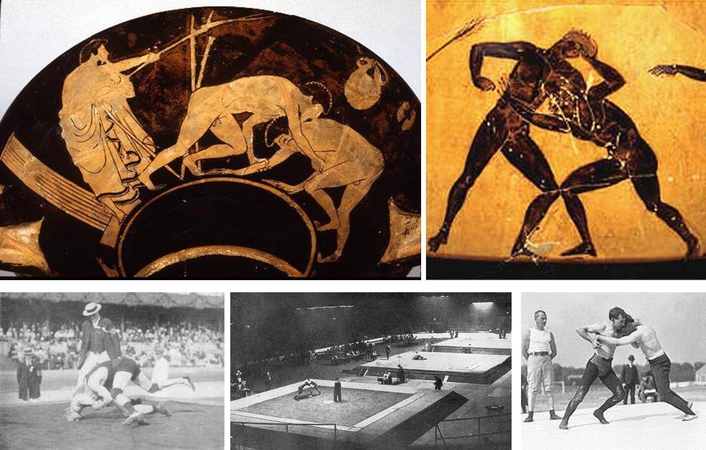 The Egyptians refined the activity into a science. Tombs around the village of Beni Hasan dating to 2500 BC contain hundreds of wrestling how-to drawings.

Greco-Roman Wrestling was included at the Athens 1896 Games. The 1904 Games in St. Louis saw the introduction of freestyle wrestling, a faster-paced discipline that permitted the use of the legs to attack and defend above and below the waist. Women’s Wrestling joined the Olympic programme at Athens in 2004.

The Basics
Wrestling is divided into two disciplines - freestyle and Greco-Roman - each with their own weight divisions.

Men compete in both disciplines, whereas women only take part in the freestyle events, in four gold medal categories. The men have seven in each. 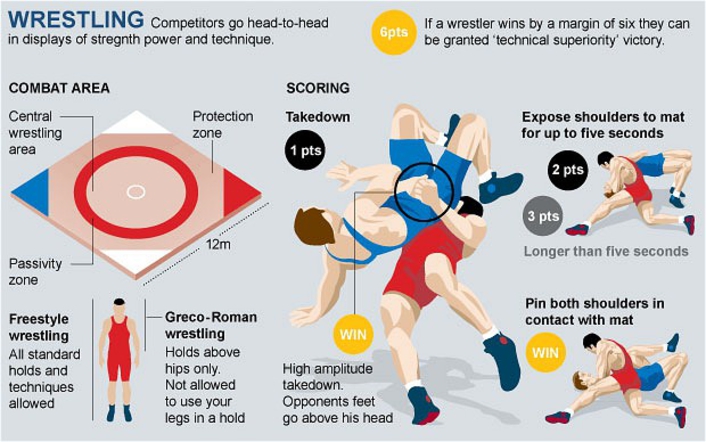 Wrestling is a body-to-body combat sport. Greco-Roman wrestlers use only their upper bodies and arms. Freestyle wrestlers can use any part of their body to pin or throw their opponent to the ground.The aim is to force the back of the opponent’s shoulders on to the ground. Bouts take place on a mat and can last for a maximum of three periods of two minutes, with a 30-second break in between periods. Periods are decided by points, awarded for various throws and holds. A period is won by technical superiority by performing a grand amplitude hold (worth five points), scoring two holds worth three points, or gaining a six-point lead.

The more spectacular the flip the more points it generally earns. Additional points are awarded if an opponent is fliped onto the back.

If at the end of the match neither wrestler has managed to pin the other, then the decision goes to points. If one wrestler earns a 10-point lead they automatically win. A contest can finish early if a wrestler wins the first two periods or pins his opponent.

The athlete who wins two periods wins the bout. A contest can finish early if a wrestler wins the first two periods or pins his/her opponent.

In Freestyle Wrestling, the third, deciding period may last longer than two minutes to determine the winner. In the event of a tie on points in the third period after two minutes, the bout enters a golden score period, when the first score wins.

The rules in women’s Wrestling are similar to those used in men’s Freestyle Wrestling, but with some key variations – for example, double head-locks are forbidden.

The Format
Wrestling bouts are fought on an octagonal mat measuring 12m x 12m. Inside the mat is a 9m diameter combat circle.

Wrestling, like gymnastics, weightlifting and powerlifting, features some of the most explosive and powerful athletes in the world. Every bout is a trial of strength, testing the very upper limits of cardiovascular conditioning and requiring stamina-sapping effort. The aim is to execute a take-down or throw move before the opponent does, so speed of thought must match speed of action.

Often a simple shift in body weight can help to use the opponent’s momentum as an advantage. Technique is as important as raw strength. Good execution of moves will help to effectively take down the opponent and score more points.

Athletes compete in weight categories. For all events, there is a direct elimination system that eventually decides the two finalists for the gold medal match. All wrestlers who lose against either finalist, at any stage of the competition up to and including the semi-finals, enter the repechage; the winners of the two repechage groups win bronze medals.

Each bout is controlled by a refereeing body, which consists of a referee, a judge and a mat chairman. The three officials work together to decide on fall or points, with agreement needed between at least two of them. Each wrestler or coach (with the agreement of his/her wrestler) can challenge the decision of the refereeing body through video evidence. The quality of the refereeing body’s decisions is monitored by the jury of appeal (three people), with one jury of appeal assigned to each mat.

An incredibly technical sport, wrestlers must stay within the rules or risk having valuable points awarded to the opposition. Points can be awarded for illegal actions, such as scratching, biting or pinching; for illegal holds (some holds may only be enacted with one hand, for instance, or from a particular direction); or for leaving the mat. 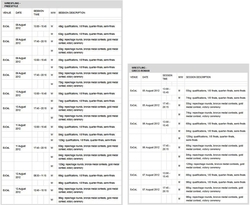 Each country is limited to one athlete in each event.