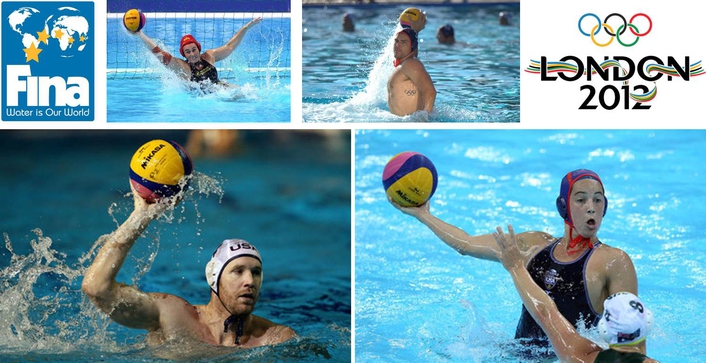 The London 2012 Olympic Competitions in Water Polo will take place at the Water Polo Arena at the Olympic Park
Water Polo developed during the 19th century as an aquatic version of rugby, played informally in rivers and lakes. The version of the game that survives today is closer to Handball: a fast, tough and demanding sport, it has featured on every Olympic programme since the Paris 1900 Games. Women’s Water Polo was introduced at the Sydney 2000 Olympic Games.

Played by teams of seven in a pool with a goal at each end, Water Polo is a thrilling spectacle. Distinguishable by its silver-coloured wrap and inflatable roof, the temporary Water Polo Arena is located in the south-east corner of the Olympic Park, alongside the Aquatics Centre. It is the first dedicated Water Polo venue to be built for an Olympic Games.

History
A tough, physical sport, water polo had a reputation for extreme violence in the 19th century. Originally, players rode on floating barrels and swung at the ball with mallet-like sticks, just like equestrian ‘polo’, from which it derives its name. The history of water polo as a team sport began in late 19th century in England and Scotland, where water sports were a feature of county fairs and festivals.

By the 1880s, the game evolved that stressed swimming, passing, and scoring by shooting into a goal net; players could only be tackled when holding the ball and could not be taken under water. To deal with constant changes in rules, in 1888, the London Water Polo League was founded and approved rules to allow team competition, forming the foundation of the present game.

The sport developed with different rules in the United States and Europe, but eventually the quicker and less violent European form prevailed and forms the basis of the version played at the Olympics. It is also the longest running team sport on the Olympic programme. 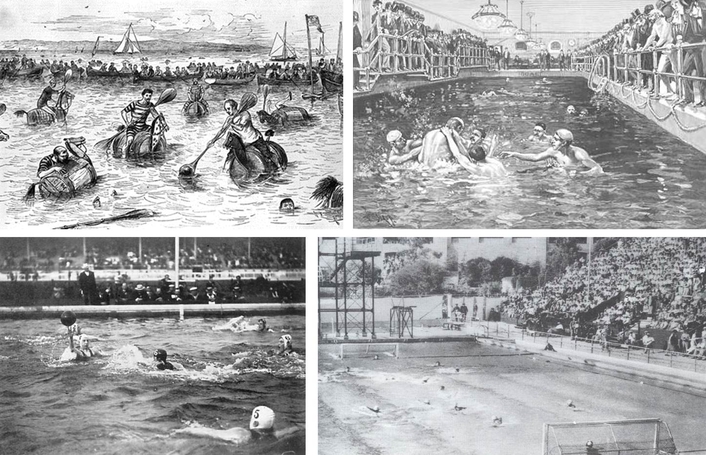 In 1928, Hungarian water polo coach Béla Komjádi invented the "air pass," or "dry pass", a technique in which a player directly passes the ball through the air to another player, who receives it without the ball hitting the water. Previously, players would let the ball drop in the water first and then reach out for it, but the dry pass made the offensive game more dynamic, and contributed to Hungarian dominance of water polo for 60 years

Hungary won medals at every Games from 1928 to 1980. It took the 1984 Los Angeles boycott to bring their successful run to an end. Even now, they continue to dominate the sport and have won gold at the last three Olympic Games.

The Basics
The Water Polo pitch at London 2012 is 20m wide and 30m long for the men’s event, and 25m long for the women’s event. It is 2m deep (there is no shallow end). The goals at either end are 3m wide and 90cm high. Water polo is played by teams of seven – a goalkeeper and six ‘outfield’ players – and a match consists of four eight-minute periods. Similar to handball, the aim is to score goals in the opponent’s net. 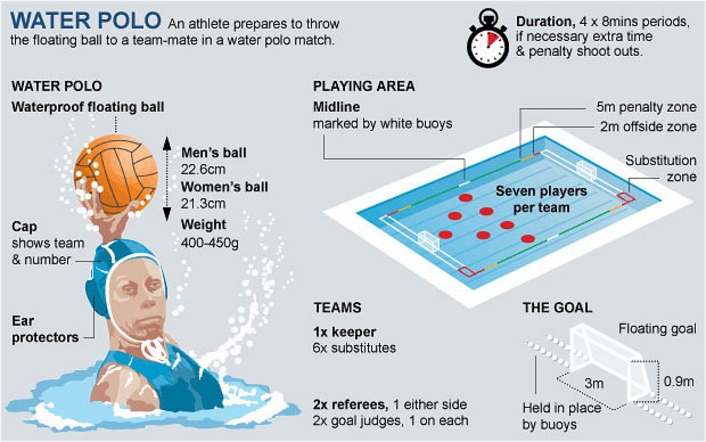 To maintain the speed of the game, each team has just 30 seconds to score before the ball passes to the opposition. Players require plenty of stamina as they are not allowed to touch the bottom or side of the pool during a match. Players may swim as much as three miles during a match. Only the goalkeeper is permitted to place both hands on the ball at the same time.

Fouls are divided into two categories: ordinary and major. A major foul results in a temporary exclusion, with the player being sent off the field of play for 20 seconds. A player who commits three major fouls in a game is sent off for the rest of the match. 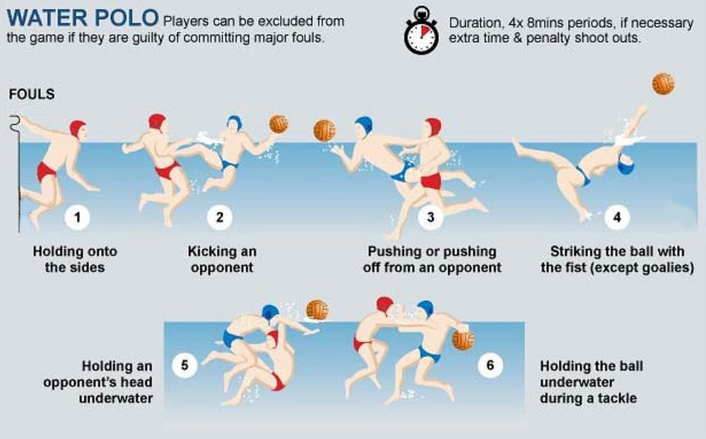 Each country picks a squad of 13 players. Eight countries compete in the women’s tournament and 12 in the men’s. In both cases, they are split into two groups who play in a round-robin format, with semi-finals and finals following.

Water Polo allows unlimited substitutions, although substitutes (as well as players who have been excluded for a short period for rule infringements) may enter the water only in a designated area in the corner of the pitch near each team bench.

The Format
The men’s and women’s competitions at London will both begin with group play. The teams are divided into two groups, and each team will play every other team in its group. In the preliminary rounds teams receive two points for a win, one for a draw and nothing for a loss. From here, the competitions progress through quarter-final and semi-final rounds before the top two teams go head to head for the gold.

Stamina is essential to success in water polo, as players are required to tread water throughout the match.

Most use a style know as the ‘egg-beater’, so called because of the circular movement of the legs. This allows them to keep at a level position above the water, using as little energy as possible. Excellent hand-eye co-ordination is also required, as teams need to be able to smoothly handle and pass the ball between them.

Players obviously need to be good at swimming, but the style used in water polo is quite different to traditional strokes. The arm stroke used in front crawl is shorter and quicker as players seek to protect the ball, and they will keep their heads out of the water at all times so that they can keep up with the game. Defending players may use backstroke but they will sit upright in the water rather than lying on their backs, so that they can switch positions quickly or catch a pass.

Two kinds of pass are typically used; the dry pass, where the ball does not touch the water, and the wet pass, normally to the attacking player nearest the goal (the ‘hole set’) so that he can lunge for the ball and make a shot at goal.

Another aspect of the game that players must be prepared for is underwater violence. “Under the water, anything goes....even biting,” remarked US player Layne Beaubien in 2004. Players often grab, fight and dunk one another and get away with it because the referees often can not see the illegal actions due to white water, which develops as players move about in the pool.

Like other contact sports such as boxing and taekwondo players have to be conditioned to cope with the physical aspects of the game. They also have to be very aware of what is going on around them or they may find themselves suddenly dunked at a crucial point.

There are two referees, one on each side of the pitch and two goal judges, one at each end. They are assisted by two timekeepers and two secretaries.

Certain infringements, which include holding, sinking and pulling back an opponent who is not in possession of the ball (called ‘exclusion fouls’), can see a player being made to leave the water for up to 20 seconds. This leaves the other team with an extra player, giving them a real advantage.

Number of medal events: One men’s and one women’s competition. 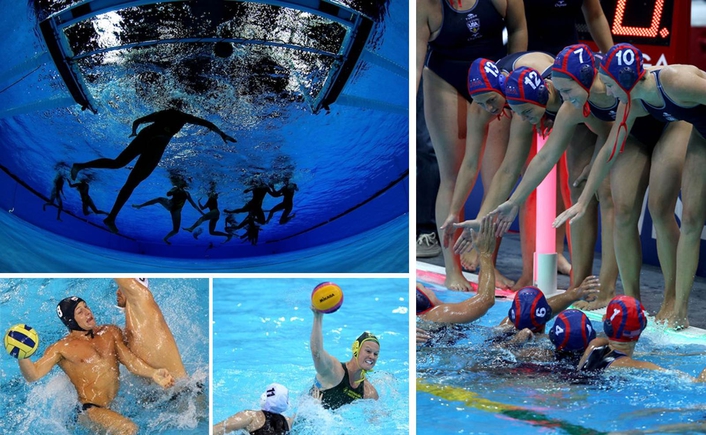