Qualification spots in the triathlon are allotted to National Olympic Committees rather than to individual athletes
A triathlon is a multi-sport event involving the completion of three continuous and sequential endurance events. While many variations of the sport exist, triathlon, in its most popular form, involves swimming, cycling, and running in immediate succession over various distances. Triathletes compete for fastest overall course completion time, including timed "transitions" between the individual swim, bike, and run components.

Transition areas are positioned both between the swim and bike segments (T1), and between the bike and run segments (T2) and are where the switches from swimming to cycling and cycling to running occur. These areas are used to store bicycles, performance apparel, and any other accessories needed for preparing for the next stage of the race. The time spent in T1 and T2 is included in the overall time of the race. Transition areas can vary in size depending on the number of participants expected for the race. In addition, these areas provide a social headquarters prior to the race.

The nature of the sport focuses primarily on persistent and often periodized training in each of the three disciplines, as well as combination workouts and general strength conditioning.

History
Triathlon is considered by some to have its beginnings in 1920s France. According to triathlon historian and author Scott Tinley (and others), the origin of triathlon is attributed to a race during the 1920s–1930s that was called variously "Les trois sports", "La Course des Débrouillards", and "La course des Touche à Tout". This race is held every year in France near Joinville-le-Pont, in Meulan and Poissy.

An earlier tri-sport event in 1902 featured running, cycling, and canoeing. There are documented tri-sport events featuring running, swimming, & cycling (not necessarily in that order) in 1920, 1921, 1945, and the 1960s. In 1920, the French newspaper L´Auto reported on a competition called "Les Trois Sports" with a 3 km run, 12 km bike, and a swim across the channel Marne. Those three parts were done without any break. Another event was held in 1921 in Marseilles with the order of events bike-run-swim. There are also articles in French newspapers about a race in Marseille in 1927. There is a 1934 article about "Les Trois Sports" (the three sports) in the city of La Rochelle, a race with: (1) a channel crossing (c. 200 m), (2) a bike competition (10 km) around the harbor of La Rochelle and the parc Laleu, and (3) a run (1200 m) in the stadium André-Barbeau. 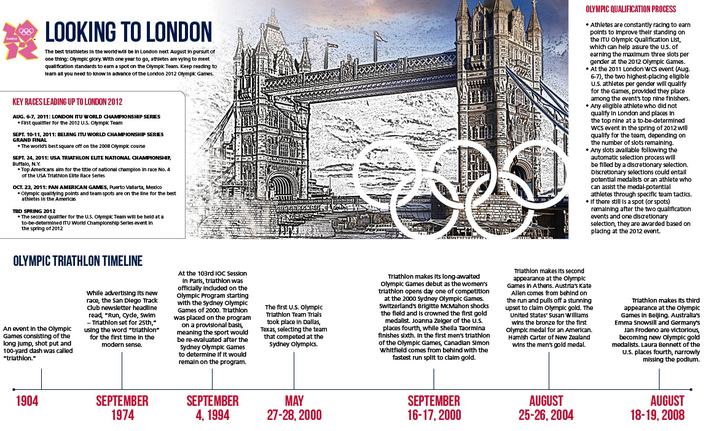 The 2000 Summer Olympics saw the first appearance of the triathlon. 48 women and 52 men competed in separate triathlons. The distances used were the "international" or "standard" ones, with a 1.5 km (0.93 mi) swim, 40 km (25 mi) cycle, and a 10 km (6.2 mi) run. The 2004 triathlon was identical to the first in distance, but the 100-athlete quota was evened between 50 women and 50 men. The quota was further increased to 55 women and 55 men for the 2008 Beijing Olympics and remains the same for London 2012. In London, the women's triathlon takes place on Saturday 4 August and the men's on Tuesday 7 August. The triathlon will be one of the best free to view events during the games, with most of Hyde Park open for spectators without tickets.

Competition
The Olympic triathlon is composed of two medal events. One is for men and the other is for women. Both use the same distances of 1.5 km, 40 km, and 10 km. Mass starts are used and drafting is allowed during the cycling phase. More than half a million spectators lined the Sydney streets to watch the first ever Olympic Triathlon at the 2000 Games. The six Triathlon events held since the sport’s Olympic debut have been won by athletes from six different countries: Canada and Switzerland in 2000; New Zealand and Austria in 2004; and Germany and Australia in 2008.

At London 2012, the Triathlon will begin and end in Hyde Park. The events will begin with a 1,500m swim in the Serpentine; continue with a seven-lap, 40km bike ride around a course that takes in Buckingham Palace and the Wellington Arch; and end with a four-lap, 10km run around the Serpentine to the finish.

About the Swim Course
Swim course - 1 lap: The swim takes place in the beautiful and majestic serpentine with a dive start from the swim platform placed on the north side of the lake. Elite athletes will swim one lap of 1,500 meters.

About the Bike Course
Bike course - 7 laps: The athletes will leave the transition area on Serpentine Road in the direction of West Carriage Drive. They will then cycle via South Carriage drive toward Hyde Park Corner into Serpentine Road, where the race pack will then pass the transition area and grandstands on every loop. The bike course is generally flat with no climbs. A few speed bumps and tight turns makes it technically demanding.

Each country is limited to six athletes (three men and three women). 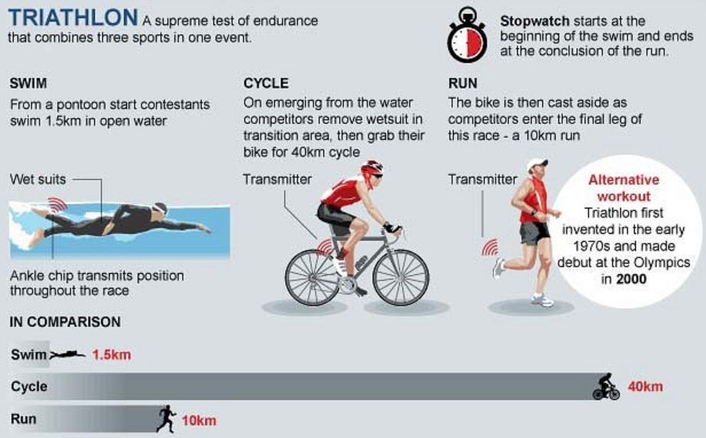