The London 2012 Taekwondo Competitions will be held at the ExCel
Expect plenty of excitement at ExCeL when the Taekwondo competitors take to the court at the London 2012 Olympic Games.

The word Taekwondo translates into English as the way of foot and fist – an accurate description of the principles behind this Korean martial art. Powerful kicks and punches are, literally, the name of the game, which offers tension, drama and plenty of action.

History
Taekwondo is a martial art that in "todays" form of self defense has evolved by combining many different styles of martial arts that existed in Korea over the last 2,000 years and some martial arts styles from countries that surround Korea. Taekwondo incorporates the abrupt linear movements of Karate and the flowing, circular patterns of Kung-fu with native kicking techniques. Over fifty typically Chinese circular hand movements can be identified in modern Taekwondo. A few of the earlier martial arts styles that contributed to Taekwondo are: T'ang-su, Taek Kyon, also known as Subak, Tae Kwon, Kwonpup and Tae Kwonpup. There are also influences from Judo, Karate, and Kung-fu.

The earliest records of Taekwondo practice date back to about 50 B.C. During this time, Korea was divided into three kingdoms: Silla, which was founded on the Kyongju plain in 57 B.C.; Koguryo, founded in the Yalu River Valley in 37 B.C.; and Paekche, founded in the southwestern area of the Korean peninsula in 18 B.C. Tae Kyon ( also called Subak) is considered the earliest known form of Taekwondo. Paintings from this time period have been found on the ceiling of the Muyong-chong, a royal tomb from the Koguryo dynasty. The paintings show unarmed people using techniques that are very similar to the ones used by Taekwondo today. 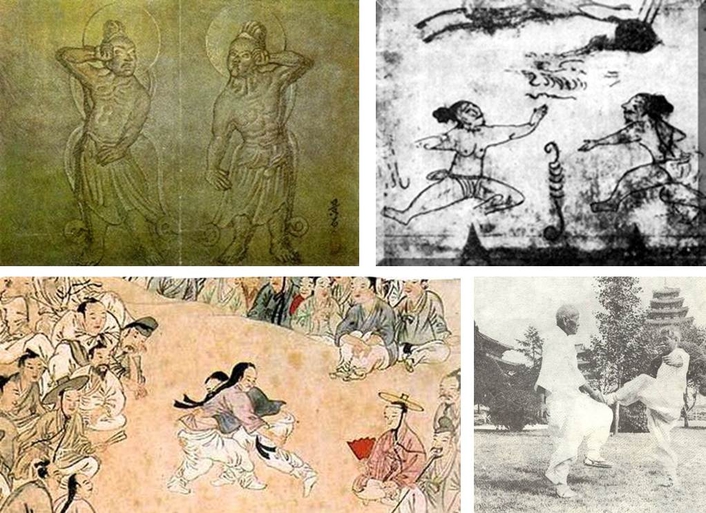 Taekwondo made its debut as a demonstration sport at the Seoul 1988 Games and the Barcelona 1992 Games, but was not officially added to the Olympic programme until the Sydney 2000 Games. It is one of only two Asian martial arts (the other being judo) included in the Olympic Games.

Modern Taekwondo was formulated in 1955. Now more than 60 million people in 190 countries take part. At the Olympics, competitors fight according to the code laid down by the Word Taekwondo Federation (WTF).

Taekwondo thus, is the technique of unarmed combat for self defense that involves the skillful application of techniques that include punching, jumping kicks, blocks, dodges, parrying actions with hands and feet. It is more than a mere physical fighting skill, representing as it does a way of thinking and a pattern of life requiring strict discipline. It is a system of training both the mind and the body in which great emphasis is placed on the development of the trainee's moral character.

The Basics
Taekwondo translates into English as 'the art of foot and fist' – and it is exactly that, a battle of kicks and punches.

Taekwondo contests are fought on a court measuring 8m x 8m. Competitors need powerful and explosive legs - to launch jumping attacks from and to support themselves during standing, single-leg kicks. Like boxing, they must also be conditioned to a level where they can ‘take’ attacks from competitors. 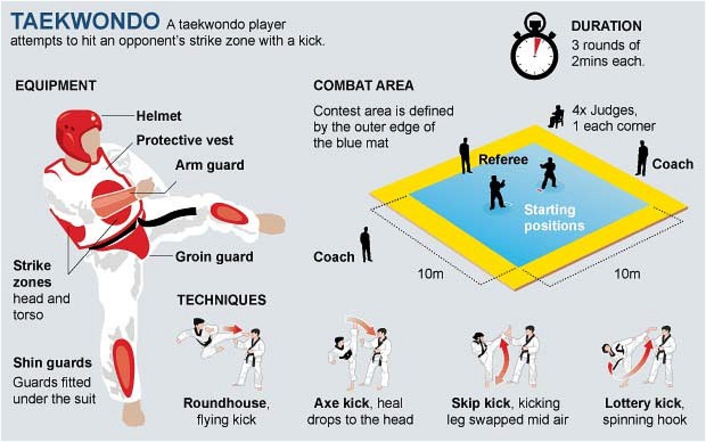 Tactics employed vary from fight to fight. For instance, taller competitors are likely to sit back and use their greater range against shorter opponents, who will be trying to get in close to prevent or avoid the kick.

Most points in taekwondo are scored via counter-attacking kicks or punches which require fighters to posses good anticipation. It is a sport about speed - of thought and execution - more than a sport of sheer brute force.

Injuries are common due to the physical nature of the competition - and the intensity of training. An important part of competition fighting is refueling and preparing the body between bouts. This involves eating increased amount of protein to aide muscle regeneration, treatment of bruising (ice-baths) and plenty of rest. 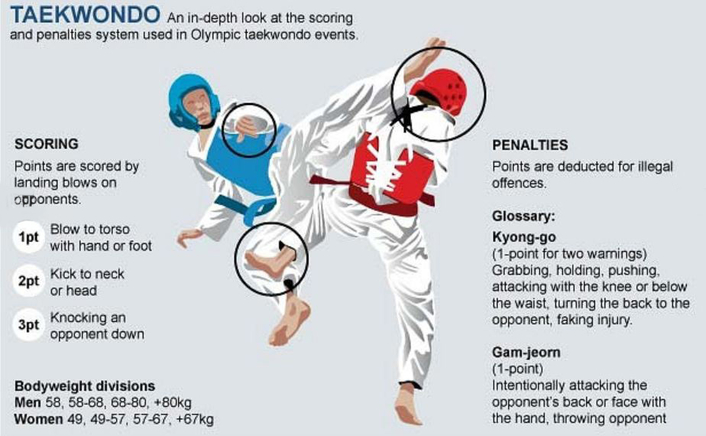 Each contest is made up of three two-minute rounds. Over their standard white uniform, known as a dobok, competitors wear coloured protective equipment. The competitor wearing blue is referred to as chung, while the competitor in red is hong.

To be valid, shots must be of sufficient force. If the scores are level after three rounds, a fourth “sudden death” round is held to determine the winner.

A referee stays in the combat area, while corner judges sit at each corner of the court. The judges award points for valid kicks and punches that are recorded electronically.

Infringing the rules can see valuable points awarded to the opposition. Penalties range from Kyong-go (a warning penalty) for acts such as crossing the boundary line, hitting below the waist or using the knee to attack. Two Kyong-go warnings result in a point being awarded to the opponent. More seriously, a Gam-Jeom (deduction penalty) is given for actions such as attacking a fallen opponent, or intentionally attacking the face. A Gam-Jeom results in a one-point deduction.

If an athlete receives four penalty deduction points, the contest is stopped and the opponent is declared the winner.

Each country is limited to two men and two women across all events, and to only one athlete in any particular event. 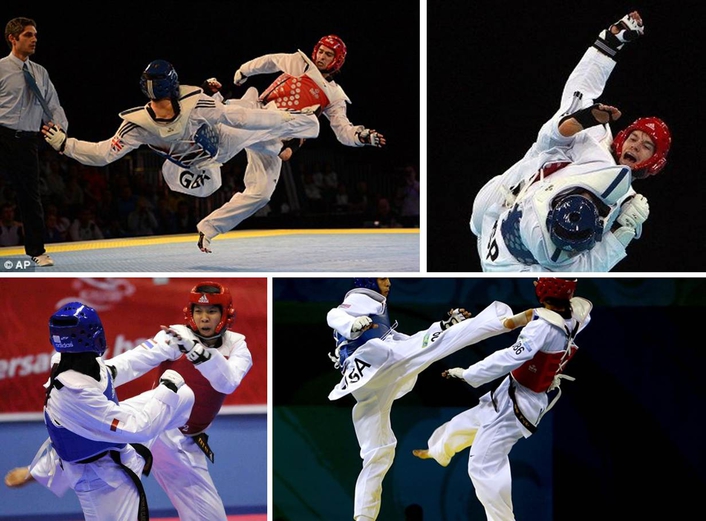