The London 2012 Table Tennis Competitions will be held at the ExCel
Power, subtlety and lightning-fast reflexes will all be on display at ExCel during the Table Tennis competition. The sport has come a long way from its origins in the late 19th century, when it developed as an after-dinner game played by upper-class English families. More than a century later, Table Tennis is a breathtaking spectacle that blends power, speed, skill and subtlety. It’s the biggest participation sport in the world.

To anyone who witnessed China’s clean sweep of all four gold medals in Beijing, there is absolutely no reason to believe that anything will change in London. The extraordinary enthusiasm of the Chinese fans may be hard to replicate in the ExCel but it will be one of the best shows at the Games, with the quality of fare on offer guaranteed to be as compelling, almost hypnotic, as ever.

History
The game originated as a sport in Britain during the 1880s, where it was played among the upper-class as an after-dinner parlour game, then commonly known as "wiff-waff".  A row of books were stood up along the center of the table as a net, two more books served as rackets and were used to continuously hit a golf-ball from one end of the table to the other. Alternatively table tennis was played with paddles made of cigar box lids and balls made of champagne corks. The popularity of the game led game manufacturers to sell the equipment commercially. Early rackets were often pieces of parchment stretched upon a frame, and the sound generated in play gave the game its first nicknames of "wiff-waff" and "ping-pong". A number of sources indicate that the game was first brought to the attention of Hamley's of Regent Street under the name "Gossima". The name "ping-pong" was in wide use before British manufacturer J. Jaques & Son Ltd trademarked it in 1901.

The next major innovation was by James Gibb, a British enthusiast of table tennis, who discovered novelty celluloid balls on a trip to the US in 1901 and found them to be ideal for the game. This was followed by E.C. Goode who, in 1901, invented the modern version of the racket by fixing a sheet of pimpled, or stippled, rubber to the wooden blade. Table tennis was growing in popularity by 1901 to the extent that table tennis tournaments were being organized, books on table tennis were being written, and an unofficial world championship was held in 1902. 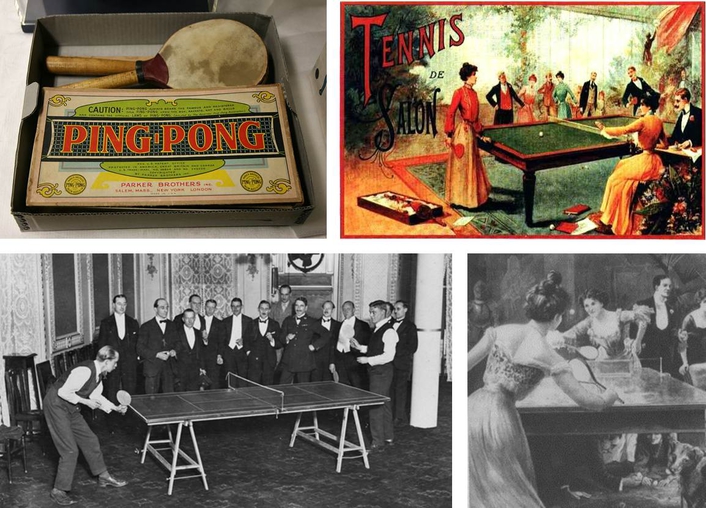 In 1921, the Table Tennis Association was founded in Britain, and the International Table Tennis Federation followed in 1926. London hosted the first official World Championships in 1926.

In the 1950s, rackets that used a rubber sheet combined with an underlying sponge layer changed the game dramatically, introducing greater spin and speed. These were introduced to Britain by sports goods manufacturer S.W. Hancock Ltd. The use of speed glue increased the spin and speed even further, resulting in changes to the equipment to "slow the game down". Table tennis was introduced as an Olympic sport at the Olympics in 1988.

After the 2000 Summer Olympics in Sydney, the International Table Tennis Federation instituted several rules changes aimed at making table tennis more viable as a televised spectator sport. First, the older 38 mm balls were officially replaced by 40 mm balls in 2000. This increased the ball's air resistance and effectively slowed down the game. By that time, players had begun increasing the thickness of the fast sponge layer on their rackets, which made the game excessively fast and difficult to watch on television. Second, the ITTF changed from a 21-point to an 11-point scoring system in 2001. This was intended to make games more fast-paced and exciting. The ITTF also changed the rules on service to prevent a player from hiding the ball during service, in order to increase the average length of rallies and to reduce the server's advantage.

Since Table Tennis joined the Olympic programme in 1988, China has won 20 of the 24 available gold medals. The country where table tennis is played by 300 million and appears little short of a religion, has won 41 medals.  The only European Olympic gold medallist so far has been the legendary Swedish player Jan-Ove Waldner: nicknamed ‘the Mozart of Table Tennis’, Waldner won the men’s Singles at the Barcelona 1992 Games.

The Basics
Table Tennis is based on the same basic principles as Tennis, but it has a very different scoring system, and a ball weighing just 2.7g.

As in tennis, players must allow the ball only one bounce on their side of the court before returning it to their opponent. Points are scored if the opponent is unable to return the ball, or if they hit the ball ‘out’ of the court, ie it does not bounce on the table. 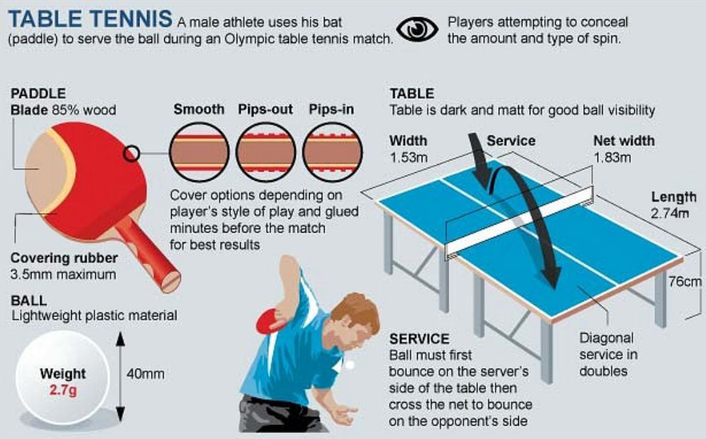 Singles matches are played over the best of seven games, with the first player to 11 (by a margin of two) winning each game. In team matches, four singles matches and one doubles match are played, each decided by the the best of five games. Each team consists of three players and matches end when a team has won three individual games.

Both disciplines are run in a knockout format with players and teams going through to the finals where the medals will be decided. 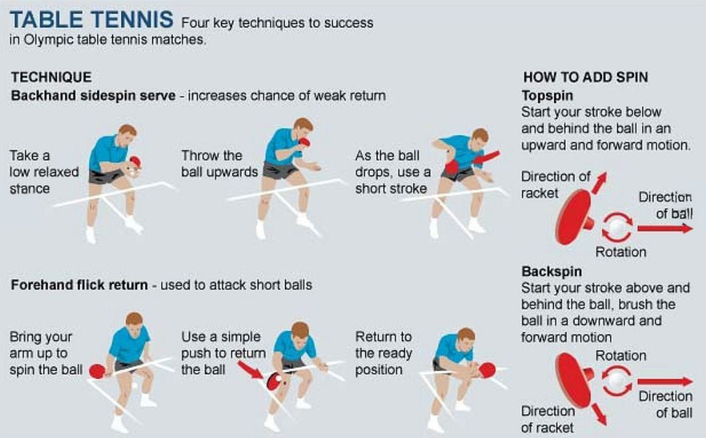 It is estimated during a rally the average speed of a ball is 25mph, meaning that it can travel the length of a table in a quarter of a second. Serves travel at around 60mphs.

The Format
The aim of the game is to keep the ball in play for longer than your opponent, so relies on tactics similar to those used in tennis.

Players will try and work out their opponents weakness, and then attempt to exploit it by firing shots at their weak spot. Suddenly changing direction and moving your opponent around the table can be a good way to get past their defence.

Varying the spin and speed of the shots can make it more difficult for your opponent to work out where the ball will land. Attacking shots will normally have plenty of topspin, while defensive shots put backspin on the ball.

Servers often use deceptive spin on their serves to fool their opponents. Players will aim to use serving motions that look similar so that an opponent will be unable to tell if the ball is coming at them with lots of backspin or sidespin, making it hard for them to choose an effective return shot.

Another effective, but hard to master technique, is the fake serve, where servers will mimic the serving motion to fool their opponent into thinking they have served before they actually have. This allows them to create space on the table and serve to the area their opponent has vacated. 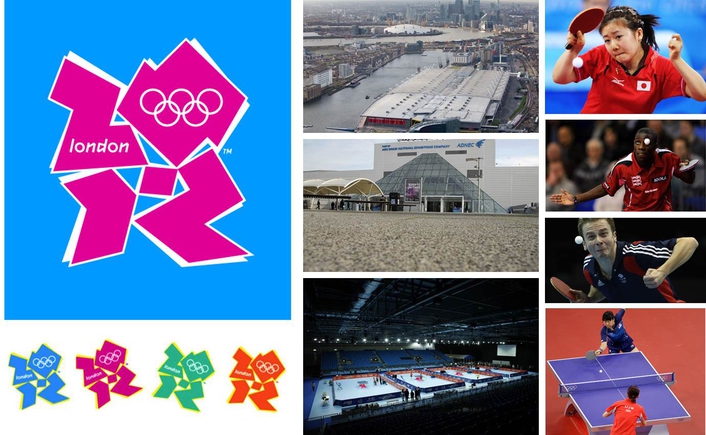 An umpire and assistant umpire sit or stand on either side of the table, in line with the net.  They are responsible for ensuring the game is played within the rules and that the score is kept and announced accurately.

As well as matching the speed of play of their opponent, players need to ensure they stay within the rules of the game. A point can be awarded to the opposition for an infringement such as touching the table or net, an illegal serve, or a Doubles player striking the ball out of sequence.

Each country is limited to three men and three women across all events, and to two athletes in each Singles event.
Field of play: The court is 18m x 9m; the Table Tennis table itself is 2.74m long and 1.525m wide. It is 76cm above the floor and divided in half by a 15.25cm high net. 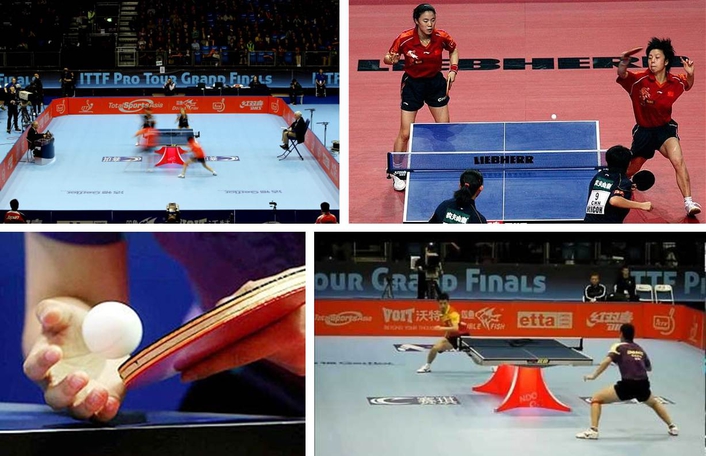