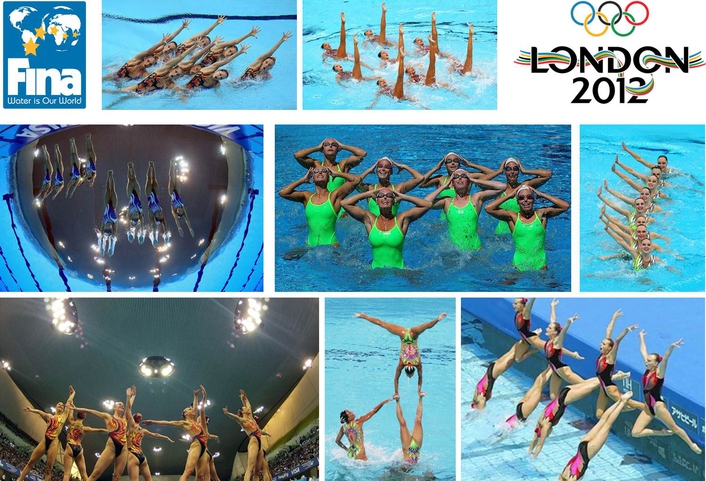 Synchronized swimming is a hybrid form of swimming, dance and gymnastics, consisting of swimmers (either duets or teams) performing a synchronized routine of elaborate moves in the water, accompanied by music. Synchronized swimming demands advanced water skills, and requires great strength, endurance, flexibility, grace, artistry and precise timing, as well as exceptional breath control when upside down underwater.

Having made its Olympic debut at the Los Angeles 1984 Games, the all-female event will be held at the dazzling Aquatics Centre during London 2012.

History
At the turn of the 20th century, synchronized swimming was known as water ballet. The first recorded competition was in 1891 in Berlin, Germany. Many swim clubs were formed around that time, and the sport simultaneously developed within several countries, including Australia, Canada, France, Germany, and the USA. As well as existing as a sport, it often constituted a popular addition to Music Hall evenings, in the larger variety theatres of London or Glasgow which were equipped with huge on-stage water tanks for the purpose.

While exclusively a sport performed by men in its first days, it quickly became a women's sport because the nature of the physical movements are more suitable to the female physique (i.e. center of gravity). In 1907, Australian Annette Kellerman popularized the sport when she performed in a glass tank as an underwater ballerina in the New York Hippodrome. It was later popularised by American film star Esther Williams, who performed water ballet in several Hollywood movies, or aqua-musicals as they were known, in the 1940s and ‘50s.

After experimenting with various diving actions and stunts in the water, Katherine Curtis started one of the first water ballet clubs at the University of Chicago, where the team began executing strokes, "tricks," and floating formations. On May 27, 1939, the first U.S. synchronized swimming competition took place at Wright Junior College between Wright and the Chicago Teachers' College, five decades before the sport made its Olympic debut at the Los Angeles 1984.

It became a fully-fledged Olympic sport at the Los Angeles Games in 1984 and with the removal of softball from the Olympic programme, synchronised swimming is now one of only two events - rhythmic gymnastics being the other - that is open to women only.

The Basics
Aided by underwater speakers, duets or teams of eight swimmers perform short routines to a musical accompaniment. 10 judges, who are divided into two groups, with one panel awarding points for technical merit and the other for artistic impression, mark a variety of components during the course of a routine, including choreography, difficulty and execution.

Swimmers must execute a technical routine, in which they perform a series of specific moves in a set order, and a freestyle routine, which allows them to perform their own choreographed material. 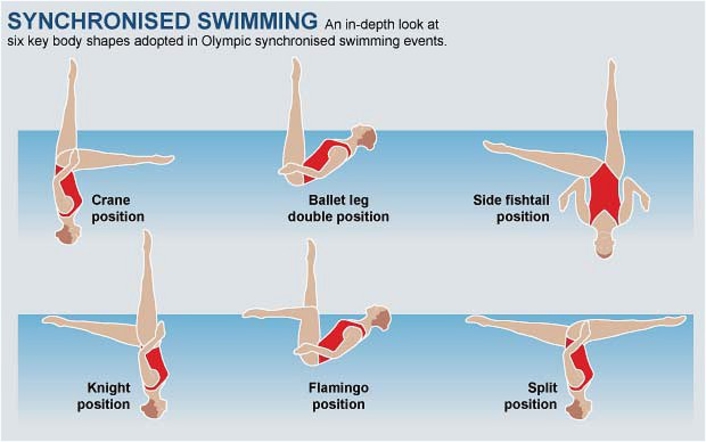 Although swimmers are permitted to wear nose clips, goggles are forbidden. It is also against the rules for competitors to make deliberate use of the bottom of the pool. Any transgression is punishable by a two-point deduction.

The sport demands great core strength and endurance as well as grace, artistry and flexibility. It also requires remarkable breath control and lung capacity, with swimmers remaining underwater for up to 60 seconds at a time. In both the duet and team events timing is essential, not just with the music but with team-mates too. Nothing looks worse than an out-of-sync routine. 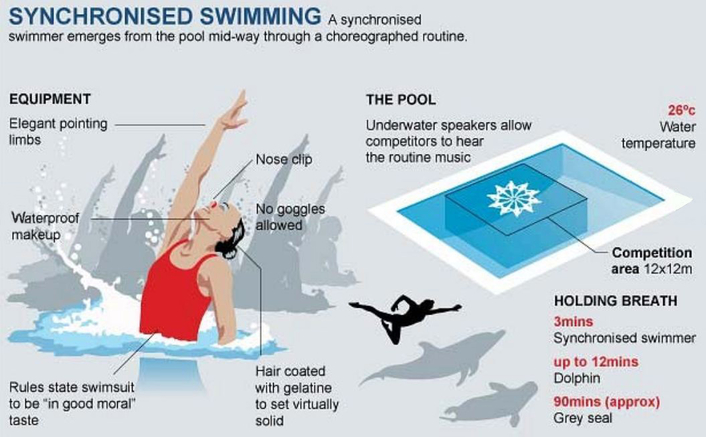 Swimmers will also often wear heavy make-up and lipstick (all waterproof, of course) to accentuate the artistic element of their routine as well custom-made swimsuits to complement their choice of music.

The Format
Eight countries compete in the team event. The first five spots go to the winners of the five different continental championships. The final three teams qualified at an Olympic selection event in April 2012.

Each of these eight teams then got to field two of their athletes in the duet event, alongside the five duets who scored highest at the continental championships (and would not have qualified otherwise.)

In the technical routine, one panel judges the execution, including the required elements. The other panel is looking at the overall impression: choreography, synchronisation, difficulty and manner of presentation. 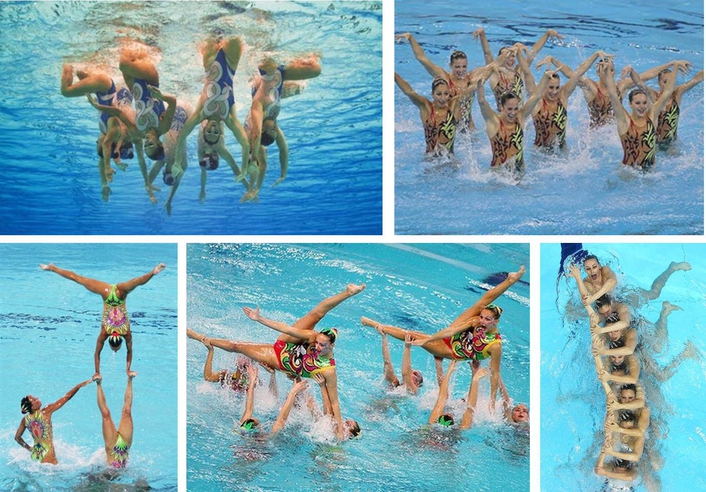 In the free routine, the technical merit judges score the difficulty and execution of strokes/movements as well as the synchronisation of the swimmers. The other panel is looking at artistic impression, which includes choreography, music interpretation and manner of presentation.

The eight countries with entrants in both the Duets and the Teams events are limited to nine athletes in total, from which two compete in the Duets event and eight compete in the Teams event. The remaining 16 countries compete only in the Duets event and are limited to two athletes.
Field of play: Part of the pool used for Swimming events is used for this competition. The area used for Synchronised Swimming is 30m long, 25m wide and 3m deep. 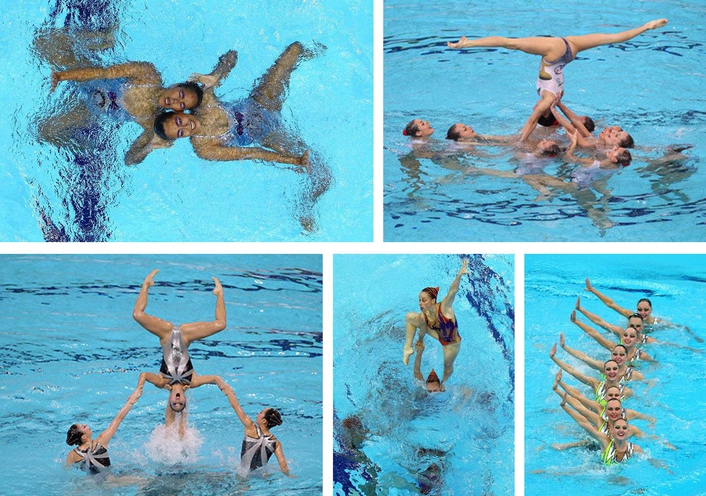