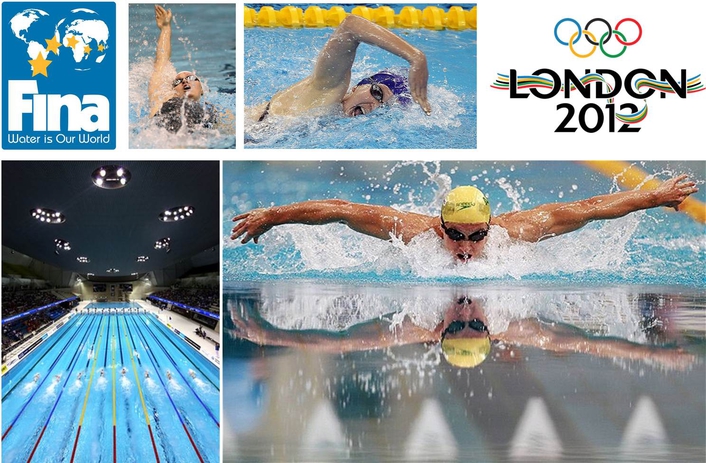 The London 2012 Swimming Competitions will be held at the Aquatic Centre
Hugely popular around the world as a leisure activity and a competitive sport, Swimming has featured at every modern Olympic Games. Other than the Marathon Swimming 10km event, held in the Serpentine in Hyde Park, the Swimming competition will take place in the Aquatics Centre in the Olympic Park.

Swimming was one of the highlights of the Beijing 2008 Olympic Games. Twenty-one world records were broken, and Michael Phelps set the world record for the number of medals won at a single Olympic Games. Speed, strength and stamina will be key for athletes in the competition which features no fewer than 34 medal events.

History
Swimming has been recorded since prehistoric times; the earliest recording of swimming dates back to Stone Age paintings from around 7,000 years ago. Written references date from 2000 BCE. Some of the earliest references to swimming include the Gilgamesh, the Iliad, the Odyssey, the Bible, Beowulf, and other sagas. In 1578, Nikolaus Wynmann, a German professor of languages, wrote the first swimming book, The Swimmer or A Dialogue on the Art of Swimming. Competitive swimming in Europe started around 1800, mostly using breaststroke. Swimming was part of the first modern Olympic games in 1896 in Athens. In 1902 Richmond Cavill introduced the front crawl to the Western world. In 1908, the world swimming association, Fédération Internationale de Natation (FINA), was formed. Butterfly was developed in the 1930s and was at first a variant of breaststroke, until it was accepted as a separate style in 1952.

At the first few modern Olympic Games, Swimming events were held in open water. At Paris in 1900, for instance, they took place in the River Seine. However, the rules were formalised in 1908, when the London Games staged the first Olympic Swimming competition to be held in a pool. Women’s events were introduced at the Stockholm 1912 Games. 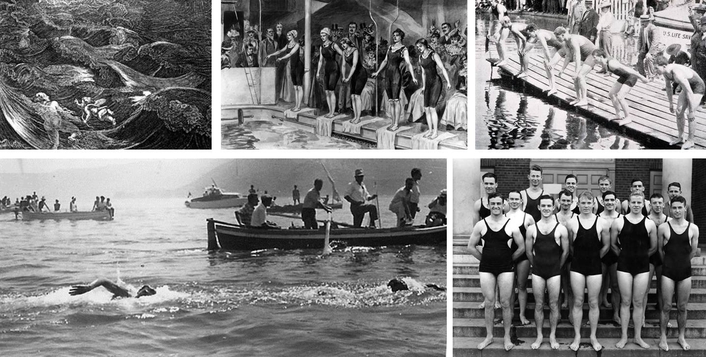 Open water: Long-distance swimming is one of the newest events in the Olympic programme but also, curiously, one of the oldest. While it made its debut in Beijing in 2008 with the introduction of men’s and women’s 10km races, it is a throwback to the first modern Olympic Games in Athens in 1896, when swimming races were staged in the bitterly cold Bay of Zea.

Open-water swimming has a long and colourful history stretching back to 36BC, when the first known races were organised in Japan. The ancient Romans also held races in the Tiber, which attracted huge crowds along the banks. 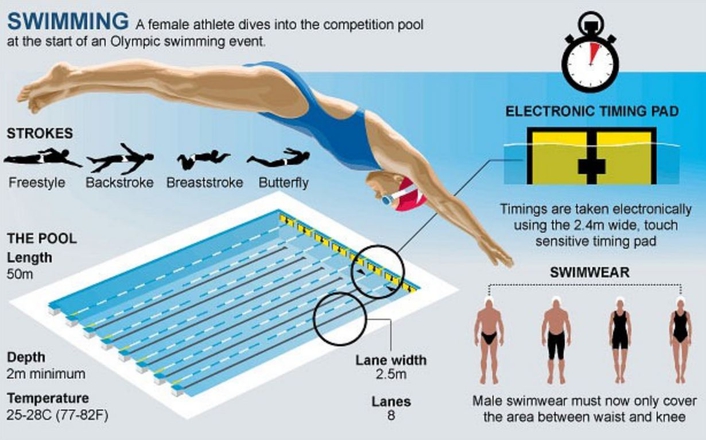 Olympic races in the pool are conducted over a variety of distances, from 50m (one length of the pool) all the way up to 1500m (30 lengths). The first athlete to touch the electronic finishing touchpad at the end of the pool in each race is the winner.

Technique varies from stroke to stroke, but, as a general rule, swimmers need to use their body position to make themselves as streamlined as possible, so that they can propel through the water with minimal drag. Breathing and timing is also very important, and should be used to maximise the distance travelled with each stroke.

The biggest change from 2008 is the new rules on swimwear. Gone are the impermeable, full-body suits that allowed a staggering 25 world records to be broken in Beijing. Male swimmers are now restricted to a pair of textile shorts and women to textile suits that must not extend above the shoulder or below the knee.

10km Swimming will take place at the Serpentine in Hyde Park

In recent years world records have tumbled - even before the introduction of the new, now banned, swimsuits - and one of the main reasons for this is a greater importance being placed on ‘the fifth stroke’ of swimming - otherwise known as the dolphin kick. The stroke is used when swimmers reach one pool wall and have to turn. They kick-out, mimicking a dolphin flip. Led by Michael Phelps, swimmers have realised that by staying underwater longer and not rising to the surface so quickly they can increase their speed, leading to new records being set.

The Format
Swimming is one of the easiest Olympic sports to understand, which may explain its popularity with spectators.

Swimmers use four strokes: freestyle (or front crawl), breaststroke, backstroke and butterfly. A medley race is one where all four strokes are used. Most of the races take place in the middle eight lanes of a 50 metre long, 10 lane wide pool, but a longer 10 km race takes place in open water.

Pool: In a simple test of swimming speed, victory goes to the athlete who touches the pool wall first at the end of the race. In breaststroke and butterfly, swimmers must touch the wall with both hands simultaneously.

Races start with heats, the number of which depends on the number of swimmers in the event. Swimmers are seeded according to FINA rules, based on the final entry lists. These seedings are used to determine the heat each swimmer starts in – the top seeds are placed in different heats. Seedings are also used to determine the lane each athlete swim in – the higher the seeding, the closer to the centre lanes of the pool.

For 50m, 100m and 200m events, the top 16 swimmers from the heats progress to the semi-finals, and the top eight from these compete in the final. As in the heats, the swimmers’ seedings are used to decide which semi-final they swim in and which lane they are allocated. In 400m, 800m, 1500m and relay events, swimmers progress from the heats straight to the final.

Officials: Swimming events need many officials including timekeepers, start and finish judges, stroke judges, turn judges and an overall chief referee who is in charge of the competition. 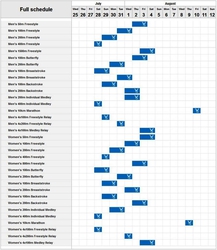 Athletes: 950 (900 in pool events, 50 in Marathon Swimming)
Each country is limited to two athletes in each individual event and one team in each relay event.

Field of play: The swimming pool is 50m long, 25m wide and 3m deep. It is divided into 10 lanes, although only the centre eight are used for competition.