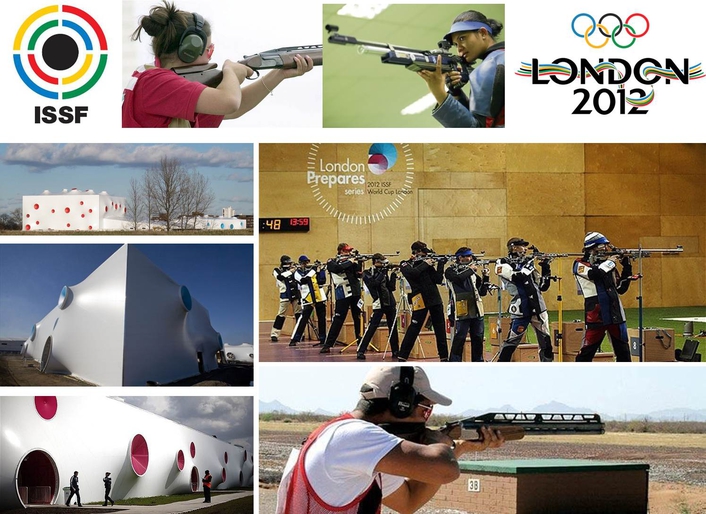 History
Although shooting competition dates back several centuries, its beginnings in Olympic form are much younger. Olympic shooting was part of the first modern Olympic games in 1896, and although the program's size has grown and receded since then, its enduring presence clearly illustrates an appreciation of the importance of precision shooting in a world that's sometimes dominated by "spray and pray" firepower (meaning when a shooter flings out multitudes of bullets, and prays he hits his target).

With the exceptions of the St Louis1904 and Amsterdam 1928 Games, Shooting has featured on every Olympic programme. Women’s events were added to the schedule at Los Angeles 1984. 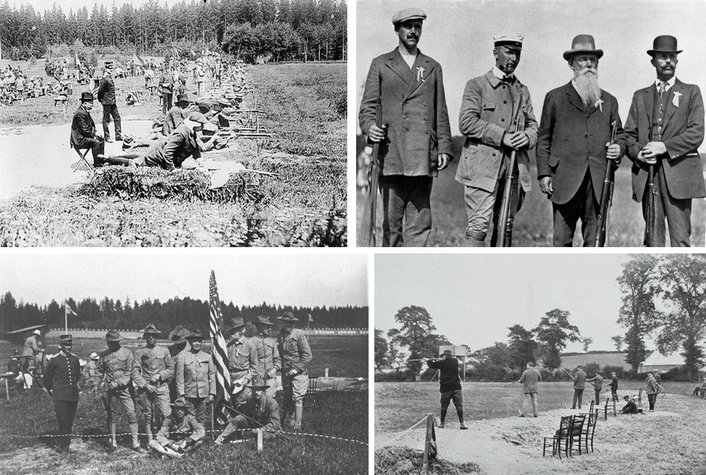 Having been practised competitively for centuries, the tense and demanding sport of Shooting is popular all over the world.

The Basics
From the beginning, rifle and pistol shooting was all about hitting the target as close to center as possible, as many times as possible within the maximum allowable shots. In shotgun events, shooters try to break all the moving clay targets that are thrown into the air. Those are the basics, and the basics haven't changed. 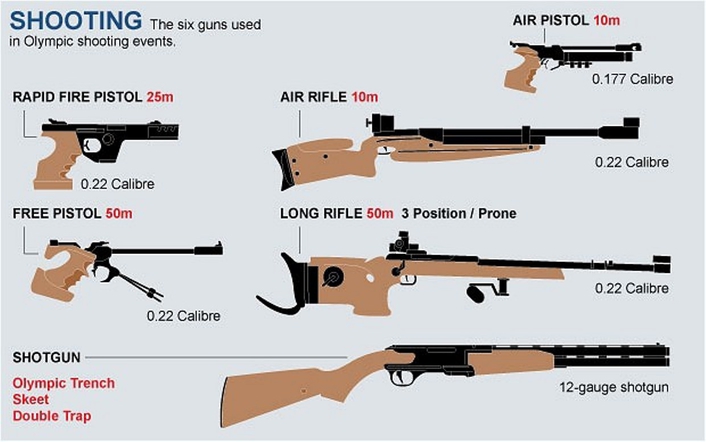 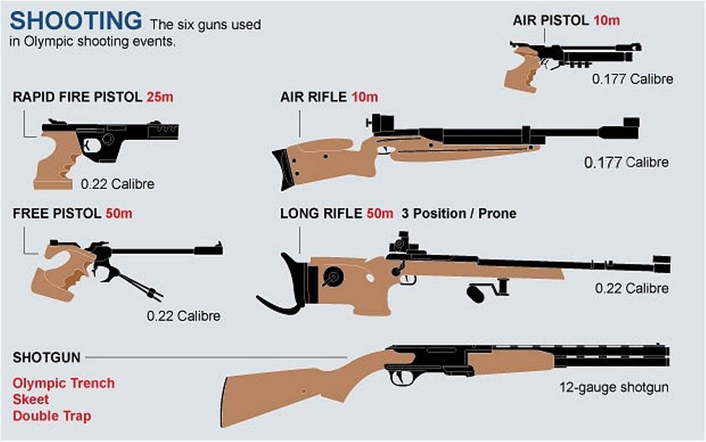 Mostly, what has changed is the equipment used and the clothing worn, along with the participation of women and the appearance of airguns on the Olympic shooting scene. Rules have changed and will likely continue to do so as time goes by.

Olympic Shooting events fall into three disciplines: Rifle, Pistol, and Shotgun events. In Rifle and Pistol events, competitors aim at a 10-ring target from a set distance (10m, 25m or 50m). Depending on the event, athletes are required to shoot from standing, kneeling or prone (lying down) positions.

In Shotgun events, competitors shoot at moving clay targets launched above and in front of them.

Getting your breathing right can be a big help, however, and holding your breath as you release the trigger will reduce the movement of the gun and make your shot more accurate. Likewise, squeezing the trigger gently rather than jerking it will make your aim more precise.

Excellent eyesight is the shooter’s best asset, so they wear glasses which not only protect their eyes from debris but also enhance their vision - by highlighting a target and contrasting everything else around it.

Judging wind is a crucial element of shooting and spotting scopes, which measure heat mirages rising from the ground, help athletes estimate wind speed and direction. The more accurate their estimates the more likely they are to successfully find their targets. Blinkers, which are attached to the side of an athlete’s glasses, are used to obstruct wind from the eye while shooting.

Shooting is a tense and testing sport that requires immense reserves of skill and nerve. The winning athlete must remain cool under the enormous pressure that an Olympic competition brings.

The Format
Athletes shoot at stationary targets in a range in the Rifle and Pistol events, and at moving targets in the Shotgun events. There are five events in each of the three disciplines (rifle, pistol and shotgun) with three for men and two for women.

All the events are individual and require shooters to adopt different positions: standing, kneeling or prone, where they lie on their fronts. Rules vary according to the discipline, with distance, types of target, arm, firing position, number of shots (between 20 and 60) and the time within which the shots have to be fired are all relevant factors.

Timing is key with strict rules on how long a shooter has to pull the trigger. In the rapid fire pistol, shooters have eights seconds to fire at the first five targets, six seconds for the second and four for the last. In the air pistol the final eight shooters have to fire 10 shots and are allowed 75 seconds for each.

The rifle and pistol classes require shooters to fire bullets at 10-ring target within a given time while the shotgun events - trap and skeet - sees them firing lead pellets at clay targets, released on or after shooters command.

The winner of the rifle and pistol events is the shooter with the highest score. During the qualification stages, the best eight shooters qualify and move to the final round where the 10 rings of the target are subdivided into ten “decimal” score zones (max 10.9). The final score is added to the qualification score to determine total scores and final rankings.

Shotgun shooters score points by hitting a ‘clay’, which is made not of clay but of pitch and chalk. A hit is declared by the referee when the target is shot and at least one visible piece is seen to fall from it. The shooter who hits the most targets wins. 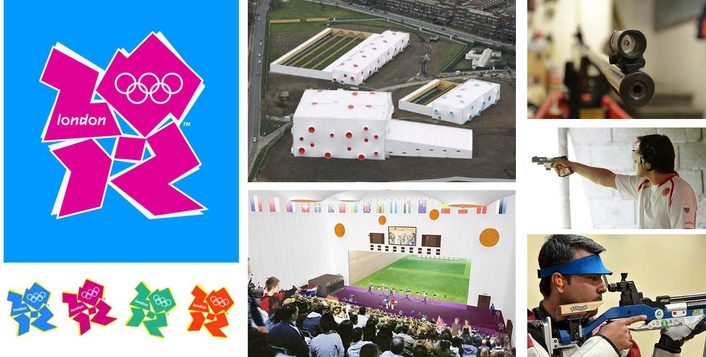 In the trap a shooter has 10 seconds to call for his target once the person in front has fired his shot. Each shooter is allowed two shots at their target.

A range officer is responsible for the safe running of the competition. Athletes must listen to their instruction and obey their words of command at all times.

An international jury is present at all events to ensure that shooters stay within the rules and to deal with any appeals.

Athletes: 390 (223 men and 143 women) 24 still to be confirmed
Each country is limited to 28 athletes (10 men and eight women). This equates to two athletes in all events, except for the women’s Trap and Skeet where only one athlete per country is allowed. 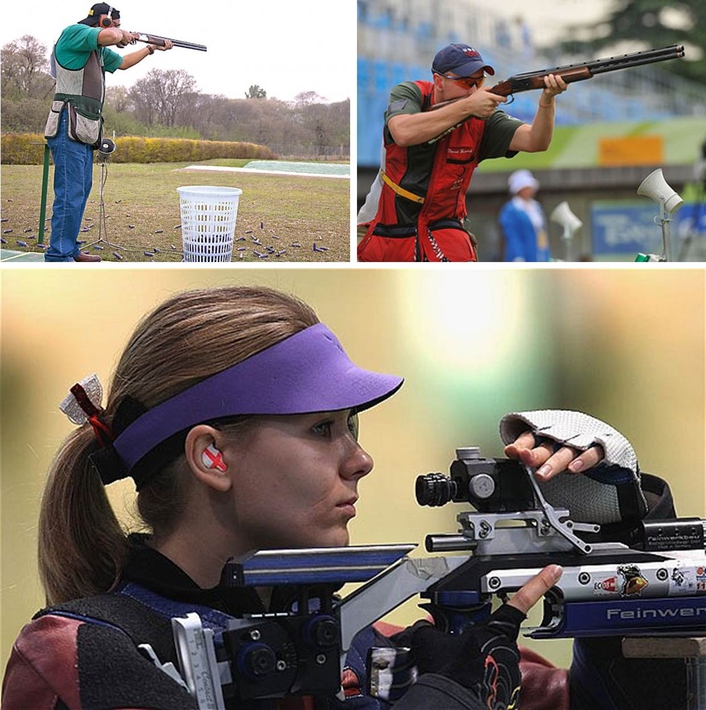