The London 2012 Sailing Events will take place at the Weymouth Bay and Portland Harbour
The waters of Weymouth Bay and Portland Harbour will play host to 10 exhilarating Sailing events during the London 2012 Olympic Games. Mastery over ever-changing conditions on open water requires skill and nerve. Both will be essential for competitors in the Sailing events, 14 days of competition that should offer plenty of excitement and drama in the beautiful but testing waters of Weymouth Bay, on the south coast of England.

The venue comprises the Weymouth and Portland National Sailing Academy (WPNSA) and the adjoining commercial marina. It has kick-started the regeneration of the former Naval Air Station at Portland, now known as Osprey Quay, where new residential, commercial and marina facilities were established. Weymouth and Portland provides some of the best natural sailing waters in the UK, with facilities on land to match. The site has already hosted numerous international sailing events, including the 2006 ISAF World Youth Championships attended by over 60 nations.

History
While yachting was not one of the original sports of the Olympics in Ancient Greece, it was probably there that the competitive aspect of the past time of sailing started to develop.

Sailing is one of the oldest sports on the Olympic programme and its Olympic history is littered with many heroes including some of the sporting world's great figures.

In more recent times, the first of the Modern Olympics was held in Greece in 1896, the planned Olympic Yachting regatta was cancelled due to very rough weather. So Paris hosted the very first Olympic Sailing regatta during the second games in the modern era. Since then, sailing has been held at all but the 1904 Games in the inland city of St. Louis USA.

In the early Olympic Games, sailing was dominated by bigger boats, sometimes with as many as 10-12 sailors, and time handicaps were used to adjudicate the races. Starting from 1924 and increasingly from the 1950s onwards, the trend has been towards smaller and smaller one-design boats with fewer crew members. In the last 20 years, equipment trials have resulted in several new boats reflecting the latest developments in the sport.

Olympic sailing classes were used in the sport of Sailing/Yachting during the Olympic Summer Games since 1896. Since then, 46 different classes have been used. Over a period of more than 112 years, in a sport that uses complex technical equipment, it goes without saying that classes will be discontinued for use at the Olympics. Reasons for discontinuation of a class did vary from economical, logistical and technological to emotional and even political. Some of the discontinued classes remain very strong International - or National classes. Others filled a niche in a specific area like sailing schools or local club racing. Some faded away.

Since 2008, the two-man Tornado and three-woman Yngling classes have been dropped, and the Women’s match racing class (three-woman keelboat) introduced. Women competed in the early Olympic sailing races and the event remained mixed until the 1988 Games when the first exclusively women’s race was held.

During the 2008 Beijing Games, only one event had a three-person crew (Yngling), with five events contested by lone sailors. Currently the line up of boats is a mixture between classes with a long and distinguished history, like the Star and the Finn, and those reflecting the design and technology advances in the sport, such as the 49er.

Women have always been allowed to compete in Olympic sailing with men, but in 1988, separate sailing events were introduced exclusively for women. The Olympic sailing programme in 2008 consisted of men's, women's and open events.

Sailing may not be the sport we discuss with our friends down the pub, but we use its language on a regular basis with phrases such as ‘plain sailing’, ‘the wind in your sails’, ‘all hands to the pump’, ‘weathering the storm’, ‘battening down the hatches’, ‘with flying colours’, ‘in the doldrums’.

In effect, sailing made its Olympic debut in Sydney, as it became the first Olympic sport to make a name change. The sport had always been called yachting in the past.

The Basics
Fiercely competed for, Olympic medals are an indication of a skill level and mental dedication demanded in no other Olympic discipline. No other sport demands 15 hours of concentration combined with physical exertion during one Olympic competition. Only in sailing, can 1 minute's loss of concentration over 7 days of racing be the difference between Gold and 4th. 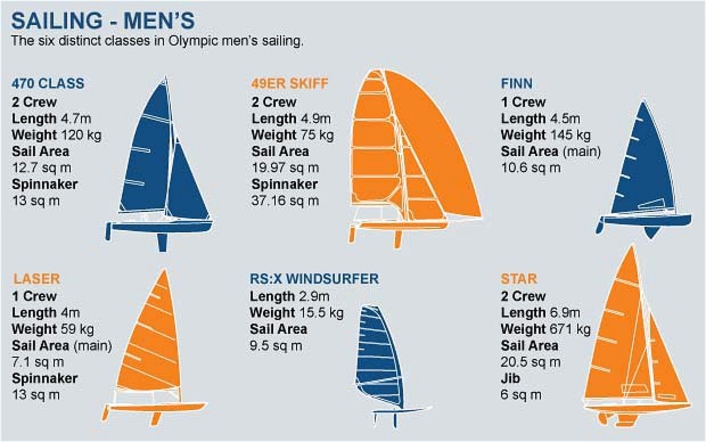 At London 2012, the 10 different Olympic Sailing events (six for men, four for women) will feature a variety of craft, from dinghies and keelboats to windsurfing boards.

There are three disciplines – match racing (one against one), fleet racing (mass start) and windsurfing – and 10 classes of boat.

Crew sizes vary from one to three, with Laser, Laser Radial, Finn and RS-X classes featuring one sailor; the 470, 49er and Star featuring two and the women’s match racing, three. 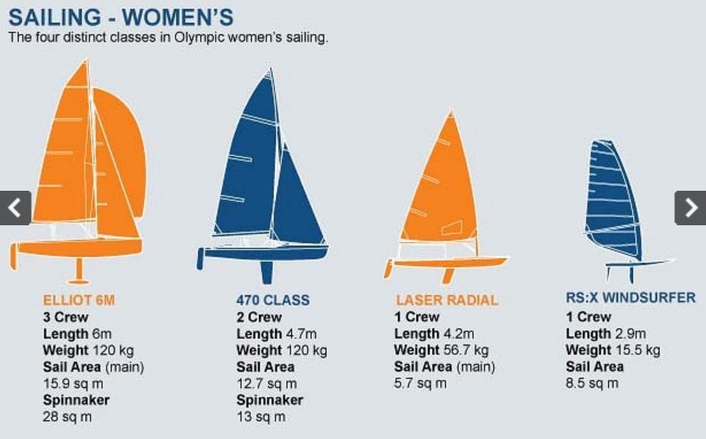 Three-time Olympic gold medalist Jochen Schumann once described sailing as “three-dimensional chess”, indicating the complexity of racing on the water.

The Format
Competitors contest 10 races (15 for the 49er) with points awarded depending on finishing positions in each race (1 point for first, 41 for 41st). Each boat is allowed to discard its worst score and the ten boats with the lowest accumulated scores qualify for the medal race, where points scored are doubled and added to the opening series’ scores to decide the top 10 positions.

In match racing, the first boat across the line wins the match. Teams compete against each other in a series of round robin matches, with the top teams progressing to the final knockout stages.

One boat may be leading the race, but if the others are struggling then overall that country will finish lower in the final standings. Boats can use the racing rules of Sailing to position themselves in a way that hinders their opponents and allows their team-mates to progress through the field.

Team GB’s Ben Ainslie is known, and often criticised by other competitors, for his aggressive racing style, but it seems to work as he has won four medals (three golds, one silver) at the last four Olympics in two different classes (Finn and Laser).

Weymouth and Portland Bay is a natural amphitheatre and there are several vantage points to watch the Sailing events from if you do not have a ticket. The Local Authority will be also providing a big screen to watch the Games coverage on Weymouth beach, and putting on a range of free sporting and cultural activities. There is no seated ticketing for the Sailing event, so spectators will be sitting on the ground or standing. 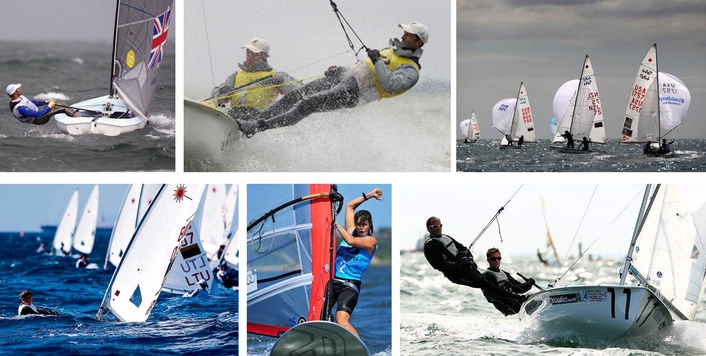