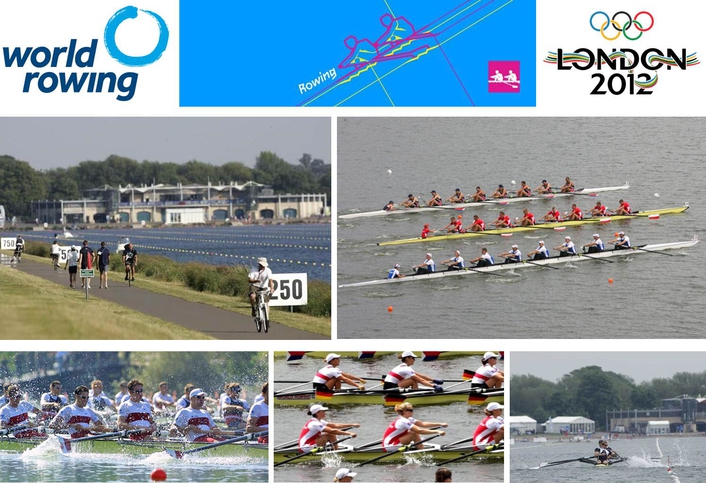 The London 2012 Rowing Competitions will be held at Eaton Dorney
The Rowing competition at the London 2012 Games will feature extraordinary displays of power and passion on the world-class waters at Eton Dorney. The venue is a 2,200m, eight-lane rowing course with a separate return lane constructed to international standards. It is set in a 400-acre park with a nature conservation area. In 2006, it hosted the Rowing World Championships, with high praise from both competitors and spectators.

The venue’s existing facilities have been enhanced for athlete warm-up and Canoe Sprint events during the Games. These works included the installation of a new 50m-span bridge over a widened entrance to the return lake for vehicles and pedestrians. A cut-through between the competition lake and the return lake, and a new bridge over this cut-through area have also been constructed. The new cut-through enables rowers to move between the rowing course and return lake.

History
Rowing first originated not as a sport, but as a means of transport in the ancient cultures of Egypt, Greece and Rome? It was also used in warfare, since superiority in the water was a sure way to win a war. The Athenians, for example, frequently won because their warships would ram enemy ships at great speed!

In the 1700s, rowing became popular with ordinary folk, and with watermen racing down the Thames in barges. The Thames was also home to two of the most famous rowing events in the world: the Doggett’s Coat and Badge Race (the oldest rowing contest in the world, held since 1715) and the Henley Royal Regatta.

Although its history dates back centuries, Rowing only came of age as a competitive sport in the last 200 years. Interest began to increase after Oxford and Cambridge Universities began their rivalry on the Thames in 1829, a rivalry that continues today in the shape of the annual Boat Race. By the 19th century, Rowing gained popularity in Europe and then America. The first champion was Toronto’s Ned Hanlan, who also has the distinction of being the first true world champion in any sport! 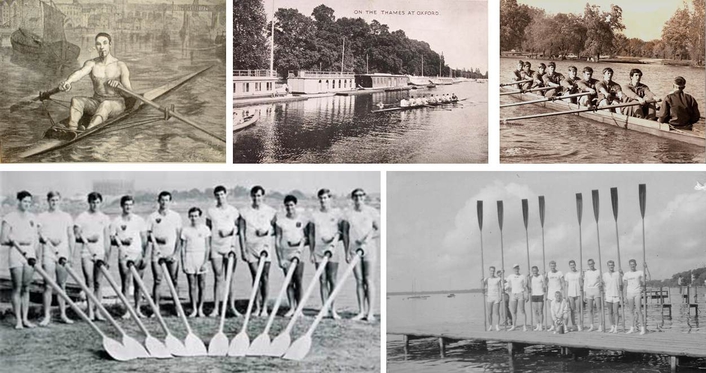 Rowing in the United States began in New York, and it continued to be a center of rowing activity until the 1950s. Today, Philadelphia and Boston are the two major American cities on the rowing map, with long, noble histories.

Baron Coubertin had a special liking for Rowing, and it was one of the original Olympic sports. Bad weather, however, postponed its scheduled debut at Athens in 1896, so its first appearance was at the 1900 Olympics. It has appeared at every Games since though women’s rowing was not introduced until Montreal in 1976. Lightweight rowing for men and women appeared 20 years later at Atlanta.

The Basics
Today’s sport is renowned for its competitors’ legendary displays of strength and stamina, as athletes push themselves through the pain barrier in an attempt to win Olympic gold. The 14 Olympic Rowing events range from the Single Sculls, featuring solo rowers, to the Eights, contested by teams of eight rowers plus a cox. All events are held over a 2,000m course, with the competition taking a total of eight days.

You don’t have to be super-skilled to be good at rowing; there’s basically just one simple sequence of movements to learn in order to master the technique. The hard part is repeating that sequence, up to 40 times a minute, for six or more minutes. Strength and endurance are obviously essential. If you are rowing in a crew, synchronisation and teamwork are also necessary. 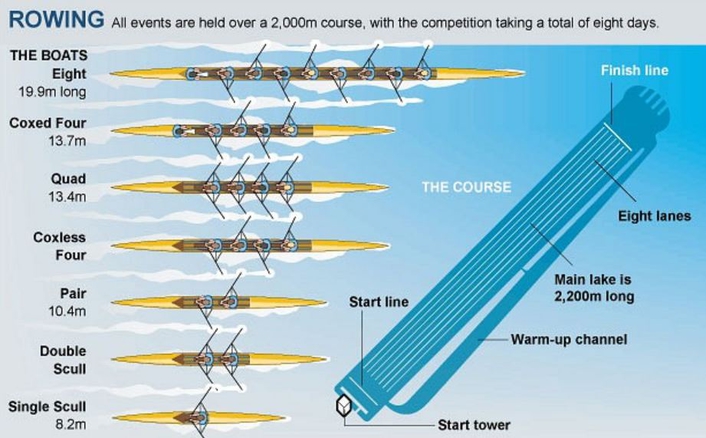 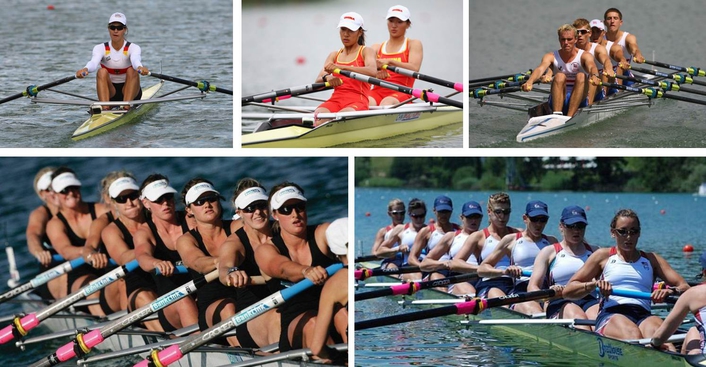 Boats normally try and start off as quickly as they possibly can, then settle into their highest sustainable pace, before sprinting to the end. There’s an advantage in leading from the front because you can keep an eye on your opponents coming up behind you.

Also, before we forget, size does in fact matter in rowing. In 2007 Dr Niels Secher, an exercise scientist at the University of Copenhagen, was able to predict the speed of rowers accurate to one per cent based on their body size and weight of their boat. He found that taller, more muscular rowers (often over 6ft 3in and 15st) with low levels of body fat were able to get more oxygen in their muscles and generate more power.

The Format
Each competing nation may qualify one boat for each of the fourteen events. The majority of qualification places were awarded based on results at the 2011 World Championships, to be held at Lake Bled, Bled, Slovenia in August and September. Places are awarded to National Olympic Committees, not the specific athletes, finishing in the top eleven of men's events and top seven to nine of women's events, except in the eights where the first seven in the men's event and first five in the women's qualify. Further berths are being allocated at three continental qualifying regattas in Africa, Asia and Latin America and a final Olympic qualification regatta in Lucerne, Switzerland.

All Rowing events at London 2012 will begin with the heats, from which the best boats will qualify for the next round. Boats that do not qualify automatically from the heats get a second chance to qualify through the repechage round. The best boats eventually progress through the various stages and into the finals of each event, which decide the medallists.