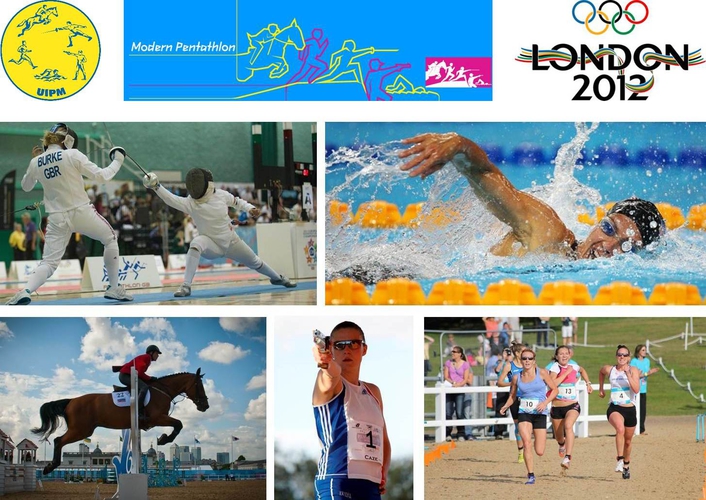 History
A pentathlon is a contest featuring five different events. The name is derived from Greek: combining the words pente (five) and -athlon (competition) (Greek: πένταθλον). The first pentathlon was documented in Ancient Greece and was part of the Ancient Olympic Games. Five events were contested over one day for the Ancient Olympic pentathlon, starting with the long jump, javelin throw, and discus throw, followed by the stadion (a short foot race) and wrestling. Pentathletes were considered to be among the most skilled athletes, and their training was often part of military service—each of the five events in the pentathlon was thought to be useful in war or battle.

The first documented pentathlon occurred in 708 B.C. in Ancient Greece at the Ancient Olympic Games, and was also held at the other Panhellenic Games. The event proved popular and lent itself to illustrations on pottery. It also featured in Greek mythology; the mythical hero Perseus fulfilled an oracle's prophesy by accidentally killing Acrisius with a discus while competing in the pentathlon. In mythology, Jason is credited with inventing the pentathlon, and he declared his friend Peleus the first winner of the event, after his victory in the wrestling. The wide variety of skills needed to compete meant that pentathletes were held in high esteem as physical specimens: in Rhetoric, Aristotle remarked "a body capable of enduring all efforts, either of the racecourse or of bodily strength...This is why the athletes in the pentathlon are most beautiful".

Modern Olympics
The pentathlon made its return as an Olympic event at the 1906 Games in Athens, consisting of a standing long jump, discus throw (ancient style), javelin throw, 192-metre run, and a Greco-Roman wrestling match.

The second type of pentathlon introduced at the 1912 Olympics was the modern pentathlon, a sport invented by Pierre de Coubertin and modeled on the Ancient Olympic ideal of testing skills required by a soldier. Working from the template of a 19th century soldier fighting behind enemy lines, the contest comprises épée fencing, pistol shooting, freestyle swimming, show jumping on horseback, and a cross country run. Competitors score points based on their performance in each event and the winner is the one with the highest total points at the end of the fifth competition.[6] The men's individual competition has been held at every Olympic Games since 1912, and a women's competition was introduced in the 2000 Summer Olympics. Also, a men's team event was held between 1952 and 1992.

Originally the competition took place over four or five days; however in 1996 a one-day format was adopted in an effort to be more audience-friendly.[1] In spite of the event's strong pedigree in the modern Olympics, and its status as the only event created specifically for the modern Olympic Games, its lack of widespread popularity outside Eastern Europe has led to calls for its removal from the Olympic Games in recent years; however, a vote by the IOC on July 8, 2005, keeps it in the Olympic program at least until 2012. 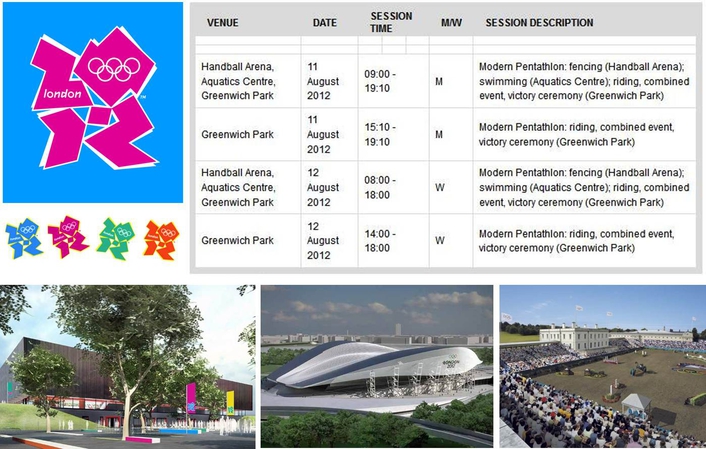 Format
Except for the fencing competition, athletes do not directly compete against one another in the five events. Instead, a better absolute performance results in a higher points score; points for each event are combined to give the overall total scores. This is similar to the procedure for the decathlon in track and field athletics. However, an innovation was introduced to make the finale of the pentathlon more exciting. The last event is the cross-country run. Competitors are ranked according to their score from the first four disciplines and given different start times, with the leader going first, and other starts staggered by points differential such that the first person to cross the finish line will be the overall points leader and win the pentathlon.

The fencing discipline uses the épée. The competition is a round-robin, meaning each competitor will face all the other competitors once. Each match lasts up to one minute; the first fencer to score a hit wins instantly. If neither scores within one minute, both lose the match.

The swimming discipline is a 200 m freestyle race. Until the 2000 Olympics, the distance was 300 meters. Competitors are seeded in heats according to their fastest time over the distance.

The riding discipline involves show jumping over a 350–450 m course with 12 to 15 obstacles. Competitors are paired with horses in a draw 20 minutes before the start of the event.

The running discipline involves a 3 km cross-country race. Until the 2000 Olympics, the distance was 4000 metres.

The shooting discipline involves using a 4.5 mm air pistol in the standing position from 10 metres distance at a stationary target. Until the 2008 rules change, the format was that of the 10 metre air pistol competition: each competitor had 20 shots, with 40 seconds allowed for each shot.

Beginning with the Rancho Mirage World Cup (Feb 2011), the pistols have changed to a laser instead of an actual projectile. There is a slight delay between the trigger pull and the laser firing, simulating the time it would take for a pellet to clear the muzzle.

If it were a TV programme, it would be: Trans World Sport. A jumble of seemingly unrelated sports that nonetheless come together 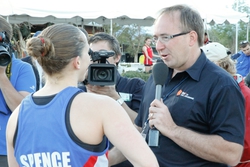 However, whereas biathletes carry their rifles while skiing, pentathletes will not carry their pistols while running. The change has been criticized as altering too radically the nature of the skills required. The New York Times asked whether the name ought to be changed to "tetrathlon" given that two of the five disciplines had been combined into a single event.[1] In the new format, in each of the three rounds of firing, athletes have to shoot five targets, loading the pistol after each shot; they may then resume running. Misses are not penalised, but exceeding a maximum total time of 70 seconds will result in a penalty.

The interruption of the pistol shooting will alter the format of the race, but not the principle that the overall winner will be the first to cross the finish line.