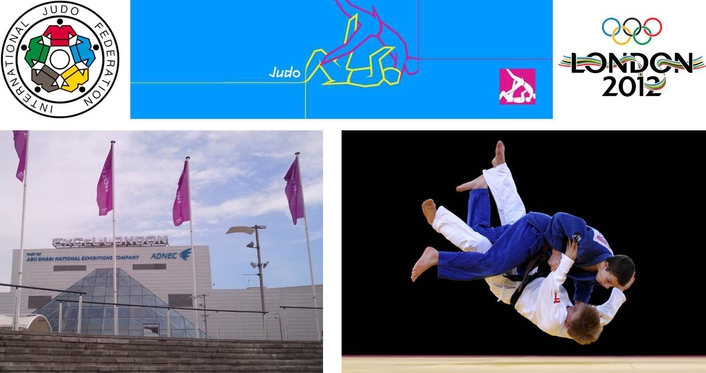 All of the Judo events at the London 2012 Olympic Games – seven for men, seven for women – will be played in a knockout format. The winners of each contest will qualify for the next round, with the two finalists going head to head in the gold medal contest. The defeated quarter-finalists will compete in two 'repechage' contests, the winners of which will then go up against the two defeated semi-finalists to determine the winners of the two bronze medals in each event.

History
Judo came into existence as forms of unarmed combat, which were grouped under the general name "Jujitsu" or "the gentle practice." The object of all these martial arts forms was to avoid an enemy's strength through leverage, speed, and technique. Medieval Japanese warriors practiced many different combat skills. Since Jujitsu was strictly a combat technique, contests were rare and were decided only by the death or crippling of one of the contestants.

When Japanese society began to change structurally in the 1860's, feudal lords no longer retained their private armies; the martial arts, including Jujitsu, began to die out. In the early 1880's, Professor Jigoro Kano, a teacher from Tokyo and an expert in many types of Jujitsu, decided to save some of these ancient arts. He modified or eliminated the most dangerous of the Jujitsu techniques and created a new discipline, which he called "Judo" or "the gentle way." 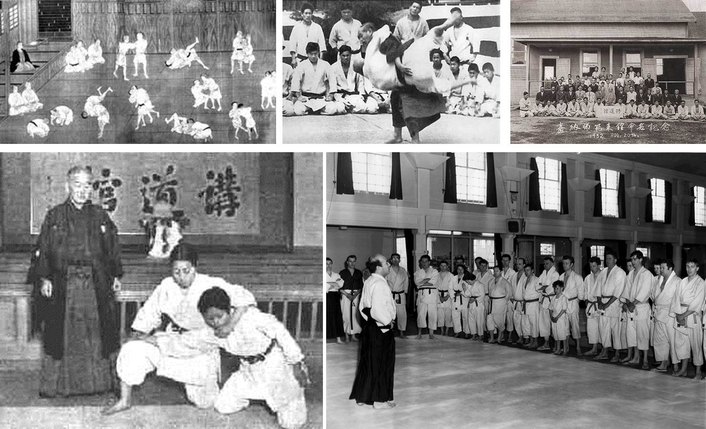 Judo is "the gentle way" because the end result is maximum efficiency with minimum effort. As a sport, rather than simply a combat form, Judo includes a code of sportsmanship, a sense of mutual respect, and a system of ethical and moral development. Judo is both an art and a science. As an art, Judo enables its practitioners to gain self-respect, self-confidence, and self-expression; as a science, it involves a mastery of such basic natural laws as gravity, friction, momentum, weight transmission, and unity of forces.

From its simple beginnings in nineteenth-century Japan, Judo has spread in popularity throughout the world. Its rich, medieval heritage combined with Professor Kano's modern, scientific approach has made Judo into the exciting sport it is today. Now the most popular martial art in the world, judo attracts 13 million participants in 111 countries.

Judo made its first appearance as a medal sport at the Olympic Games at Tokyo in 1964. A women’s competition was eventually added to the Olympic programme at Barcelona in 1992.

However, since 1972 it has become a regular fixture with Japan, somewhat unsurprisingly, dominating with 65 medals - 28 more than second-placed France.

The Basics
Judo means ‘the gentle way’ and reflects a moral code which demands politeness, courage, self-control and respect, yet the five-minute bouts (four minutes for women) can be as physically demanding as boxing and wrestling. Scores are awarded for different throws and holds.

However, a contest ends immediately if a competitor is awarded ‘ippon’ – the maximum score. If the scores are tied after five minutes, the contest enters a golden score period, when the first score of any sort wins. 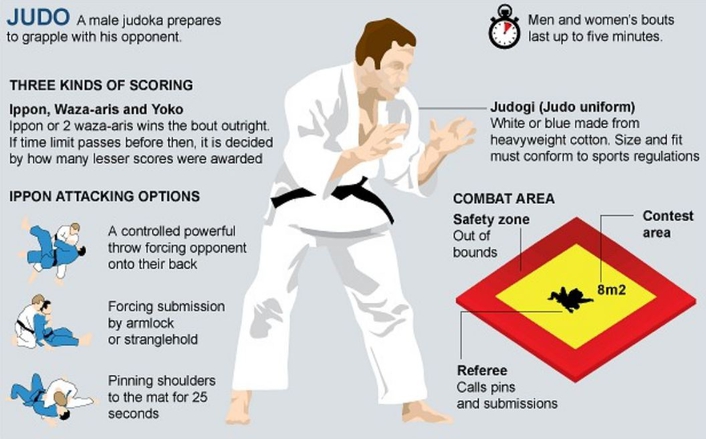 Although strength and power are important, possessing the mental agility to quickly spot and exploit your opponent’s weakness is even more so. Traditional judo masters teach their pupils to empty their minds and become like a mirror, so that their opponent’s impulse to attack is reflected straight away in their mind and defence begins simultaneously.

Strangely, one of the first things you need to learn in judo is how to fall. This is so when your opponent throws you to the ground, you are able to land safely.

The Format
Fights take place on a mat 8m x 8m in size, known as a ‘tatami’. Contests last five minutes and, if a competitor- judoka - manages to throw their opponent to the ground on their shoulder, to pin them to the ground on their back, or force them to submit to a choke, strangle or an arm-lock, they immediately score ‘ippon’- maximum score- and win the bout. Smaller scores are awarded for other kinds of throws and holds.

Fighters compete in events determined by their weight, and at London 2012 there will be seven weight classes for men and seven for women.

The tournament will follow a knock-out format. The winners of each contest will qualify for the next round, with the two finalists going head to head in the gold medal contest.

The defeated quarter-finalists will compete in two 'repechage' contests, the winners of which will then go up against the two defeated semi-finalists to determine the winners of the two bronze medals in each event.

The world ranking list, prepared by governing body, the IJF, in May 2012, is all important. For the men’s events, the top 22 athletes in each weight category qualify. For women, it’s the top 14.

But it is not as simple as it sounds. Each nation can field only one judoka in each event, so if they have more than one athlete in the top 22 (or 14) they must decide who they want to compete, and the others are excluded. The search goes on until 22 (or 14) countries are represented.