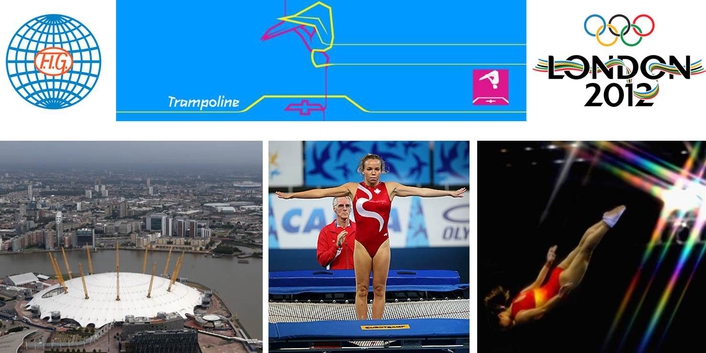 The London 2012 Gymnastics Rhythmic Competion will be held at the North Greenwich Arena
Prepare to be dazzled by the athletes in the Trampoline competition at the London 2012 Games, the newest of the three Gymnastics disciplines to have arrived on the Olympic programme.

Since making its Olympic debut at the Sydney Games in 2000, the sport has consistently featured awe-inspiring displays of acrobatic excellence, with athletes springing to heights of up to 10m.

History
The Eskimos who used to toss one another into the air with a Walrus skin originated the first type of trampolining some have said. Almost like the giant sheet that firemen would use to catch people jumping out of a burning building. There is some evidence of people being tossed in the air by a number of people holding a blanket in England. While these origins may or may not be the true beginnings of trampolining it is certain that at the start of the 20th century there were stage acts that used a "bouncing bed" to amuse audiences in comedy routines. The bouncing bed was some form of a small trampoline covered with bedclothes that acrobats used to perform their shows.

George Nissen and Larry Griswold built the first modern trampoline sometime during 1934. Both men attended the University of Iowa. Nissen was a gymnastics and diving competitor; Griswold was a tumbler on the gymnastics team. Both observed trapeze artists using a tight net to add more value to their performances. The two experimented by taking a piece of canvas and stretching it to an angle iron frame by means of coiled springs. Initially this invention was used to train tumblers but soon became popular in it's own right. During the late 1930s, George Nissan took a demonstration tour in Mexico and heard the word trampolin meaning diving board. In 1942 the Griswold-Nissen Trampoline & Tumbling Company was created and began making trampolines commercially in Cedar Rapids, Iowa.

During World War II the industry grew rapidly when trampolines became an integral part of a physical training program to train aerial awareness to pilots and navigators giving them practice in orientation that had never been possible before. Trampoline training was one of twelve activities selected by the Navy to add to the aims and purposes of the Naval Aviation training. Trampolining and other sports embodied in the program would contribute to the mental and physical conditioning for an aviation cadet.

Also during the development of the space flight program, NASA used trampolines to help train American astronauts educating them with the experience of the variable body positions used in space flight.

The sensation of bouncing up and down proved such a hit that trampolining became a popular sporting discipline in its own right, beginning in the United States before spreading to Europe. In 1964, the first ever Trampoline World Championships were held at the Royal Albert Hall in London.  It was finally admitted to the Olympic fold at the 2000 Games in Sydney, with competitions for men and women.

The Basics
Athletes should fly effortlessly through the air, but maintain total control over their bodies at the same time. Their routine will consist of combinations of 10 contacts with the trampoline, landing in one of four positions: feet, seat (sitting down), front (lying face down) and back (landing on your shoulders). 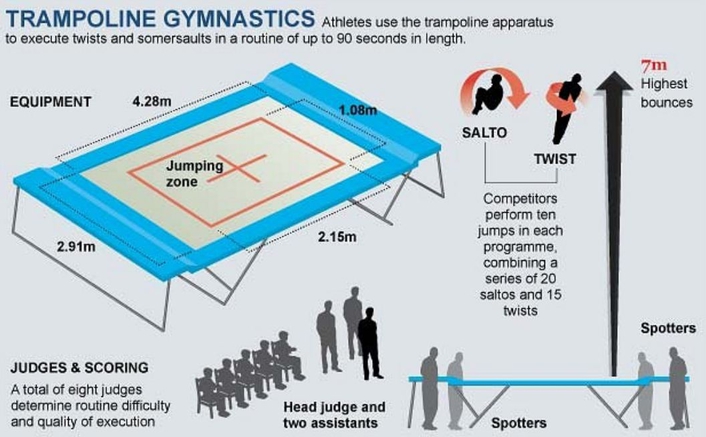 In the air they will attempt to hit certain positions, with core strength employed to ensure perfect outlines. Moves should be breathtakingly acrobatic and athletes should try to reach heights of about 10m.

At the end of the performance, the trampolinist should finish in an upright position with both feet on the trampoline bed. They must stop the bed moving completely and hold this still position for three seconds before moving.

The trampolines used at the Games will be 5.05 metres long, 2.91m wide and 1.155m high. The spring ‘bed’ is made from nylon or string material and is only about 6mm thick.

The Format
Athletes produce short routines on trampolines, containing a variety of twists, bounces and somersaults. Marks are awarded for difficulty, execution and flight time.

Marks are awarded by a panel of nine judges. Five award points for execution, two score the degree of difficulty and two oversee the contest. The highest and lowest execution scores are dropped and the three remaining scores are added to the single difficulty rating.

The best eight scorers from the qualification round advance to the final round and perform another optional routine and the athlete with the highest score wins overall.