The London 2012 Gymnastics Rhythmic Competion will be held at the Wembley Arena
During the London 2012 Olympic Games, grace and beauty will be on show throughout the four days of Rhythmic Gymnastics competition at Wembley Arena. As with synchronised swimming, it is open only to women and has been part of the Olympic programme since the 1984 Los Angeles Games.

Competitive rhythmic gymnastics, with all its grace and elegance, first started in the Soviet Union during the 1940s. Unsurprisingly then, the Russians are the dominate force in the sport having won gold in the last three games.

History
Rhythmic gymnastics took a while to gain traction as a respected sport. That said, the seeds were planted hundreds of years ago. The basis of the idea back then is similar to what it is today, which was that someone should be able to express themselves through movement, and that movement should be recognized and appreciated as sport.

This idea was first thought of, or at least first publicized, in the late 1700s by I.G. Noverre. He didn’t have an opportunity to take it to the level he would have liked, but did create enough momentum for Francois Delsarte and R. Bode to gain even more traction in the mid 1800s. In 1837, Catherine Beecher also founded the Western Female Institute in Ohio. Her entire concept and slogan was ‘grace without dancing.’ It was a slogan that caught on much more than she possibly could have imagined.

Women from all over began to exercise to music. A few decades later, the Swedish School of Rhythmic Gymnastics continued the momentum of the idea of rhythmic gymnastics. Finally, competitions for rhythmic gymnastics were held in the Soviet Union in the 1940s. In 1961, the Federation International of Gymnastics recognized the sport in 1961. It only took two more years for a World Championship to be held in Budapest. In 1984, it became a part of the Summer Olympics. Lori Fung, a Canadian, was the first to win a gold medal. Group competitions were introduced in the 1996 games in Atlanta. 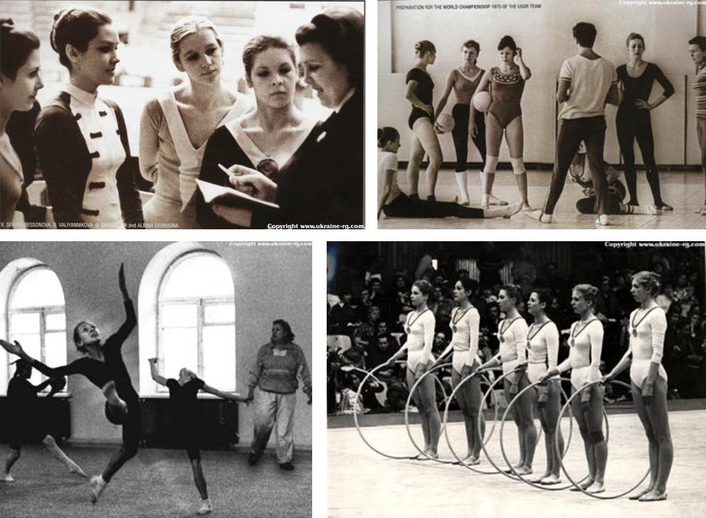 Having evolved to incorporate elements from classical ballet, German muscle-building techniques and Swedish exercise systems, it’s one of the most beautiful spectacles on the Olympic programme.

The Basics
Rhythmic gymnastics is usually only performed by women, but it is growing amongst men in certain countries. The sport is a combination of ballet, gymnastics, theatrical dance, and apparatus manipulation. It can be performed by one, two, three, four, or five people, but is often five. The objective is to manipulate one or two items. These items can be a ball, a ribbon, clubs, a rope, or a hoop.

For the London Olympics the world governing body has decided to phase out the rope as a permitted piece of apparatus, leaving just the ball, hoop, clubs and ribbon. This has caused plenty of controversy internationally.

The top 15 individual gymnasts from the 2012 World Championships in Montpellier will qualify for the Games. They will be joined by five more, who will be added based on the results of the January 2012 Olympics test event. 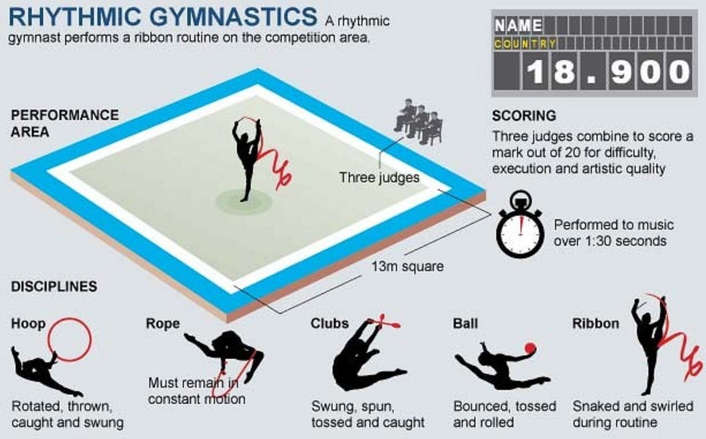 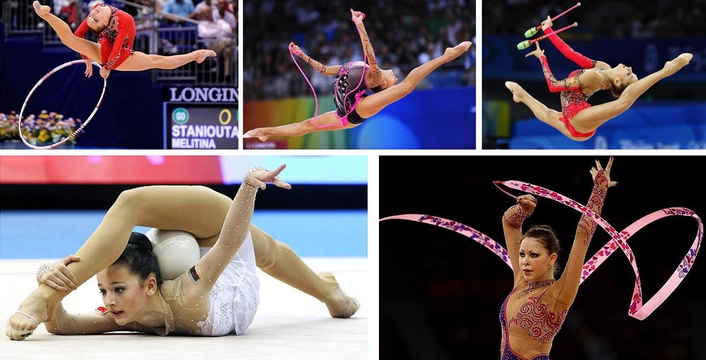 Qualification for the groups began in 2010, where the top 24 teams at the Worlds in Moscow earned a place at Montpellier. The top four will be granted tickets to the Olympics, and the remaining teams will fight it out for four last-minute spots in January 2012.

Individuals are allowed to use only one apparatus at a time and must perform four separate routines using four of the five apparatus. Gymnasts compete in a preliminary round, with the top 10 progressing to the final. The finalists begin with a clean slate.

In the group competition, teams perform two exercises. In the first, the team members use identical pieces of apparatus and in the second exercise a combination of two different pieces of apparatus. The top eight teams from the preliminary round progress to the final.

The Format
To score highly gymnasts must show high standards of balance, flexibility, coordination and strength as well as artist dance moves that are timed to perfection.

The gymnasts compete on a carpeted surface measure 13 by 13 metres and are expected to use the entire area when performing, so spacial awareness is key. Stepping beyond the boundaries of the floor area incurs a penalty.

During the exercise, the apparatus must be in constant motion, using movements that show variety of shape, amplitude, direction, plane and speed. The apparatus must be handled with as much variety as possible. It should not be used simply as a decoration.

Scoring for rhythmic gymnastics is based on points and is determined by a judge’s panel. The scoring can be based on artistic effect, apparatus handling, flexibility, leaps, balances, and pivots. While the Federation International of Gymnastics changed the scoring system several times in the 2000s in an effort to get away from subjectivity and more toward the technical aspect, it’s highly unlikely that that will change the judges’ minds away from the performances they like best anyway. But it is a step in the right direction. The scoring system is on a thirty point scale. 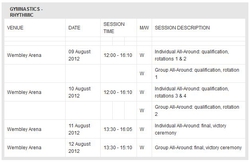 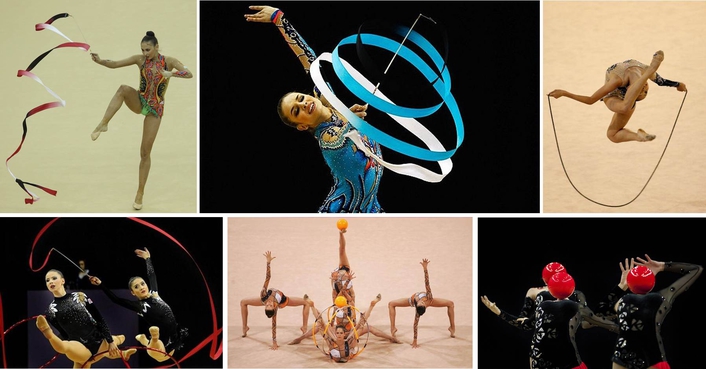