The grace, strength and skill of Olympic gymnasts have been astonishing audiences since the Games in Ancient Greece, where Gymnastics was regarded as the perfect symmetry between mind and body. The best known of the three Gymnastics disciplines, Artistic Gymnastics is always among the most popular competitions at the Games.

History
The history of gymnastics is closely related to the ancient Olympic Games, but a thousand years before then (2700 B.C. - 1400 B.C.) King Minos and his contemporarie speers had already given their royal approval and seal to physical exercises.

Gymnastics is one of the oldest Olympic sports, and was first practised at the ancient Olympic Games when the competitors performed a variety of events that could loosely be termed as 'gymnastics'. These included wrestling and vaulting over bulls, according to illustrations seen on ancient clay pots. In fact, the name 'gymnastics' is derived from the ancient Greek word 'gumnos' which literally translated means naked. Because of this, women were excluded from the ancient Games, not just as competitors but also as spectators!

The sport in its modern form first evolved during the 19th century, when two styles of gymnastics were in conflict : the Swedish system (mainly freestyle group exercises) and the German system (using apparatus).

Large open air gymnasiums began to appear in Europe during the 19th century, resembling adventure playgrounds where gentlemen could impress their lady friends with a spot of rope-climbing. It was regarded as a great form of discipline by the army, and many military terms still exist today, such as 'marching on' and 'saluting the judges'.

The first Olympic gymnastics competition in Athens took place affiliated and involved 18 gymnasts from five nations. Only voluntary routines on six apparatus were performed - high bar, parallel bars, pommel horse, rings, vault and rope climbing. Only Gold and Silvergold and silver medals were awarded and German gymnasts, many of whom also competed in other sports, such as athletics and wrestling, won the majority of them. 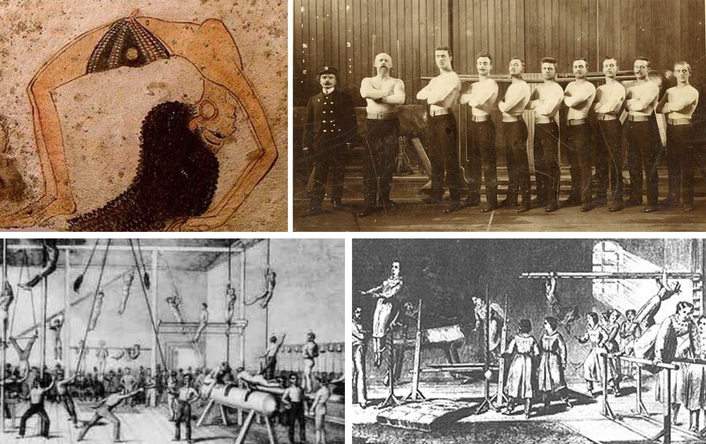 The term ‘Artistic Gymnastics’ was first used in the 19th century. Between its appearance at the Athens 1896 Games and the 1920s, the event evolved into what we recognise as modern Gymnastics. The men’s individual apparatus and team competitions first appeared at the Paris 1924 Games; a women’s team event was introduced in 1928, with women’s individual apparatus competitions added in 1952.

Part of the Olympic programme since the first modern Games of 1896, gymnastics has its roots in the exhibitions of agility, strength and grace that used to thrill audiences at the ancient Games in Greece.

Changes were gradually made at each Olympic competition: - to the number of apparatus used, to the number of gymnasts per team and to the quality of the routines. However, the era of discipline-specific Gymnastics was fixed in 1952 at Helsinki.

The sport is now one of the most high-profile disciplines of the Olympics and owes much of its popularity to the headline-grabbing brilliance of the Soviet Union’s Olga Korbut and Romania’s Nadia Comaneci in the 1970s.

Korbut became a global star when she won three gold medals at the 1972 Munich Games while, in Montreal four years later, Comaneci became the first gymnast to receive a perfect score of 10 marks for her performance on the uneven bars – at the age of just 14. In two Games, 1976 and 1980, Comaneci won a total of five gold medals, three silvers and a bronze.

The international governing body for Gymnastics, the Fédération Internationale de Gymnastique (FIG) was founded in 1881 in Liège (BEL). There are currently 129 federations affiliated to the FIG and 1 associated federation.

The Basics
Along with events to find the best teams and the best all-around performers, gymnasts will be battling for gold on individual apparatus. Men compete on the floor, pommel horse, rings, vault, parallel bars and horizontal bar, while women compete on the vault, uneven bars, balance beam and floor. 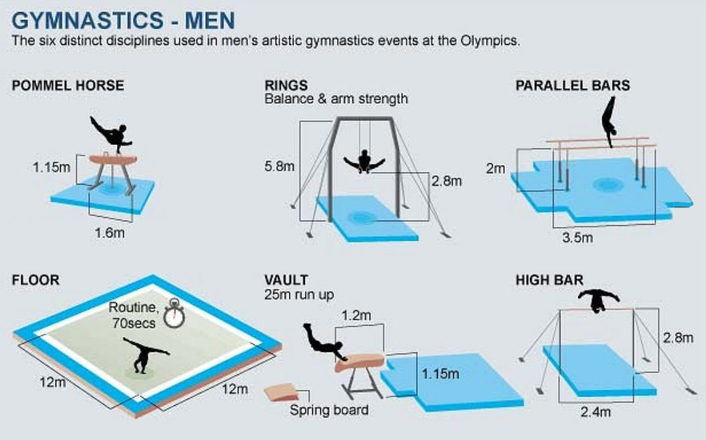 Scores are given by a panel of judges, taking into account the degree of difficulty and the quality of the execution. Strength, skill, extreme flexibility, perfect balance, intuitive spacial awareness and a high pain threshold are essential. On top of this, grace, artistry and the ability to make it all look easy are needed to gain the top marks with the judges.

Female gymnasts tend to be petite and slim, while men are short and muscular. But taller gymnasts, such as Svetlana Khorkina and Nastia Liukin, although more unusual, have in the past provided some of the most memorable performances. 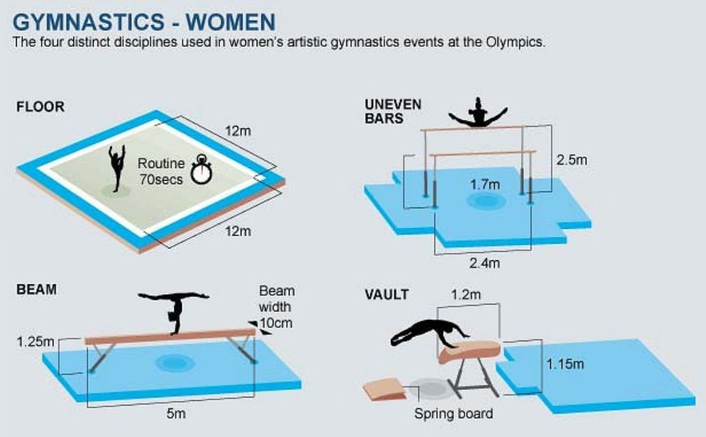 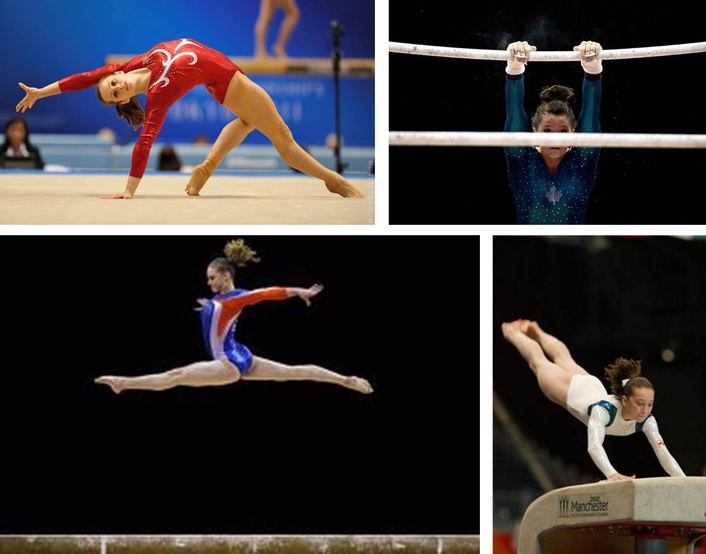 The minimum age for gymnasts has since been raised (it was finally raised to 16 in 1997) but the range of apparatus on which gymnasts must perform remains unchanged.

The Format
The first competition to be contested is the team event, which doubles as the qualification round for the individual and all-around contests.

The days of scoring a perfect 10 are long gone after the scoring system was given a radical overhaul by the sport’s world governing body in 2006.

Gymnasts’ performances are now rated by two judging panels. One group of judges scores the degree of difficulty, or ‘start value’, of the routine and the other scores its execution, composition and artistry. Instead of maximum 10s, the medal-winning scores tend to be in the high 15s, 16s and 17s. 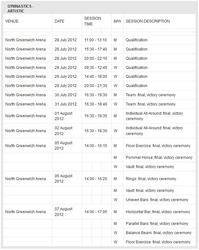 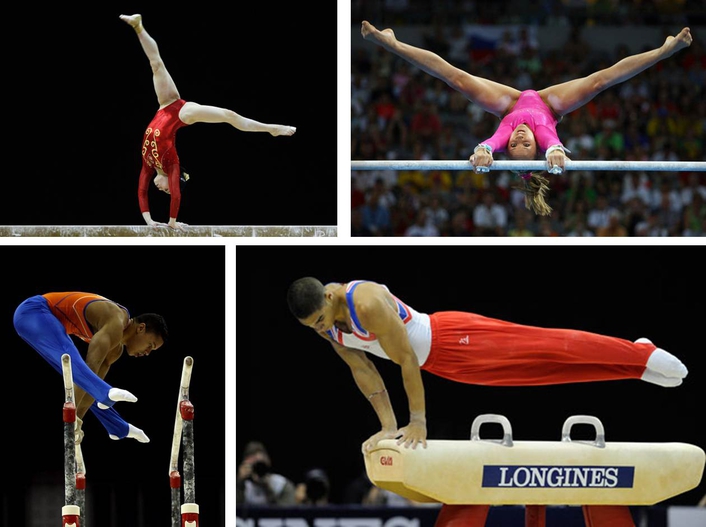