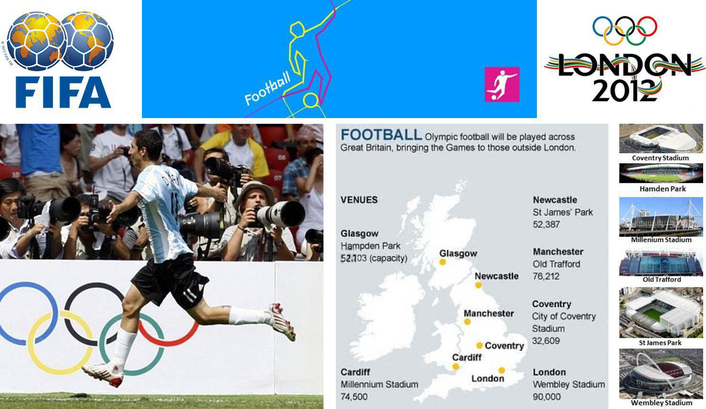 The London 2012 Fencing Competion will be stages at six grounds around the UK
Football will be a major feature of the Olympic programme at London 2012. Beginning with group matches and ending with a knockout phase, the competition will offer all the drama that fans have come to expect from major international tournaments. There will be two medal events at London 2012, one for men’s teams and one for women.

The Football competition at London 2012 will be staged at six grounds around the UK, including venues in Wales (Cardiff’s Millennium Stadium) and Scotland (Hampden Park in Glasgow). The finals will take place at Wembley Stadium in London.

History
Aptly enough, football became a full Olympic medal sport at the London Games of 1908, having been a mere demonstration for the first modern Olympiad, in Athens in 1896. Great Britain won the gold medal in 1908, then successfully defended their title four years later in Stockholm. The sport has featured at every Olympic Games since, with the exception of Los Angeles 1932.Football itself, of course, had far longer lineage, with even the ancient Greeks known to have played a variation of the game.

The breakthrough for its Olympic profile came at Barcelona ’92, with professional players permitted to take part in the Games for the first time.

The Basics
The aim of Football, to score more goals than the opposition, is both simple and universally known. Teams of 11 players compete across two 45-minutes halves, with extra time and penalty shootouts used to decide drawn matches during the knockout stages of the competition.

Due to the intense schedule, the Football competition actually kicks off two days before the Olympic Games Opening Ceremony with the first group matches. At London 2012, the men’s competition will be an under-23s event, although each country will be allowed to include three older players in their team. There are no age restrictions for the women’s competition. 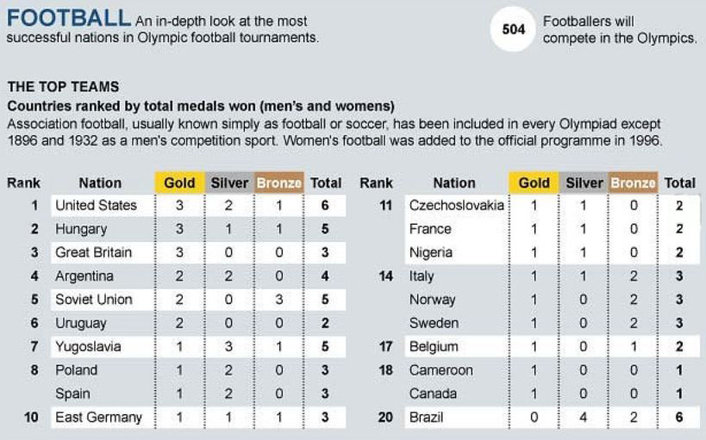 Both the men’s and women’s competitions will begin with a group stage. The teams will be divided into groups of four (three groups in the women’s tournament, four groups for the men), and the best eight teams will qualify for the quarter-finals. From here, the competitions are played to a knockout format: the two winning semi-finalists will play for the gold medal at Wembley, with the two losing semi-finalists facing off for the bronze.

The Format
Two teams of 11 players on an outdoor pitch seek to put the ball in the others’ net, and the team with the most goals after 90 minutes wins. Straightforward enough? Well, there is the complication of the offside rule, which these days some of the game’s best commentators may even struggle to define. The phrase ‘interfering with play’ has joined the argument over ‘goal-mouth technology’ as a weekly debating point, but the essence of football remains unchanged.

The days of the rigid 4-4-2 have long gone, with football tactics evolving into something more complex with positions like the "false number nine" (made famous by Argentina's Lionel Messi) and the "Claude Makelele role" changing the way the game is played.

Whether it is Spain's philosophy of short, sharp passing, or Italy's love of defensive stability, there is no one tactic that guarantees success.

The key to the men’s tournament may lie in the choice of the three over-23 players. Those experienced pros will be expected to guide their younger teammates through the competition drawing on their tournament knowledge. Pick well and the balance of youth and experience may lead to gold medal success.