Although sword fighting dates back thousands of years, Fencing as we now understand it really came of age as a sport in the 19th century. A tense, compelling battle of wits and technique, the sport is one of the few to have featured at every modern Olympic Games.

History
The history of fencing parallels the evolution of civilization, back from the days of ancient Egypt and Rome, to the barbaric Dark Ages, to the fast and elegant Rennassiance, up to the modern, increasingly popular fencing of today. Fencing has always been regarded as more than a sport; it is an art form, an ancient symbol of power and glory, and a deeply personal, individual form of expression. Fencing is and always has been an intrinsic part of life, from the dueling and battle of yore to the widely captivating movies and facets of popular culture such as Zorro and The Princess Bride.

The earliest evidence of fencing as a sport comes from a carving in Egypt, dating back to about 1200 B.C., which shows a sport fencing bout with masks, protective weapon tips, and judges.

The fifteenth century brought the beginnings of modern fencing. Spain had the first true fencers, and the first two fencing manuals were published there in 1471 and 1474, but swordplay guilds such as the Marxbruder from Germany began springing up all across Europe. About 1500 the Italians began extensive use of the Rapier. The right hand held the weapon while the left hand held a dagger (often called a Main Gauche) or buckler (a small shield), used for parrying blows. Italian fencing masters, such as Agrippa, who invented the four fencing positions (prime, seconde, tierce, and quarte), and masters Grassi and Vigiani, who invented the lunge, became very prolific in this time. The 16th century also brought a large increase in the popularity of dueling. More noblemen during this period were killed in dueling than in war. 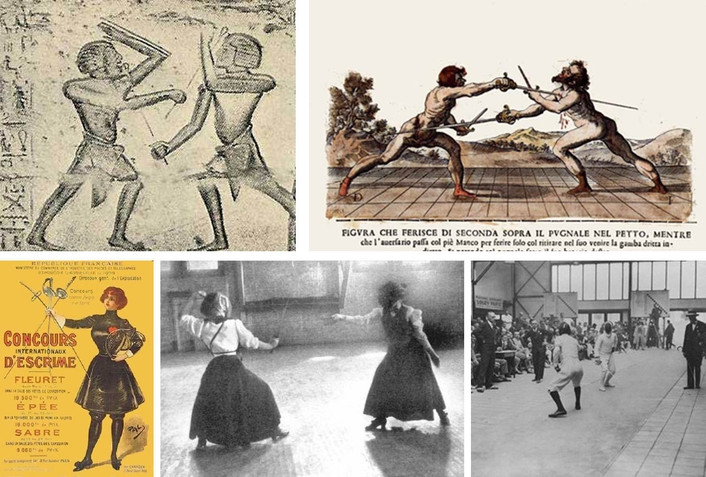 1780 brought an extremely important development to fencing. The French fencing master La Boessiere invented the fencing mask, allowing a much safer bout. This sparked a lot of development in non-fatal technique and strategy.

At the first modern Olympic Games of 1896, the Fencing programme consisted of men’s Foil and Sabre events, with the Epée making its debut at Paris 1900. Women’s Fencing first featured at the 1924 Games but it was not until 1996 that Women’s Épeé joined.

At the beginning of the 20th century French, Italians, and Hungarians were the masters of the sport, and thus it is no suprise that the International Fencing Federation (FIE) was founded in France. The French, Italians and Hungarians maintained their grip on the sport until the 1950’s, when eastern European countries such as the Soviet Union and Romania came to the fore. Their style emphasized speed and mobility, relying on touches that before would have gone undetected, but now were seen with the recently invented electric scoring machines.

The Basics
Three types of weapon are used in Olympic Fencing. In bouts using the Foil and the slightly heavier Epée, hits are scored by hitting an opponent with the tip of the weapon. However, in Sabre, hits may also be scored with the edge of the weapon. Epée allows both fencers to score at the same time while Foil and Sabre have rules of right of way and timing that mean only one fencer can score a hit at a time. 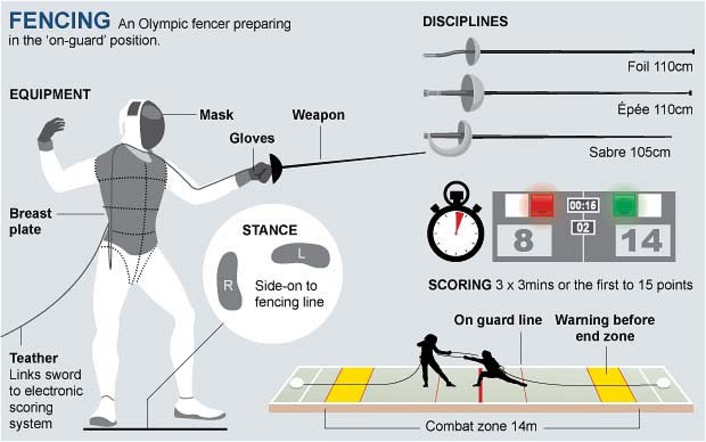 All 10 medal events on the Fencing programme will be run in a knockout format. Players and teams will progress through the draw until the finals, which will decide the winners of the gold medals.

Fencing at the Olympics does not have a seeding round, unlike the World Cup and Grand Prix series. Fencers are seeded from their world ranking and zonal qualifiers and begin with direct elimination fights.

The Format
Fencers must salute each other before they start. If they don’t, they can be disqualified.

There are ‘rights of way’ rules in foil and sabre fencing, to encourage sensible and strategic fencing, as opposed to random poking. These are complicated and often controversial, but the fencer making an ‘attack’ – by effectively extending their arm first – wins right of way, so will earn the touch if they hit first, unless that hit is parried or countered by the opponent or misses the target. 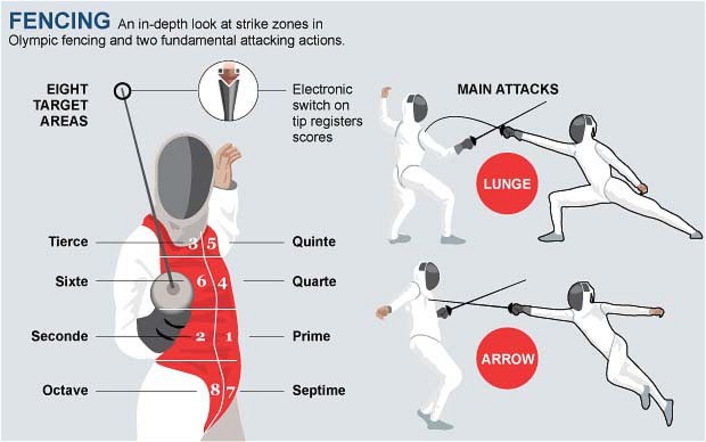 Each contest pits two fencers against each other in an often mesmerising duel, a dancing combat befitting a theatrical production. In view of a referee but also using electronic equipment to measure scoring, the combatants wear protective clothing, including a wire mesh face mask that has to pass a 12kg punch test.

Points are scored by touching or ‘hitting’ opponents with the tip or blade of the sword, which is wired to a buzzer that sounds to indicate contact, on a valid target area; in the foil, this is the trunk of the body, in the sabre everything above the waist, excluding hands, and in epee the entire body is legal. Coloured lights on the electrical scoring apparatus register valid hits, while white lights register hits landing outside the valid target area.

Matches consist of three three-minute bouts. The first fencer to post 15 touches, or the one with most hits after three rounds, is declared the winner. 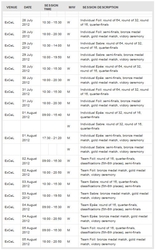