The Londo 2012 Equestrian events of Jumping will take place in Greenwich Park
At the London 2012 Olympic Games, the Jumping competition will require horse and rider to navigate a short course with precision, speed and perfect technique. Entry to the various Olympic Equestrian competitions was originally limited to members of the military. However, at the Helsinki Games of 1952, the competition was broadened to include civilian riders.

Along with the other Equestrian events at London 2012, the Jumping competition will be held in the beautiful surroundings of Greenwich Park. Dating back to 1433, it is the oldest Royal Park in London, part of the Maritime Greenwich area that has been designated as a World Heritage Site by UNESCO.

History
Jumping is a relatively new equestrian sport. Until the Inclosure Acts, which came into force in England in the 18th century, there had been little need for horses to jump fences routinely, but with this act of Parliament came new challenges for those who followed fox hounds. The Inclosure Acts brought fencing and boundaries to many parts of the country as common ground was dispersed amongst wealthy landowners. This meant that those wishing to pursue their sport now needed horses that were capable of jumping these obstacles.

In the early horse shows held in France, there was a parade of competitors who then took off across country for the jumping. This sport was, however, not popular with spectators as they could not follow to watch the jumping. Thus, it was not long before fences began to appear in an arena for the competitions. This became known as Lepping. 1869 was the year ‘horse leaping’ came to prominence at Dublin horse show. Fifteen years later, Lepping competitions were brought to Britain and by 1900 most of the more important shows had Lepping classes. Separate classes were held for women riding sidesaddle.

At this time, the principal cavalry schools of Europe at Pinerolo and Tor-di-Quinto in Italy, the French school in Saumur, and the Spanish school in Vienna all preferred to use a very deep seat with long stirrups when jumping. While this style of riding may have felt more secure for the rider, it also impeded the freedom of the horse to use its body to the extent needed to clear large obstacles. 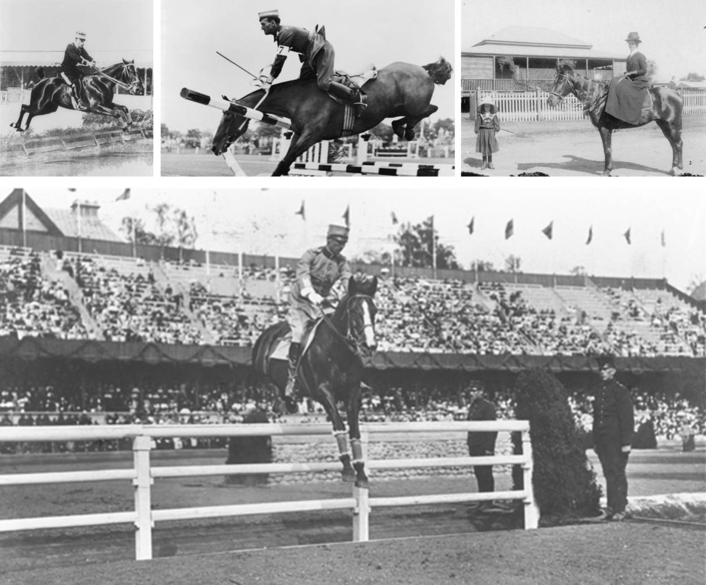 An Italian riding instructor, Captain Federico Caprilli, heavily influenced the world of jumping with his ideas promoting a forward position with shorter stirrups. This style placed the rider in a position that did not interfere with the balance of the horse while negotiating obstacles. This style, now known as the forward seat, is commonly used today. The deep, Dressage-style seat, while useful for riding on the flat and in conditions where control of the horse is of greater importance than freedom of movement, is less suitable for jumping.

The first major show jumping competition held in England was at Olympia in 1908. Most of the competitors were members of the military and it became clear at this competition and in the subsequent years, that there was no uniformity of rules for the sport. Judges marked on their own opinions. Some marked according to the severity of the obstacle and others marked according to style. Before 1907 there were no penalties for a refusal and the competitor was sometimes asked to miss the fence to please the spectators. The first courses were built with little imagination; many consisting of only a straight bar fence and a water jump. A meeting was arranged in 1923 which led to the formation of the BSJA in 1925. In the United States, a similar need for national rules for jumping and other equestrian activities led to the formation of the American Horse Shows Association in 1917, which now is known as the United States Equestrian Federation.

An early form of jumping first was incorporated into the Olympic Games in 1900. Show jumping in its current format appeared in 1912, and has thrived ever since, its recent popularity due in part to its suitability as a spectator sport which is well adapted for viewing on television.

The Basics
The Jumping competition is a tense, exciting test of skill, speed and power. Held in an arena around a short course containing 12-14 fences, the event requires huge reserves of boldness, accuracy and nerves of steel – from both the riders and their horses. As with all three Equestrian disciplines on the Olympic programme, the competition features both Individual and Team events, and men and women compete against each other on equal terms. 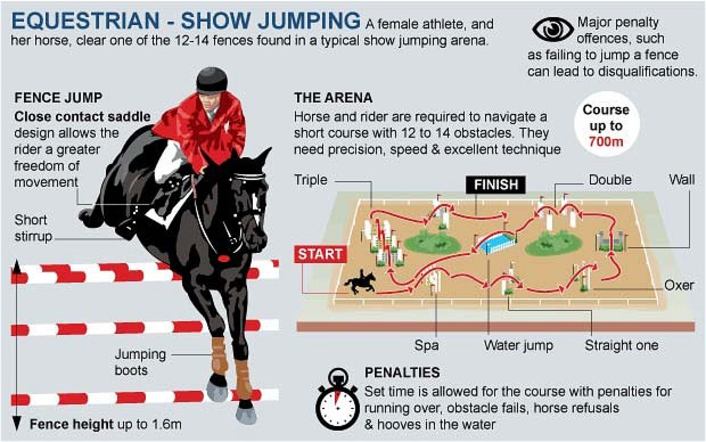 There are a total of five rounds in the Jumping competition. Two of these rounds are used to determine the placings in the Team event, with all five rounds playing a part in the Individual event. Riders who hit the fences are penalised with ‘faults’. Time faults (one per second) are also awarded if the rider does not complete the course within a set time. The winner is the rider with the fewest faults over the two final rounds.

If two or more rider/horse combinations are tied for medal places after the fifth and final round of the Individual event, there will be a jump-off to break the tie.

The Format
Jumping relies on the accuracy and discipline of the rider as much as the athleticism of the horse. To avoid knocking down the fences, the rider must calculate the best approach possible to each obstacle. Turns, paces and strides all come into play as the rider seeks to put their horse in the perfect position to clear the fence.

There are two show jumping events at the Games - the team and individual competitions - featuring 75 athletes in total. Qualification for 2012 depends on geography, with world governing body the FEI dividing the planet into seven areas.

Next to qualify will be the three best teams from both the 2011 European Jumping Championships (in Windsor, UK, in August) and the 2011 Pan-American Games. The best African or Middle Eastern team, once results from the World Equestrian Games and a 2011 Qualifying Tournament have been combined, will also go through.

One further place remains for the best team from the same area at the aforementioned 2011 Qualifying Tournament. This, plus a place for Britain as the hosts, provides the Olympics with a 15-team tournament.

Members of the qualified teams automatically gain entry to the individual event, with 15 more places reserved for individuals who do not reach the Olympics as part of a team. Five of those places, for athletes from Europe and Central Asia, are decided according to show jumping's world rankings as of 1 March 2012.

Five more are offered to the countries producing the best-ranked athletes at the 2011 Pan-American Games (who have not otherwise qualified), with three additional places - from Africa, the Middle East, South-East Asia and Oceania - settled according to performances at the 2010 World Equestrian Games.

Finally, two more individuals from Africa, the Middle East, South-East Asia and Oceania will qualify at a separate Olympic Qualification event.Importantly, the 15 additional places for individuals not qualified as part of teams are awarded not to the athletes who earn them, but the countries they represent. Nations can award their place(s) to other competitors from the same country if they wish.

Athletes compete as individuals, with the top three athlete/horse combination scores after the first two rounds of competition, contributing towards the teams’ medals. There are five rounds of competition, with all rounds counting towards individual medals.  The number of ‘penalties’ determines whether an athlete progresses through to the next round. If at the end of the fifth and final round there are two or more athlete/horse combinations that are tied for medals, there will be a final jump-off to break the tie.