The Londo 2012 Equestrian events of Dressage will take place in Greenwich Park
At the London 2012 Olympic Games, the Dressage events will test the ability of horse and rider to display both athletic prowess and supreme elegance. Along with the other Equestrian events at London 2012, the Dressage competition takes place over four days in the temporary Arena. There will be 50 competitors in team and individual events.

Greenwich Park is London’s oldest Royal Park, dating back to 1433. It has been a World Heritage Site since 1997. Within the Park is The Royal Observatory and the home of Greenwich Mean Time.

History
Equestrian sport can be traced back more than 2,000 years, when the Greeks introduced dressage training to prepare their horses for war. Classical dressage reached its peak with the development of the Spanish Riding School in Vienna, which laid the basis for the elegant, graceful sport practised today.

Equestrian events were first held at the 1900 Paris Olympic Games, although it did not include any of the disciplines seen today. There were 4 different equestrian events: The polo competition consisted of 4 teams made up of players from Britain, France, Mexico, Spain, and the United States. Grand Prix Jumping, which was similar to today's show jumping event, for which 45 competitors entered, though only 37 competed. In addition there were a High Jump and a Long Jump competition.

Equestrian competition was dropped from the 1904 Olympic Games, and owed its return to Count Clarence von Rosen, Master of the Horse to the King of Sweden, for bringing it back. The 1906 IOC Congress agreed to his proposal to add dressage, eventing, and show jumping to the program of the upcoming 1908 Olympic Games in London. However, due to problems with the newly-formed International Horse Show Committee, they were not introduced until the 1912 Games in Stockholm. These three disciplines would be held at every Summer Olympic Games through to the present day.

Until the 1952 Summer Olympics, only commissioned military officers were permitted to compete in the Olympic equestrian disciplines, which also had the effect of making Olympic equestrianism a men's-only sport. In 1951, however, Olympic equestrianism was not only opened to civilian riders, but also became one of the very few Olympic sports in which men and women compete with and directly against one another. In team competition, teams may have any blend of male and female competitors, and are not required to have minimum numbers of either gender; countries are free to choose the best riders, irrespective of gender.

The Basics
In modern Dressage competitions, the horse and rider perform a series of movements known as a Dressage test. The tests are performed in a 60m x 20m arena before a panel of seven judges, who award scores for individual movements and for the overall routine. 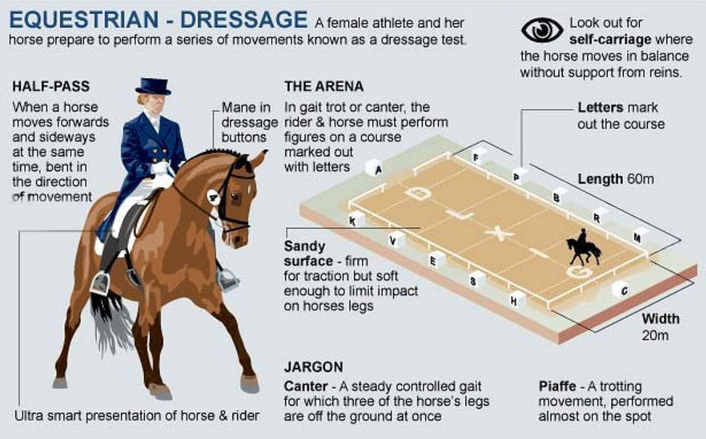 The Format
Dressage tests take place in a 60 x 20-metre sand-based arena. In each round, horses have to perform a series of movements. For the first two rounds, the movements are set in compulsory order. For the final freestyle round, the rider chooses an individual programme, to be set to music. The team dressage consists of three riders per country, with their scores over a single round averaged.

Horse and rider are marked by seven judges who look for accuracy of movement, calmness, suppleness and flexibility. The winner is determined by the average scores over the final two rounds. 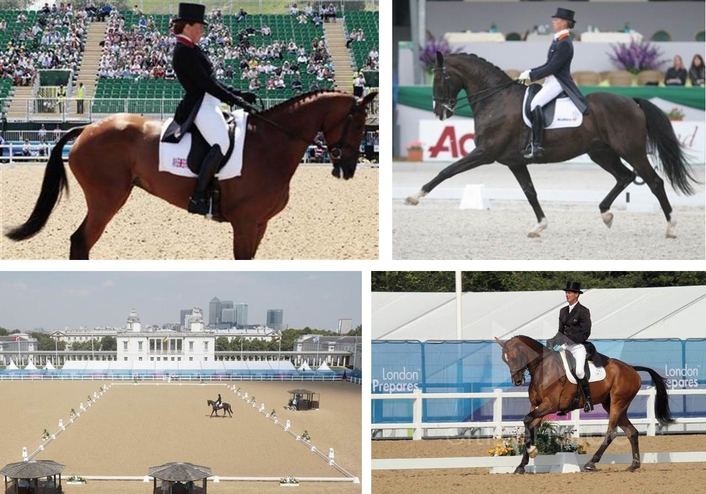