The London 2012 Diving events will take place at the Aquatic Center in the Olympic Park
At the London 2012 Games, Diving requires acrobatic excellence and supreme coordination skills, as athletes dive from heights of up to 10m into the waters below. The Diving competition will take place at the dazzling new Aquatics Centre in the Olympic Park, designed by acclaimed architect Zaha Hadid and built especially for the Games.

Along with Swimming, Synchronised Swimming and Water Polo, the elegant yet dramatic sport of Diving is one of four disciplines that make up the Olympic sport of Aquatics.

History
Competitive diving developed from gymnastics in the 18th century, when gymnasts in Sweden and Germany began to perform tumbling routines into water.

Diving was one of the first Olympic sports to incorporate events for men and women. Men’s diving made its Olympic debut at the 1904 Games in St Louis while women’s diving was added in Stockholm eight years later.

In 1904, where medals were awarded for men in the 10m Platform and the Plunge for Distance (a Diving long jump event, which never again appeared on the Olympic programme). The Americans and Germans, who were the only competitors in the event, were at odds over what constituted a proper dive. The Germans, who crashed onto their stomach and chests on many of their dives, felt that the difficulty of the dive took importance. The Americans on the other hand believed that the entry was the most important. So you had the Germans smacking on harder dives and the Americans performing easier dives with better entries. Protests were filed but in the end Sheldon’s victory was upheld and the U.S. had its first medal.

From 1912 to 1928 divers were ranked by ordinals. Similar to the scoring used by figure skating before 2002, judges would rank divers according to how they believed they finished. Two judges might rank a diver as finishing first with one believing they finished second. The winner was determined by the diver with the lowest total ordinals.

This method of scoring was changed for the 1932 Los Angeles games and to date Olympic diving finishes have been based on the total number of points scored by a diver for all the dives performed.

By the time of the 1996 Summer Olympics, the diving events were exactly the same as in 1928. However, four years later in Sydney, the inclusion of a synchronized diving variant for the springboard and platform events elevated the list up to eight events.

Another important change to the sport already occurred in the 1984 Summer Olympics, when China was first allowed to compete, ending the ban imposed upon them by FINA because of their nation's government. China won most of the medals since then. In Beijing 2008 China has won seven out of the eight gold medals. Australian Matt Mitcham prevented a clean sweep by winning gold in the 10m platform.

The diving disciplines of Aquatics, along with swimming, synchronized swimming and water polo, is regulated and supervised by the International Swimming Federation (FINA), the international federation for aquatic sports.

The Basics
The eight Olympic diving events – four for men, four for women – feature either a springboard, 3m above the pool, or a fixed platform, set at a height of 10m. Springboards must be at least 4.8m long and 50cm wide, while platforms should be at least 6m long and 3m wide. 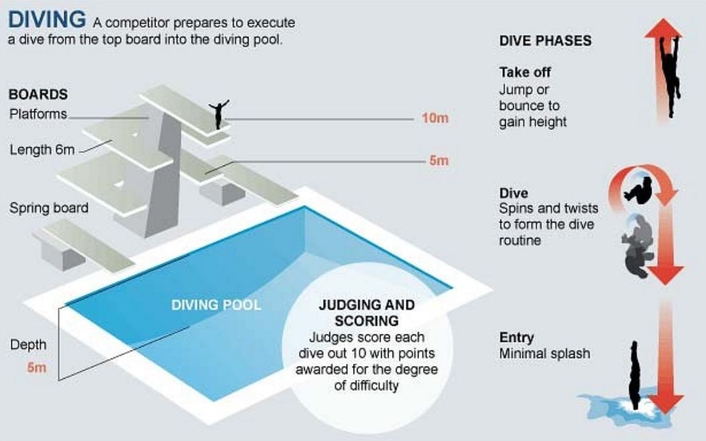 Judges award a score out of 10 for each dive, which is adjusted to take into account the dive’s degree of difficulty. In the Synchronised Diving events, pairs of athletes dive in tandem and are also assessed for their level of synchronisation.

Athletes must also be 14 by the end of an Olympic year to be able to compete at London 2012. Such a rule means diving has one of the lowest age restrictions of all Olympic sports and allowed a 14-year-old Tom Daley to compete at the 2008 Beijing Games. Age restrictions are placed to ensure that young divers do not attempt to jump from heights which they are not capable of.

The Format
Olympic diving competitions (there are eight, four for each gender) are strictly airborne and are held at two heights – a ‘springboard’ dive set at 3m above the water and a ‘platform’ dive, set at 10m.

Athletes compete individually and in pairs (synchronised diving, or ‘synchro’). Individual events consist of a preliminary round, semi-final and final, while the synchro competitions are straight finals.

Styles of diving include front, back, reverse, inward, twist and armstand, with points awarded according to technique and grace. The more difficult the dive the higher the points it can score if executed well.

Judges must also take into account starting positions, run-ups, take-offs, flight and entry into water (which should be perpendicular and cause as little splash as possible).

Each of the seven judges score dives out of 10 and the athlete with the highest total is the winner. The two highest and two lowest scores are discarded and the remaining three scores are added together and multiplied by the difficulty tarrif (of which there are five levels) to give a final score. 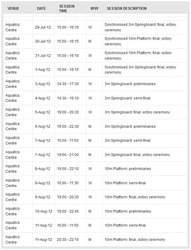