The London 2012 Road Cycling event will start and finish at The Mall (Road Races) and at Hampton Court Palace (Time Trials)
At London 2012, a quartet of challenging, exciting Road Cycling events will energise the streets of London and Surrey. After the opening ceremony road cycling will be the first event to take place. Axed for three games after debuting in the first modern Olympic Games in 1896, the sport has become a permanent fixture since 1912.

The 1996 Atlanta Games saw professional riders compete for the first time and the introduction of the individual road time trial. Possibly the most romantic Olympic moment happened at the 1984 Games when Davis Phinney and his wife Connie became the first couple to win road cycling medals.

History
According to popular legend, the first ever bicycle race was held in Paris in 1868, and was won by a 19-year-old cyclist from Suffolk named James Moore on a wooden bike with iron tires inlaid with ball-bearings that helped speed him past the competition.

Interest in bicycle racing grew in proportion to its great rise in general popularity, and so it was only natural that bike racing was included as one of the events in the first modern Olympic games held in Athens, Greece in 1896.

Bicycles were first developed in the mid-18th century and have been a popular form of transport ever since. In 1885, cycling took a big leap forward when J.K. Starley devised the chain-and-gearing system. Since then, engineers have embraced modern technology to build ever faster, sleeker and lighter bikes.

From 1880 to 1900, cycling became immensely popular both in Europe and the United States. The professional sport maintained its place in the public imagination, especially in Europe. Over the last 20 years, road cycling has experienced a movement towards globalization.

In Europe particularly, road racing captured the attention of cyclists and sports enthusiasts alike, and it was around this time that epic city-to-city races such as Paris-Roubaix and Liege-Bastogne-Liege were started. The first Tour de France was held in 1903 as a promotional event for L'Auto, a French newspaper. The yellow jersey worn by the lead rider in the Tour de France is a tie to the yellow paper that the newspaper was printed on.

Like fencing and athletics, cycling is among the rare sports that have always featured on the Olympic programme. Road cycling, however, was not on the programme of the Paris 1900, St Louis 1904 or London 1908 Games.

The first road event in Olympic history took place in 1896 on the marathon route at the first Games of the modern era in Athens. The race started in Athens, headed towards Marathon, then returned to Athens, at the Phaliron velodrome. Since the 1912 Games in Stockholm, the individual pursuit has been organised at each edition of the Games. The team time trial was on the programme between 1912 and 1992. 1996 marked the debut of the individual time trial at the Olympic Games in Atlanta.

Olympic cycling was added to the women’s program in Los Angeles in 1984, with an individual road event. Later, in 1996, the individual time trial was included in women’s Olympic cycling, as it for the men’s. The Europeans have always dominated Olympic cycling, particularly through the contribution of the French and Italians. Eastern European countries have also won many Olympic medals, especially in track cycling.

It goes without saying that the sport has grown since these humble beginnings. More than 140 years after Moore’s triumph, Road Cycling events draw huge crowds and enormous TV audiences around the world, and the four Olympic medal events at London 2012 should see the streets of London and Surrey packed with passionate fans.

The Basics
The Olympic programme includes two Road Cycling events for both men and women. For the Road Race (approximately 250km for men, 140km for women), all competitors start together, and the first rider to cross the finish line wins gold.

For the shorter Time Trial (44km for men, 29km for women), the riders start 90 seconds apart, and the winner is the rider with the fastest time over the course. Great stamina, astute strategy and powerful acceleration are essential to success in both events, with teamwork also playing a big part in the Road Races. 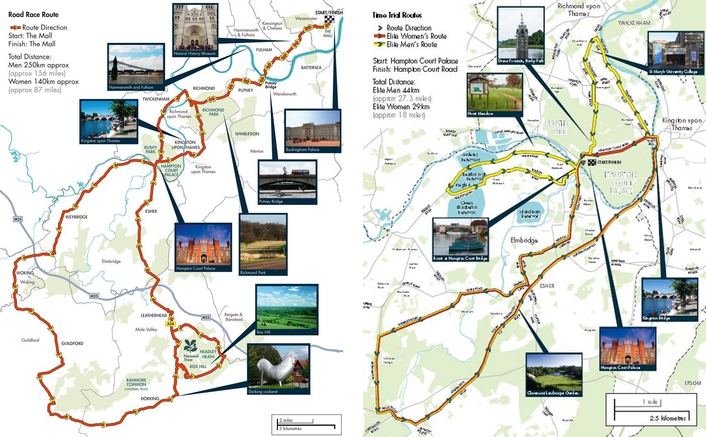 Each team has a maximum of five riders and, like Formula One, strategy often focuses on giving the strongest rider the best chance of winning. Riders looking to win the race must avoid getting stuck in “traffic” by staying relatively near the front.

A commonly used tactic by riders is drafting, where a cyclist will ride closely behind the person in front, in their slipstream, to reduce the effort they have to put in pedaling. Although not scientifically proven, cyclists also shave their legs because it makes them more aerodynamic and therefore faster. It also helps when treating cuts and wounds.

Almost all races end in a sprint to the line and often see riders dramatically change places. Go too early and you will burn out and be overtaken. Wait too long and you may struggle to catch those front runners.

In the time trial pacing yourself is key. Riders are often tempted to try and catch those in front of them, which involves considerable exertion and often leaves them sapped of energy for the latter stages of the race. A steady, slowly increasing pace throughout the race can bear results - especially if you have a strong sprint finish.

The Format
There are two road cycling races at London 2012: the road race and time trial.

The men's Road Race will take place on 28 July, with the women's held on 29 July. Both events will begin on The Mall, before the riders head south-west through six London boroughs (Westminster, Kensington and Chelsea, Hammersmith and Fulham, Wandsworth, Richmond upon Thames and Kingston upon Thames). They will then cross the Thames at Putney Bridge and continue out through Richmond Park and past Hampton Court Palace. The Surrey section of the course incorporates several circuits of a challenging loop around Box Hill (nine for the men’s Road Race, two loops for the women’s equivalent), before the riders head north through Leatherhead, Esher, Kingston, Richmond Park and back to The Mall for a dramatic finish. The men’s race is about 250km while the women’s is 140km.

The organisers have provided a tough but manageable test for the riders. The Home Counties are not renowned for their jagged mountain ranges, but the nine long climbs up Box Hill in Surrey should sort the champions from the also-rans, and the home stretch up the Mall will be a great sporting moment.

In the time trial, where men race 44km and women 29km, riders start 90 seconds apart, and the winner is the rider with the fastest time over the course, which will start and finish Hampton Court Palace in south-west London and take in the boroughs of Richmond, Kingston-upon-Thames and parts of Surrey.

All Olympic teams are expected to train in the south-east and most in Surrey, although specific locations are not expected to be announced until just before the Games.

This year’s Tour de France, which will take place just before the Games, will also provide road race squads with a chance to hone their tactics and test their conditioning.

The road races will take place on the opening weekend of the Olympics. The time trials start on day five. 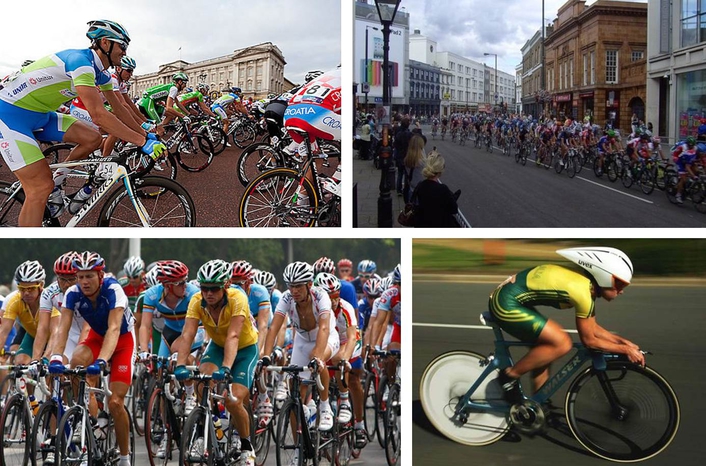