The London 2012 BMX Events will be held at the Velopark
The fast and furious sport of BMX will be making only its second Olympic appearance at the London 2012 Games. BMX (Bicycle Motocross) began to take off in the late 1960s in California, around the time that motocross became popular in the US. The motorised sport was the inspiration for the pedal-powered version, a breathtaking spectacle that’s since become popular all over the world.

History
Somewhere in California during the early 70's, a bunch of kids on modified 20" Schwinn Stingray bicycles went out to a vacant lot and created a brand new sport of their very own.Those kids were probably not even the first. The same scene of youthful energy and American resourcefulness was quite probably going on in Nebraska and/or New Jersey. But it was the California gathering of nameless pioneers who were recorded on film by Bruce Brown's cameras. The resulting motorcycle film, ON ANY SUNDAY, would spread the word like a wildfire.

There was no stopping it now. A new sport created by kids for kids was born. Bicycle Motocross was the name it was given. That name was quickly shortened to BMX. It grabbed the attention of thousands of kids in one short summer. Boys and girls on their modified bicycles were seen jamming through the dirt emulating their motorcycle motocross heroes.

Having made its debut at the Beijing 2008 Games, BMX Cycling is the most recent discipline to have been added to the Olympic programme. Explosive and thrilling, BMX was a welcome addition to the Olympic programme. The pulsating, all-or-nothing nature of the sport has its roots not just in its format – tight turns, hazardous jumps and fierce jostling – but in its competitors. The first Olympic BMX gold medals were claimed by Latvia’s Maris Strombergs and France’s Anne-Caroline Chausson.

The Basics
The BMX races at London 2012 will be held on a short outdoor track, with the riders starting on an 8m-high ramp. The course is built up with jumps, bumps and tightly banked corners. Following individual time trial seeding rounds, eight riders compete in heats, with each race lasting around 40 seconds.

BMX bikes have only one gear and one brake. Most racing riders use wheels that are 20 inches in diameter, roughly two-thirds the size of wheels used on a standard road bike. Bikes need to be strong enough to endure the wear and tear from the jarring landings after jumps, yet light enough to remain fast and competitive. 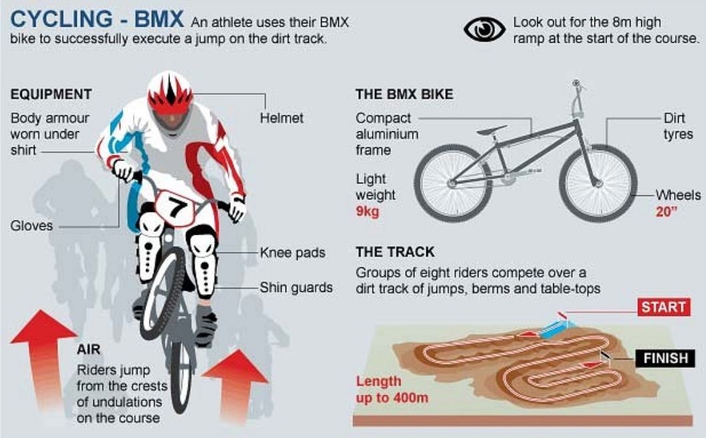 Races are held over a short, tight, twisting circuit with multiple turns and jumps. Eight riders compete in each race. They start from a manually-operated gate and hurtle down a steep slope. First to the finish line wins. The challenge is not to fall off as you whizz around the challenging course.Cyclists wear long-sleeve tops and bottoms, gloves and helmets (which have full masks to protect their faces) when competing. They may also wear knee and elbow pads for extra protection.

Like sprinting and Formula One a good start out of the blocks can set you up for a successful race. A powerful push start and good line into the opening corner are essential, but in the chaos of the start good awareness is needed to avoid clattering into other racers.It is not all about acceleration and speed, with braking an important factor in deciding the outcome of a race. Good braking can give you that vital advantage over your competitors in cornering and jumping.

Controlled aggression is generally rewarded in BMX racing with those riders displaying bravery and intelligence when overtaking often being successful. A Lewis Hamilton-gung-ho-all-out-attack style rarely produces anything but accidents.

The Format
There are 32 places available for men, and 16 for women. For the men, UCI (Union Cycliste Internationale) rankings as of 28 May 2012 are key. The first 24 places are decided in this way; the top five nations are allowed to field three competitors, those ranked sixth to eighth are allowed two, and those listed ninth to 11th, one each. The next six places go to the six best-ranked nations at the 2012 BMX World Championships, who have not qualified already. One of the remaining places goes to the host nation, and the other is awarded by invitation.

The system is similar for women. Nations ranked one to four by the UCI are awarded two places each, those ranked five to seven are given one. The top three nations at the 2012 Worlds (who have not qualified already) have one place each. As with the men, one place goes to the host nation and one is determined by invitation.

The men's and women's events at London 2012 will both start with a seeding phase: each rider runs the track once to determine the seedings, which ensures that the fastest riders don’t meet before the final. The men’s event continues with the quarter-finals, which are held over five races with groups of eight riders.

About the BMX TrackConstruction started on site in spring 2011. The Track was used for the first time during the the third round of the UCI BMX Supercross World Cup, a test event for the London 2012 BMX competition. The 400-metre circuit is located next to the Velodrome in the north of the Olympic Park. 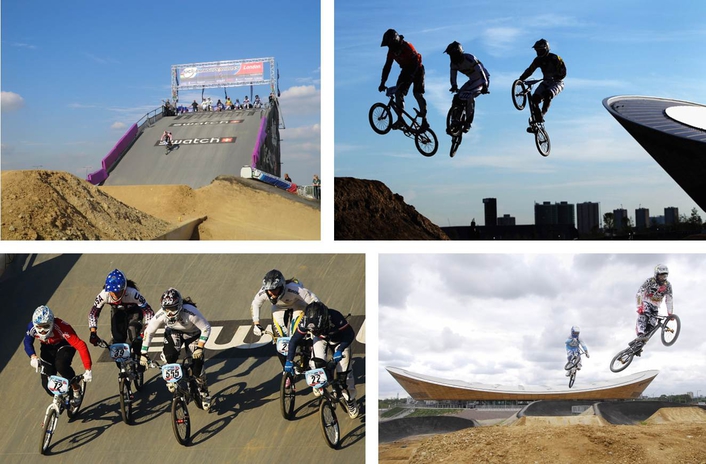