The London 2012 Canoe Sprint Competition will be held at Eton Dorney
Canoeing and kayaking has been featured as a competition sport in the Summer Olympic Games since the 1936 Games in Berlin although it was a demonstration sport at the 1924 Games in Paris. Requiring sustained bursts of speed and power, Canoe Sprint at the London 2012 Games will offer thrilling, down-to-the-wire finishes.

History
The word kayak, meaning “man-boat” in Eskimo, was found predominately in North America, Siberia and Greenland. They were ideal for individual transport and were used primarily for hunting and fishing. The canoe, on the other hand, was used on a wider scale. From Native American tribes to the Polynesians, the canoe had a variety uses, primarily transport, trade and warfare. The basics of Canoe sprint are simple.

The histories of the canoe and the kayak go back hundreds of years, but it wasn’t until the middle of the 19th century that the first official canoe and kayak races were held. The sport now takes two forms, the oldest of which is the power-packed, fiercely competitive Canoe Sprint discipline.

Intrepid Scottish barrister, John MacGregor was the first European to use an Inuit Kayak for tourism and excursion purposes, he also formed the first-ever kayak club “The Royal Canoe Club of London” on the 25 July 1866 in London. The first Canoeing competition, organised by MacGregor, was held in 1869. In 1871 the “New York Canoe Club” was established. The first women’s competition was organised in Russia. By the 1890s, canoe sport was popular all over the European continent.

Under the auspices of the Internationale Repräsentantenschaft Kanusport (IRK), which was formed in January 1924 in Copenhagen, the first European Championships were held on the 19 August 1933 in Prague. Canoeing first featured as a demonstration sport at the 1924 Paris Games. On the 16 May 1934 the International Olympic Committee approved the appearance of the sport of Canoeing at the Olympic Games and this was realised in 1936 at the XI Olympic Games held in Berlin when races were held over of 1,000m and 10,000m.  Since then, the Olympic events have grown shorter: the last long-distance events were held at the Melbourne Games of 1956. the Women’s category was added to the Olympic programme in 1948.

The Basics
Canoe Sprint events are head-to-head races conducted on still water, as opposed to the white water time trials of the Canoe Slalom competition. Athletes race over distances of 200m, 500m or 1,000m, either solo, in pairs or in teams of four.

As an outdoor sport weather can affect the outcome of a race. Choppy, as opposed to still or calm, water and windy conditions can make a race more physically gruelling and harder to negotiate. 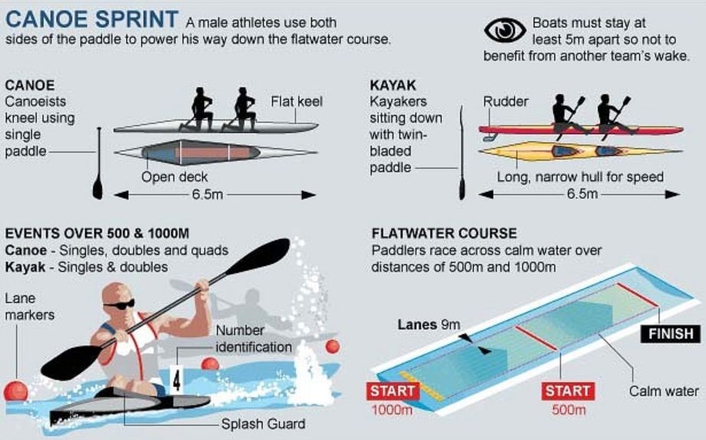 Nine canoes, all in a row, racing along a straight, still stretch of water. First to the line wins.

Paradoxically, it is one in which the big Olympic powers – America, China and Russia – have had comparatively little success in recent years. Central and eastern Europe are currently the powerhouses of the sport.

The major change from Beijing is the replacement of the men’s 500-metre races with the more explosive 200m races. Women, however, will still race over 500-metres except the kayak single.

The Format
For London 2012, the Canoe Sprint competition will be held at Eton Dorney, one of the best still-water courses in the world with a wonderful location close to Windsor Castle. Races will be held over distances of 1,000m, 500m and, for the first time at the Games, 200m: with the fastest races taking just 30 seconds to complete, it’s bound to be very popular with spectators and athletes alike.

The most successful Olympic competitor is the German Birgit Fischer who in her long Olympic career between 1980 and 2004 won 8 gold and 4 silver medals. Her achievements mark her as both once the youngest- (aged 18) and oldest-ever (aged 42) Olympic Canoe Champion. Birgit also won 28 World Championship Golds, 6 silver and 4 bronze medals throughout her career.

Despite its relatively low profile, canoeing is one of the more lucrative Olympic pursuits, with 12 gold medals to be won. 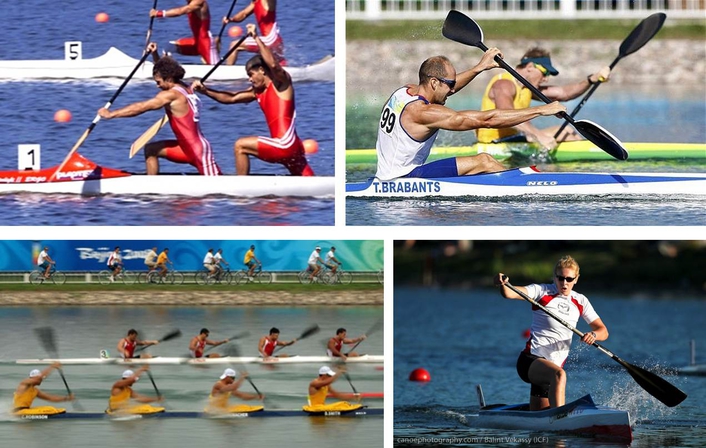