History
In 1920, new jetties in Santa Monica, California created a large sandy area for public enjoyment, planting the seed for beach volleyball development in that region. The first permanent nets began to appear, and people soon began playing recreational games on public parts of the beach and in private beach clubs. Eleven such beach clubs appeared in the Santa Monica area, beginning in late 1922. The first inter-club competitions were staged in 1924.

Most of these early beach volleyball matches were played with teams of at least six players per side, much like indoor volleyball. The concept of the modern two-man beach volleyball game is credited to Paul "Pablo" Johnson, an indoor player of Santa Monica Athletic Club. In the summer of 1930, while waiting for players to show up for a six-man game, Johnson decided to try playing with only the two people present. The game was forever changed. Though recreational games continue to be played with more players, the most widely played version of the game, and the only one contested at an elite level, has only two players per team.

The event now regarded as the first Beach Volleyball World Championships was held in the state in 1976, and was even won by a pair of Californians (Greg Lee and Jim Menges). However, over the last three decades, the sport has moved far beyond its West Coast roots and is now played all over the world. 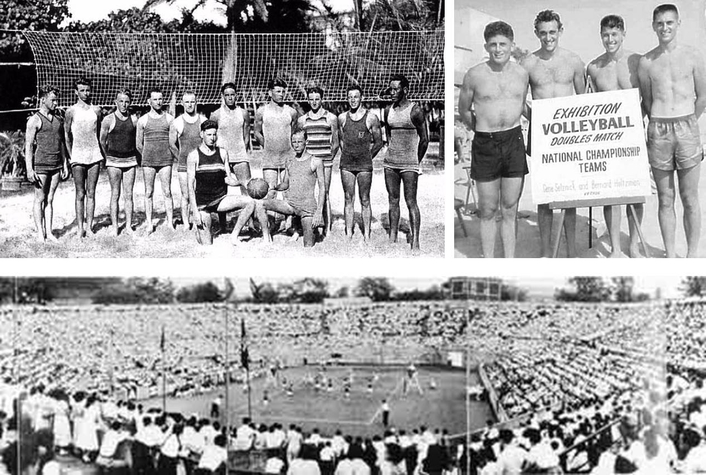 At the professional level, the sport remained fairly obscure until the 1980s when beach volleyball experienced a surge in popularity. Players like Sinjin Smith, Randy Stoklos and Karch Kiraly became household names. In 1987, the FIVB created the first World Beach Volleyball Championships, played in Rio Janeiro, Brazil won By Sinjin Smith and Randy Stoklos. The FIVB began organizing worldwide professional tournaments, and laid the groundwork for the sport's Olympic debut in 1996.

The basics
Beach Volleyball is similar to the indoor game, which also features on the Olympic programme, but with two main differences. The court, which measures 16 x 8 metres, is covered in sand and situated outdoors; and the game is played by teams of two, instead of teams of six.

The object of the sport is to land the ball in the opposition’s half of the court. After the serve, each team is allowed three touches of the ball before it must cross over the net – set at a height of 2.43m for men and 2.24m for women – to the opposition. Matches are played in a best-of-three-sets format. The first two sets are the first to 21 points, though a two-point lead is needed to win, and in the deciding set it is first to 15. The players change sides every seven points, or every five in the third set. The two players rotate serve. The ball is not a beachball, in case you were wondering, but it is softer, slacker and slightly larger than an indoor volleyball. 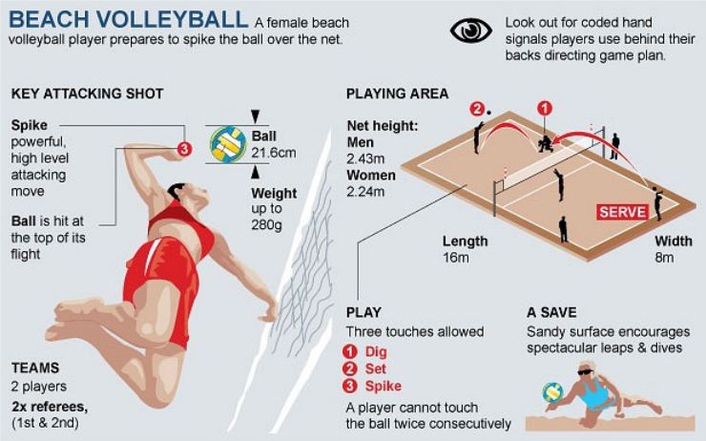 In 1999 FIVB said that players must wear standardized uniforms, which for men meant wearing shorts (vests or t-shirts are optional) and women bikinis. The decision proved controversial with some players, arguing the move was taken to make the sport sexy. Others defended the decision saying it was a practical one given the conditions - hot and humid - that the game is played under.

Players can use any part of their body to hit the ball, they just can’t catch or throw it. They communicate with each other with hand signals, made behind their backs to hide them from the opposing team, usually made before the serve, to indicate what kind of block they will attempt.

The game is fast and frantic and played in hot, humid conditions meaning players have to keep hydrated to maintain performance. Typically players will consume roughly two litres of water every hour during games and significantly more afterwards to aide recovery.

The Format
At London 2012, both the men’s and women’s Beach Volleyball events will begin with a preliminary phase: the 24 teams in each event will be divided into six pools of four, and each team will play every other team in their pool. A total of 16 teams from this phase will qualify for the knockout phase, with the winners of the semi-finals eventually going head-to-head for the gold.

Six groups of four play a round-robin, with the first two teams automatically through to the knock-out stages. Two of the six third-placed teams go through as well, with the other four playing off for the final two places.

The sand used during the Games will be high-quality Redhill 28 sand from a quarry in Surrey. 2,274 tons will be needed to fill one competition court, two warm up courts and two training courts.