History
Basketball was invented in 1891 by Dr James Naismith, a Canadian physical education teacher who wanted to create a game that could be played indoors during the winter by his students at the YMCA in Springfield, Massachusetts.

The first game, which took place in December 1891, used peach baskets for goals. In the 120 years since these humble beginnings, basketball has grown into one of the most exciting and popular team sports in the world.

Men’s Basketball first appeared on the Olympic programme at the Berlin 1936 Games, with the women’s event introduced at Montreal 1976. Professional players first competed at the Barcelona 1992, when the famous US ‘Dream Team’ won gold in the men’s event. Prior to its inclusion as a medal sport, it was held as demonstration event in 1904 and 1932, both in the United States. The United States is by far the most successful nation in Olympic basketball. American men's teams won 13 of 16 tournaments they participated in, including seven successive titles from 1936 to 1968. American women's teams won 6 titles out of 8, including four in a row from 1996 to 2008.

The basics
Basketball is played by two teams of five players on an indoor court that is 28 metres long and 15m wide. Points are scored by shooting the ball into your opponents’ net (or 'basket'), which has a diameter of 450-459mm and sits on a backboard 3.05m above the floor.

Two points are awarded for a regular shot from open play, with one point for each successful free throw (following an opposition infringement) and three points for a shot from distance (beyond what’s known as the three-point line, 6.75m from the basket). Games last for 40 minutes, split into four 10-minute quarters. 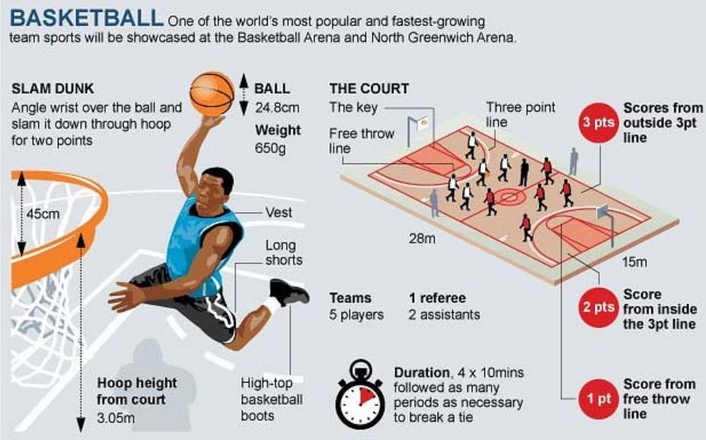 At London 2012, both the men’s and women’s Basketball competitions will begin with a preliminary stage: the 12 teams will be divided into two groups of six, and each team will play every other team in their group. The best eight teams during the preliminaries will qualify for the knockout stage, with the winners of the semi-finals going head-to-head in the gold medal game.

The Format
At London 2012, the Basketball competition will take place in two venues. All preliminary games, along with the women’s quarter-finals, will take place at the Basketball Arena, a new, purpose-built venue in the Olympic Park. The men’s quarter-finals, plus all semi-finals and medal games, will be held at the state-of-the-art North Greenwich Arena just across the Thames.

The 2012 basketball tournament will follow the established format of 12 teams, divided into two pools of six. Those teams, apart from the holders and hosts, traditionally qualify on a continental basis.

The rules are simple enough: you have a hoop 10 feet above the ground, you get two points for throwing the ball through it, three points if you are outside the three-point line, and one-point for a free-throw, which is awarded for a transgression.

In Olympic basketball, games consist of four quarters of 10 minutes (as opposed to the NBA, which has 12-minute quarters). The clock is stopped when there is a delay, stoppage, substitution or time-out, so although there is 40 minutes of actual playing time, games usually last a lot longer.

There are no draws in basketball. If the scores are level after the fourth quarter, a five-minute overtime period is played, followed by further five-minute periods as necessary.

Each team can bring a squad of 12 players to the Olympics and professionals, including those in the NBA, can be selected. 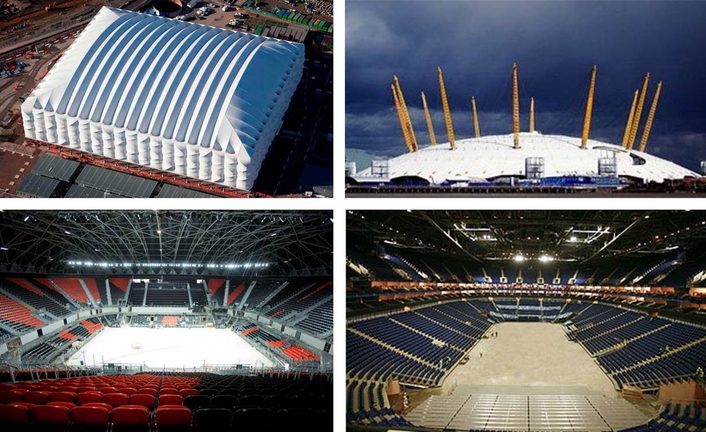 Each team can field five players who can be rotated via rolling subs. The traditionally accepted positions are point guard (the playmaker), shooting guard (the point scorer), power forward (in defence they block shots and in attack use their size to set up point scoring opportunities), small forward (a versatile role which involves elements of the power forward and shooting guard) and centre (normally the team’s tallest player who uses their size to dominate ‘under the boards’ in both attack and defence).