The London 2012 Badminton competition will be held at Wembley Arena, on a site that has hosted major events
Since 1992, badminton has been an Olympic sport with five events: men's and women's singles, men's and women's doubles, and mixed doubles, in which each pair consists of a man and a woman. At high levels of play, especially in singles, the sport demands excellent fitness: players require aerobic stamina, agility, explosive strength, speed and precision. It is also a technical sport, requiring good motor coordination and the development of sophisticated racquet movements.

History
The beginnings of Badminton can be traced to mid-18th century British India, where it was created by British military officers stationed there. Early photographs show Englishmen adding a net to the traditional English game of battledore and shuttlecock. Being particularly popular in the British garrison town Poona (now Pune), the game also came to be known as Poona.  Initially, balls of wool referred as ball badminton were preferred by the upper classes in windy or wet conditions, but ultimately the shuttlecock stuck. This game was taken by retired officers back to England where it developed and rules were set out.

Although it appears clear that Badminton House, Gloucestershire, owned by the Duke of Beaufort, has given its name to the sports, it is unclear when and why the name was adopted. As early as 1860, Isaac Spratt, a London toy dealer, published a booklet, Badminton Battledore – a new game, but unfortunately no copy has survived. An 1863 article in The Cornhill Magazine describes badminton as "battledore and shuttlecock played with sides, across a string suspended some five feet from the ground".

As early as 1875, veterans returning from India started a club in Folkestone. Until 1887, the sport was played in England under the rules that prevailed in British India. The Bath Badminton Club standardized the rules and made the game applicable to English ideas. J.H.E. Hart drew up revised basic regulations in 1887 and, with Bagnel Wild, again in 1890. In 1893, the Badminton Association of England published the first set of rules according to these regulations, similar to today's rules, and officially launched badminton in a house called "Dunbar" at 6 Waverley Grove, Portsmouth, England on September 13 of that year. They also started the All England Open Badminton Championships, the first badminton competition in the world, in 1899.

The Basics
Badminton is a racquet sport played by either two opposing players (singles) or two opposing pairs (doubles), who take positions on opposite halves of a rectangular court that is divided by a net. Players score points by striking a shuttlecock with their racquet so that it passes over the net and lands in their opponents' half of the court. Each side may only strike the shuttlecock once before it passes over the net. A rally ends once the shuttlecock has struck the floor. 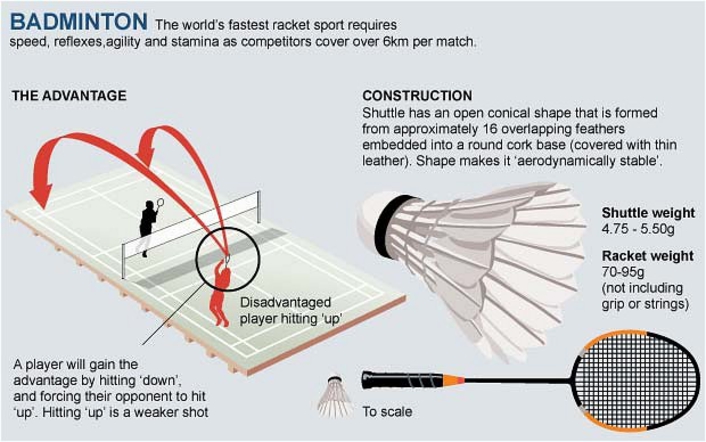 The shuttlecock (or shuttle) is a feathered projectile whose unique aerodynamic properties cause it to fly differently from the balls used in most racquet sports; in particular, the feathers create much higher drag, causing the shuttlecock to decelerate more rapidly than a ball. Shuttlecocks have a much higher top speed, when compared to other racquet sports. Because shuttlecock flight is affected by wind, competitive badminton is played indoors. Badminton is also played outdoors as a casual recreational activity, often as a garden or beach game.

The International Badminton Federation (IBF) (now known as Badminton World Federation) was established in 1934 with Canada, Denmark, England, France, the Netherlands, Ireland, New Zealand, Scotland, and Wales as its founding members. India joined as an affiliate in 1936. The BWF now governs international badminton and develops the sport globally.

While initiated in England, competitive men's badminton in Europe has traditionally been dominated by Denmark. Asian nations, however, have been the most dominant ones at the world level. Indonesia, South Korea, China, and Malaysia along with Denmark are among the nations that have consistently produced world-class players in the past few decades, with China being the greatest force in both men's and women's competition in recent years. 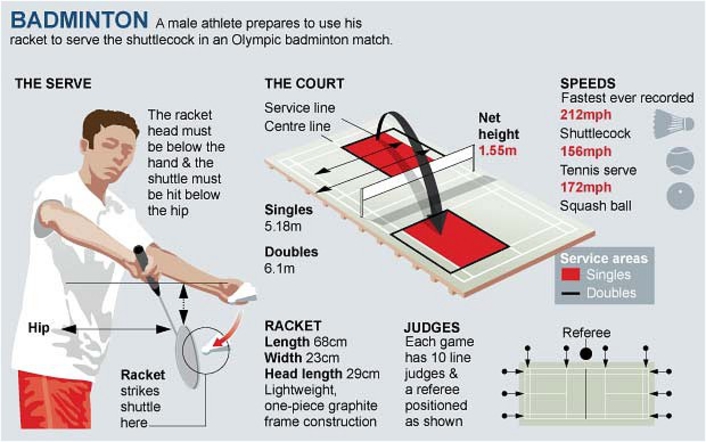 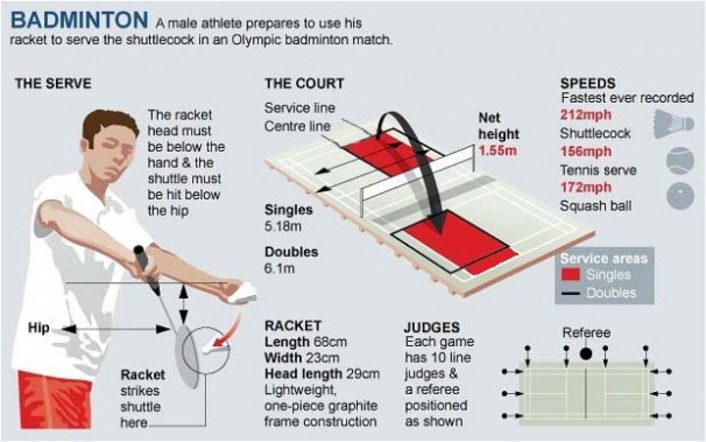 The game of badminton is played on a court 13.4 metres long and 6.1 metres wide, which is divided in a half by a net about two metres high.

The purpose of the game is to get the shuttlecock over the net, using a racket, and make it land in your opponent's half of the court or have them hit it into the net or out of bounds. Games are won by the first team to reach 21 points, with a margin of at least two points. A match is the best of three games.

The London Olympics
Although the rules of the modern sport were developed in England, Asian countries now dominate: China, Indonesia and South Korea have won 23 of the 24 gold medals awarded since the sport’s first appearance at the Games.

The London 2012 Badminton competition will be held at Wembley Arena, on a site that has hosted major events ever since the British Empire Exhibition opened there in 1924.

At London 2012 players will compete first in a group stage, before progressing to the knock-out stage of the competition. They will play with a very specific sort of shuttlecock, weighing between 4.74 grams and 5.5g and containing 16 feathers, each plucked from the left wing of a goose. These shuttlecocks can travel at speeds in excess of 400km/h.

Matches are played over the best of three games, and each game is won by the first player or doubles pair to reach 21 points by a margin of two clear points. However, if the score reaches 29-29, the winner of the next point wins the game.

At London 2012, there will be five medal events: men’s and women’s Singles, men’s and women’s Doubles, and Mixed Doubles. All events will begin with a preliminary stage: the competitors will be divided into groups, and each player and doubles pair will play everyone else in their group.

The best players and doubles pairs from this stage (16 in each Singles event, eight pairs in each Doubles event) will qualify for the knockout stage of the competition, which will eventually decide the winners of the medals.