The Archery events at the 2012 Summer Olympics are scheduled to be held over an eight day period from 27 July to 3 August
Archery had its debut at the 1900 Summer Olympics and has been contested in 13 Olympiads. Eighty three different nations have appeared in the Olympic archery competitions, with France appearing the most often at 11 times. It is governed by the International Archery Federation. Recurve archery is the only discipline of archery featured at the Olympic Games.

History
Archery dates back around 10,000 years, when bows and arrows were first used for hunting and warfare, before it developed as a competitive activity in medieval England. In the 14th century, archery was considered so important to the defence of the nation that an English law made it compulsory for every man aged between seven and 60.

The second Olympic games, Paris 1900, saw the first appearance of archery. 7 disciplines in varying distances were contested. The next Olympics, St. Louis 1904, had 5 archery events but no athletes from outside the United States competed. At the 1908 Summer Olympics, there were 3 archery events. Archery was not featured at the 1912 Summer Olympics but reappeared in the 1920 Summer Olympics.

A tense and testing sport that requires immense reserves of skill and nerve, Archery is now practised in more than 140 countries around the world.

Qualification
Qualification spots in archery are allotted to National Olympic Committees rather than to individual athletes.

There were four ways for NOCs to earn berths in Olympic archery. No NOC is allowed to enter more than three archers of each gender. For each gender, the host nation is guaranteed three spots. The most recent World Target Competition's top 8 teams (besides the host nation) each receive three spots, and the 19 highest ranked archers after the team qualifiers are removed also earn spots for their country. 15 of the remaining 18 spots are divided equally among the five Olympic continents for allocation in continental tournaments. The last three spots in each gender are determined by the Tripartite Commission invitation.

Each NOC that receives three places for individual archers (i.e., the host nation, the top 8 teams at the World Target Competition, and any other nation that is able to take 3 of the remaining 37 places) is able to have its three archers compete as a team in the team competition.

Competition
Modern Olympic archery consists of four medal events: men's individual, women's individual, men's team, and women's team. In all four events, the distance from the archer to the target is 70 metres.

INDIVIDUAL: In the individual competitions, 64 archers compete. The competition begins with the ranking round. Each archer shoots 72 arrows (in six ends, or groups, of 12 arrows). They are then ranked by score to determine their seeding for the single-elimination bracket. After this, final rankings for each archer is determined by the archer's score in the round in which the archer was defeated, with the archers defeated in the first round being ranked 33rd through 64th. 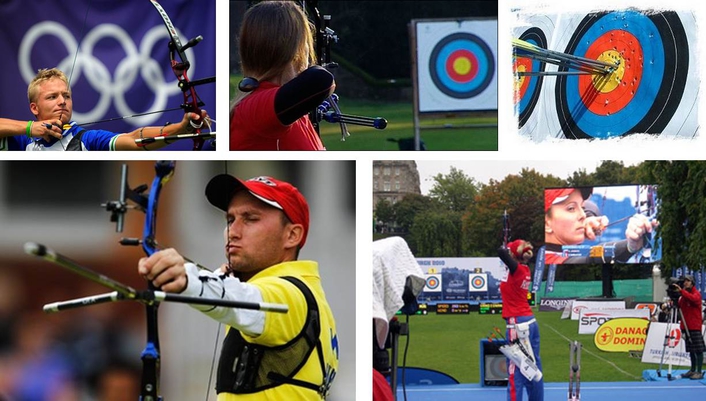 The first team round is the round of 16, but as the number of teams is usually between 9 and 15 the highest ranked teams typically get a bye in the first round. Matches consist of each team firing 27 arrows in 3 ends of 9 arrows, with each archer on the team firing 3 arrows per end. Advancement and medals are determined in the same manner as the individual competition.

All four events shall be recurve archery events, and shall be held under the FITA-approved 70-metre distance and rules. An initial ranking round involving all 128 archers shall take place, before competitors move on to the 'Olympic round', which will be played in a tournament or single elimination format in each event. In each individual event, all 64 archers of each gender shall participate; in each team competition, there shall be a field of 12 teams, each consisting of three archers. 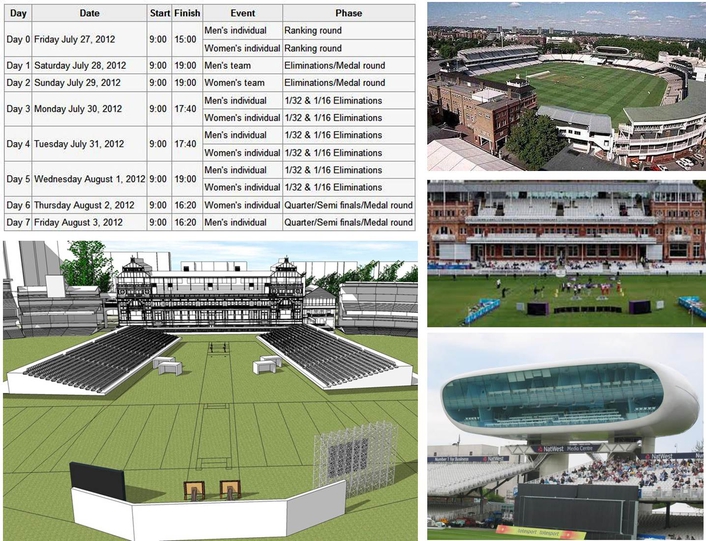 The ranking round will be used to seed both individual and team events, the latter by aggregating the individual scores for the members of each team; from there, the Olympic round will be conducted in tournament, single-elimination format where one loss will eliminate the competitor, save for the semifinals. In that round, the losers will move on to bronze medal competition; the winners will move on to compete for the gold medal.