The New Frontiers of Sports Tracking 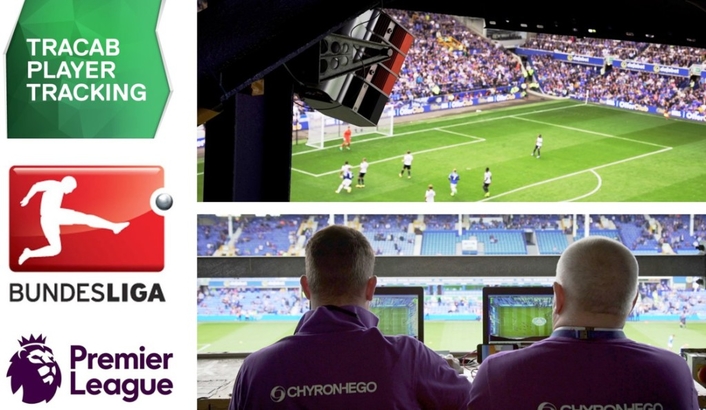 If you’re a football fan who never misses your team’s matches on television, it’s a safe bet that you’ve enjoyed some of the benefits of a digital sports tracking system. Driven by technologies that can track and collect data on the movement of players, officials, and the ball, these systems have been enriching sports broadcasts and team analysis for several years.

But sports tracking systems have only recently taken off on a global scale, thanks to a current and ongoing surge in innovation that is pushing the boundaries of the technology to eye-opening new levels of automation, accuracy, and visual impact. Whether they’re used to visualize historical data on players and clubs in powerful new ways or to create an all-new fan experience using virtual reality, next-generation tracking systems are redefining the development of team sports and the viewer experience.

In this article, we’ll take a look at the bleeding edge of sports tracking technology and describe some of the newest developments that are shaping the sports tracking systems of the near future – and may soon be coming to a pitch near you.

There are a few different permutations of sports tracking, including so-called active systems that place a physical transponder or sensor on the player or ball. The focus for this article is on non-intrusive or passive solutions that use an array of optical cameras and radar data-capturing technology installed at strategic areas around the pitch.

The state of the art in this category, ChyronHego’s TRACAB, uses HD cameras and advanced image processing technology to build a digital record of the action. At up to 30 times a second, the system captures the precise movement and speed of players, officials, and even the ball. The image processing software then analyses every image to extract X, Y, and Z positions for each object, resulting in a real-time, three-dimensional view of the players’ movements. Via open protocols, the captured data can then be made available to a graphics rendering platform for on-screen presentation to a viewing audience or coaching staff.

Sports tracking systems first emerged as internal tools for sports clubs and teams. Today, these systems play an ever-growing role in helping coaches gather insight and assess the metrics of key performance indicators such as distance run, speeds, stamina, team formations, set-plays, and other factors. Coaches can use the information to evaluate team defensive and offensive plays as well as an individual player’s performance, and the data can inform decisions such how best to deploy a given player (in isolation or within the team structure). In addition to boosting their own team performance, sport clubs can gain intelligence into competing teams – and the tracking data can play a valuable role in scouting activities both locally and internationally.

In addition to enhancing team performance, the data from sports tracking systems enables broadcasters to tell a more exciting story for viewers through graphically enhanced replays, or even fully virtual replays in which 3D animations recreate player movements. On-air pundits and expert analysts can better explain the dynamics of how games have been won or lost, and use the data to empirically support their hunches. In addition to powering TV graphics and second screen experiences, sports organizations can leverage this content source for marketing and public outreach; for instance, they can use it to help explain the game and its tactics and highlight star athletes’ performance.

Such systems are having an impact on virtually every type of team sport including football, baseball, American football, cricket, and even tennis. TRACAB, for instance, has been installed in well over 300 arenas and is used in more than 4,500 matches per year by major football federations around the globe.

Collaborating for the Future

Building on these successes, two of the world’s largest and most avidly followed sports organizations – the Deutsche Fußball Liga (DFL) and the English Premier League – are taking the lead to develop the next generation of sports tracking technology. Not only have both organizations recently renewed their contracts to use TRACAB for their own teams, but they are collaborating with ChyronHego to build powerful new capabilities into the system.

The English Premier League has been using TRACAB to bring a new dimension to its live football coverage since 2013. Going forward, the system will continue to deliver real-time ball- and player-tracking data and enable powerful insight into match play for all 20 Premier League clubs over the 2016/2017, 2017/2018, and 2018/2019 seasons, at 380 matches per season. The Premier League is capable of streaming the live data feed generated by TRACAB to a multitude of visualization platforms, such as broadcast graphics systems and online or mobile platforms, and the data is also being used to support comprehensive sets of performance statistics for sports analysts.

In Germany, TRACAB is installed in all 35 DFL arenas to collect real-time ball and player-tracking data for all Bundesliga and Bundesliga 2 matches. Over the next four years, the system will enable powerful team and player insight and build on the club’s valuable historical database of player and team performance for almost 2,500 matches.

In addition, ChyronHego is working in close partnership with the DFL’s new subsidiary, Sportec Solutions GmbH, which provides data gathering, storage, and distribution for Bundesliga and Bundesliga 2. With this collaboration, ChyronHego and Sportec Solutions are developing a next-generation optical player-tracking system based on the core capabilities of TRACAB. The new optical tracking solution will initially be deployed for DFL clubs, but will also eventually be marketed to other sports organizations globally.

These partnerships are already beginning to yield results in the form of powerful new capabilities for TRACAB. One development is the TRACAB Portal, an all-new web-based solution for displaying tracking data and using it to visualize standard team metrics as well as a host of new key performance indicators (KPIs). TRACAB Portal is pushing the boundaries of innovation in sports tracking on several fronts:

Enhanced metric generation. While TRACAB has always had built-in ball-tracking capabilities, TRACAB Portal will take those capabilities further than they’ve ever gone before. The new system will enable sports teams to collect a richer set of ball data indicating possession, passes, and status (whether the ball is in or out of play). By tracking the speed and duration of sequences in which the ball is in control, this data will drive a new set of KPIs around player performance – such as the amount of successful passes by a single player, how many of those passes were made under pressure, how many opponents were bypassed by the player making the pass, and how many players did the receiver bypass before taking the ball.

Leveraging historical data. Clubs such as the DFL, which has been built a solid database of TRACAB metrics over several seasons of play, will be able to use TRACAB Portal to present the historical data in powerful and unprecedented new ways. They will be able to create benchmarks of player performance over time to inform decisions such as which players are best for playing certain positions, or how to backfill key players that are out due to injury. Sports clubs will also be able to use the historical data to make cross-season comparisons and track team performance from season to season.

Tracking player development. With the enhanced data in TRACAB Portal, clubs will be better equipped to track and manage players’ physical characteristics over a period of time; for instance a player’s top speed value and how his speed is affected after an hour of continuous of play, or how many sprints and jumps a player can make before he begins to tire. By creating an understanding of the stamina and ability of each player, these metrics will play a vital role in preventing injury – for instance, knowing when it’s time to pull a player out of action and sub in another, or monitoring a player’s performance just after he returns from an injury break. 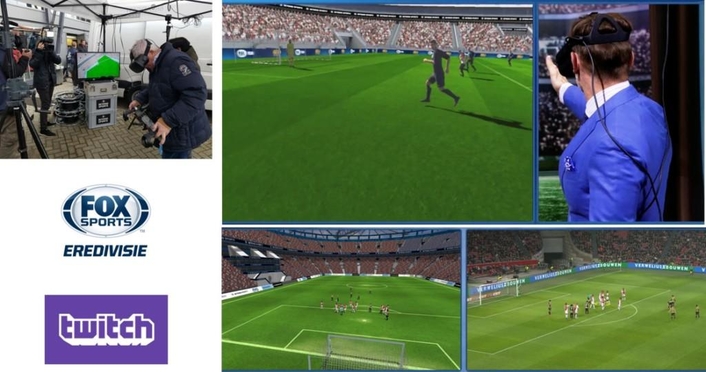 One recent breakthrough in the sports tracking world deserves a mention: an exciting marriage of TRACAB and virtual reality (VR). On Feb. 26, 2017, Fox Sports Netherlands (FSNL), the official broadcaster for the Dutch football league Eredivisie CV, conducted the first-ever live broadcast of a football match enhanced with computer-generated VR. The VR version of the match between the Eredivisie clubs Feyenoord and PSV was streamed in real-time to Twitch, a social video site for the gaming community, where it captured a live online viewing audience of over 20,000 total views.

FSNL understands that keeping younger audiences engaged over an entire 90-minute football game requires innovation and a different approach. To that end, the broadcaster teamed up with Beyond Sports, a Dutch provider of international VR sports technologies, and ChyronHego to prove the concept of VR in live sports and deliver a highly immersive and interactive viewing experience. ChyronHego and Beyond Sports created a workflow in which the live tracking data generated by TRACAB could be visualized in a VR format. After operators calibrated TRACAB to provide the positional data for each player, they then assigned the player’s name to the TRACAB-generated “token.” This data was then fed to the Beyond Sports virtual engine, which presented the avatars on the field and determined their actions based on the live players’

It’s All About Data

The common thread in all of these technology developments is data – large quantities of it, captured in real-time with the highest-possible accuracy and then visualized in new and innovative ways. FSNL, for instance, has taken on that visualization challenge by proving the concept of VR for capturing and engaging younger audiences. The result is a truly disruptive approach to sports broadcasting that will see wide adoption in the near future. Only TRACAB, working in concert with Beyond Sports’ VR engine, could provide the degree of accuracy FSNL needed to create a realistic and believable virtual world for the live match. 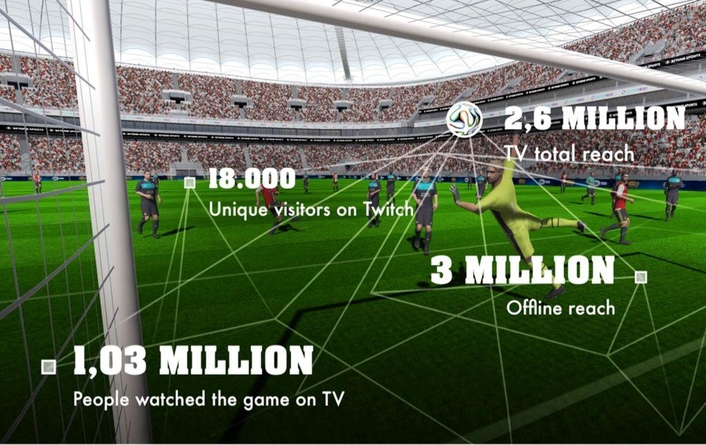