The evolving art of sports television
Given the choice of watching a major live event on site or via television, most people would opt for the real thing. Sure, you have to get to the venue, perhaps queue to buy a ticket, find your seat or maybe stand for hours. If it is a football match, the audience in front will probably stand up for a better view of each goal, completely blocking your view. But you are there and you feel part of it.

Sports broadcasters compete with reality by trying to give television viewers a more vivid visual experience than they could ever get at the actual event. In other words, television is expected to deliver an experience which is larger than life. This was a tall order in the early days of bulky cameras and turret lenses. Easier now given modern lightweight high-performance cameras and motorised zoom optics. But it still takes a lot of work to integrate these into practical systems that can be controlled from a distance and will operate reliably over a wide range of weather conditions.

Camera Corps' efforts as a company have centred on developing remotely-controllable cameras and camera tracking systems to follow the action from every angle a programme-director could request. This kind of remote control doesn't just mean a few hundred metres away but even from one country to another.

It is a strategy that has won contracts to support the biggest and best events in the entire world sports calendar, from locations such as Athens, Atlanta, Barcelona, Beijing, Budapest, Delhi, Johannesburg, Lillehammer, London, Melbourne, Nagano, Sydney, Warsaw and Vancouver.

An important consideration for many directors is to avoid the distraction of the allowing point-of-view cameras to obscure or clutter the images from other cameras. POV cameras should be capable of delivering the best possible image without themselves spoiling or interrupting the live or televised view of the game. Over the years, we have produced a wide range of tools dedicated to specific types of sports outside broadcasting. Let's take a look at these by individual activity.

Aquatics
Our involvement in OB coverage of water-sports extends from the design and construction of poolside and overhead flown-track systems to underwater remote cameras, vertical dive-tracking systems and river-side cameras. 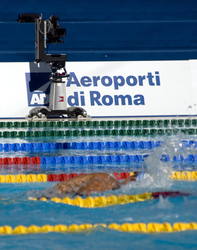 Poolside Trackcam allows the camera to move at the same speed in the same direction as the live action. Successfully used in many major swimming tournaments, it has highly controllable acceleration and can advance the camera to a maximum speed of 3.8 metres per second. Figure 1 shows a Poolside Trackcam in use at the FINA World Swimming Championships held in Rome during summer 2009. Ambient temperatures reached around 40 degrees Celsius throughout much of the two week-event and 81 degrees in direct sunlight but the entire event was covered without interruption.

Having pioneered the development of the original HotHead remote camera control system, we developed its aquatic-sport equivalents. The Underwater Remote Camera permits total control of the head, allowing the operator to pan with a swimmer during the approach and turn at the end of every lap, capturing the vital 'touch' and 'push-off'. In diving events, these heads can be placed on the pool bottom to capture each contestant's entrance into the water. The operator is able to follow the diver to the bottom of the pool and see the kick back to the surface. The camera also provides excellent coverage of underwater action in water polo.

Developed to capture aquatic sports from both above and below the water line, Dip Cam consists of a waterproof 3-CCD camera and portable monitor which can be mounted on a lightweight aluminium pole. The camera can be submerged to a depth of 1.8 metres and is fully controllable from a CCU panel which can be operated locally or in the master control room. 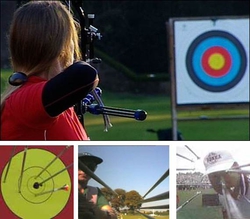 Archery
One of the most extreme examples of invisible POV sports coverage in which we have been active involves placing cameras into archery targets to show incoming arrows as they approach the bullseye. For a major international sports event in Beijing during summer 2008, the company was asked to provide a practical archery target camera in HD. We had previously designed and implemented an SD camera based on a 6 mm diameter single-CCD imager was the design team mount in the exact centre of the target. Since no HD camera that small existed then (or indeed exists now), a special lens 180 mm long by 10 mm diameter was commissioned, tapering down to just 2 mm diameter at the tip.

Artistic Gymnastics
We have provided vault tracking for almost every major international sports event since 2000. Based on a 300 mm gauge track, Vault Track can be fully operational within 4 hours of delivery and packed away within 3 hours. Figure 2 shows the Vault Track in use at the 2009 Artistic Gymnastics World Championships at the O2 arena in London. A 30 metre length of track was installed on an 800 mm high support parallel to the 25 metre approach and 5 metre vaulting section. The drive mechanism in the camera head allowed 90 degrees of vertical adjustment in camera angle at horizontal tracking speeds of up to 10 metres per second with full control of acceleration and deceleration. The camera itself in this case was a 1080i Hitachi DK-H32 with a Fuji 4 x 7.5 HD zoom lens.

Baseball
The sandy surface of a baseball base is one of the most camera-hostile environments imaginable. We designed an ultra-low profile 3-CCD camera which could be embedded in the sand to capture the arrival of players as they came sliding to a halt. Each camera can be fully controlled from a remote CCU panel, including lens aperture and colour-matching. Air blowers integral with the camera head ensure a clear picture throughout the game. For referees, a miniature Baseball Ref Vest Cam was developed and used to great success at the Asian Games in the Qatari capital, Doha.

Basketball
Placing a camera close to each net in a basketball game can deliver very high-impact images both of the approaching action of the entire playing area. The camera itself must obviously be placed in a position that will not block the ball's trajectory or in any other way interfere with the game. Safety being paramount, the Goal Cam is designed to withstand a direct hit from a ball or player without breaking free of the net. It can be attached quickly and easily to the net using a special mount that allows the camera to return to its original position once the net has stabilised. Figure 3 shows a feed from Goal Cam during the Euroleague basketball tournament in Warsaw.

Bobsleigh
Some of the most compelling sports video sequences ever captured have come from Pop-up Ice Cam, a 22 centimetre long unit designed to be pre-frozen into bobsleigh track. Pop-up Ice Cam incorporates dual POV cameras which can be raised and lowered by remote control to capture the sled as it approaches and departs at speeds in excess of 70 miles per hour. We also routinely provide camcorders fitted to the sleds themselves which give the television audience a front-seat view of the descent, sometimes to terrifying effect. Q-Ball is also being used increasingly to provide aerial track shots.

Football
Net-Cam cameras entered football history on 27 June 2010 when an estimated 26 million viewers saw Frank Lampard's disallowed goal during the England team's defeat by Germany in Bloemfontein. Referee Jorge Larrionda did not realise the ball had entered the goal until he watched the video replay at half-time.

With the game delicately balanced at 2-1 to Germany, the disallowed goal had an adverse effect on the morale of the English team and was a corresponding spur to the German players. The crucial images from Net-Cam were captured by broadcasters, online newsmedia and the worldwide press as proof that this goal should quite definitely have been allowed. The referee was later quoted as responding "Oh my God!" when he eventually found time to watch the camera output. A lot of viewers were left wondering why he waited until half-time to do so. The German team would have been just as irritated if it had lost a goal in similar circumstances. There have been many football matches in recent years where the outcome would have been different if the video output from Net-Cam had been available as a confirmation tool for referees.

A total of 20 Net-Cams were operational during the first weeks of the South African tournament, two at each of the ten venues. We also provided 100 Q-Ball remote pan/tilt/zoom HD/SD heads, 20 robotic box cameras, 10 robotic tactical camera, and 10 robotic venue-wide cameras. These were supported for the entire duration of the event by a crew of 29 technicians and engineers, plus spare and support equipment.

Skating and Skiing
How to capture close-ups of oncoming contestants during speed skating, ski slalom or the super slalom? We developed a remote camera housed in a marker cone and, much more challenging, a ski-slope guide pole. The resultant images proved spectacular.

Ensuring efficient operation at sub-zero temperatures is a key consideration at snow-sport events. All our sports POV cameras are designed to ensure maximum weather resistance. Q-Ball achieves this by being housed in a 115 mm diameter sphere machined from solid aluminium. The image shows two Q-Ball heads ready for operation at the 2010 Winter Games which were the first to be televised fully in 1080i high-definition. Two 40 metre tracking systems, nine sports dollies, over 60 robotic heads, 118 HD cameras plus a large inventory of lenses, controllers, interfaces and support equipment were installed to cover events from Vancouver as well as the winter sports resorts of Whistler and Cypress Mountain.

Rocket Ball
An important development in recent years is the availability of highly robust recorders capturing 1080i video and high-quality audio to solid state memory cards. We implemented just such a system for the Q4 2008 series of Gladiators produced by Shine for Sky 1 at Shepperton Studios Stage C. Athletic members of the public battled against the show's resident contestants to claim points in events that required speed, strength and skill. 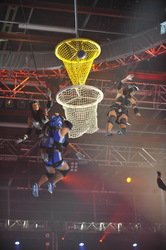 A new feature introduced in the 2008 Gladiators series, Rocket Ball, gave contestants the opportunity to play what amounts to basketball on steroids, launching themselves into the air on a motorised line attached to their harness. They then tried to pitch the ball into baskets defended by other players. Solid-state video capture was ideal as it is far more resistant than video tape against the bumps, thumps and fast acceleration to which sports contestants subject themselves. The equipment took the form of a Helmet Cam and Body Cam, optionally feeding a miniature wireless link or solid state recorder. Individual Rocket Ball games in Gladiator lasted 90 seconds and were captured to Quicktime video files which were later forwarded to the programme editors. 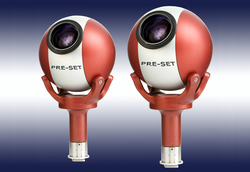 Looking ahead
Remotely controlled camera systems such as Q-Ball and the recently introduced Q-Ball Pre-Set are playing an increasing role in a variety of applications not just for sport but for major public events, live concerts, reality television shows, film productions, conferences and conventions. Industry adoption of 1080i high definition is progressing rapidly, greatly increasing the potential degree of realism that can be delivered to the home. 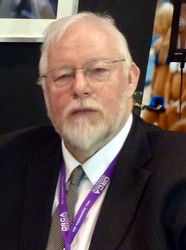 Laurie Frost is founder and Managing Director of Camera Corps, based on the site of the former Brooklands motor-racing track near Heathrow. He holds numerous awards including a Technical Oscar from the American Academy of Motion Arts & Sciences for his development of the HotHead remote camera head, an Emmy for television coverage of motor racing and a Technical Achievement Award from the British Society of Cinematographers for the development of remote heads.