SIS Live delivers Honda Live Skydiving Arvert
On 29th May 2008 SIS LIVE supported the delivery of a critically acclaimed live advert for Honda, broadcast live on Channel 4. It was described at the time by the Guardian as “the first ever live advert on British television” and featured 45 people sky-diving in formation over Madrid, moving to spell out HONDA, under the tag-line ‘difficult is worth doing.’

The complex and impressive nature of this production allowed the newly created SIS LIVE to demonstrate its full end to end of broadcast capabilities, including special cameras systems, RF camera systems, outside broadcasting, uplink and teleport technology. Working for clients North One, who were contracted by 4Creative, Channel 4's in-house creative team, SIS LIVE handled the capture of the action and its transmission path back to the UK and into Channel 4.

On relatively short notice SIS LIVE was able to divert its expanding outside broadcast vehicle Unit 8 and uplink trucks from Monaco where they had been covering the Formula 1 Grand Prix. These arrived in Spain and formed a central production hub for the creation of the programme.

The major challenges of the project included the lack of live communication possible between the director and the skydivers. As he couldn’t simply say ‘jump now’ the entire event had to be meticulously planned during 19 rehearsal jumps over the three days prior to the event. One of these was recorded as a back-up in case of technical or weather problems. Weather was another unpredictable factor which threatened to derail proceedings. 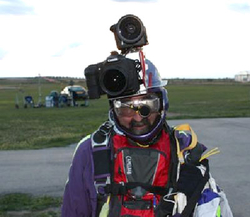 The SIS LIVE crew handling the event coverage was expert and experienced in creating bespoke solutions for a range of environments and conditions.

The transmission was downlinked at SIS’s teleport and MCR facility in Corsham Street, London and passed on to Channel 4 for broadcast. The three minute advertisment, which aired in an ad break during Come Dine With Me, was seen by an average of 2.2million viewers, with an uplift of 8% during the advert itself.

The content was filmed using thirteen cameras including three helmet cams strapped to the sky divers and six mini-cams located inside the two aeroplanes. SIS LIVE supplied a range of specialist camera systems and RF radio transmitters/receivers, many of which were developed and built in-house at its base in Langley.

Skydivers
Above formation filming
Two experienced solo skydiver cameramen were fitted with bespoke systems and tasked with filming the formation from above. All systems were extensively tested for safety and operability and had to gain the approval of the jump master prior to use.

These two camera systems featured Sony DHR-HC3 HD camcorders fixed to the cameramen’s helmets using the existing mounts. These cameras captured stunning HD pictures of the jump and surrounding scenery.
The feeds from these cameras were fed into a purpose-built “Camelbak” rucksack worn on the front of the skydiver which contained the live link, power amplifier, aerials and batteries. 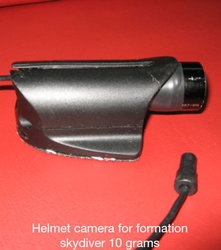 The system was designed to be remain in standby mode on the ground, with the action of plugging in the break away camera connector firing the system into transmitting live pictures of the jump. This meant that the camera batteries would remain operational for the longest possible time.

The Skydiver’s own webbing technician modified the fixings of the ‘Camelbak’ rucksack to ensure all parts of the system were safely secured and that the needs of the jump were met.

In-formation filming
For this SIS LIVE employed a similar system with a rucksack carrying transmission equipment, but with smaller helmet-mounted mini cameras. Because the skydivers came close to each other in the formation jump a much smaller camera was used due to safety.

On Board Cameras
Plane 1: Pilatus P6
SIS LIVE rigged the first aeroplane with a 2 GHz RF Transmitter, which allowed up to four camera inputs, with one being transmitted to the ground receivers at any one time. The switching of the cameras was controlled via UHF data link from the ground. The system was mounted under the jump master’s seat next to the pilot and powered by a 12volt battery, housed in a purpose-built aluminium case. 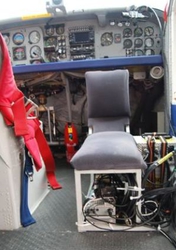 All parts of the system were mounted on a sub plate that was fitted to the floor with “dual lock” a 3M product made for temporary installation such as this. All parts were then ty-rapped to the metal structure of the seat and from here a cable loom went through the gap of the sliding door to the Arial array mounted to the step of the plane. The aircraft door still had full operation and could be closed and locked as normal.

Camera One: wing strut
Camera one was mounted to the upper wing strut with the cable passing down inside of the strut fairing and out of the bottom and into the plane through the door.

A micro bullet cam weighing only 35grams including the mechanical mount was used and fixed in place by “Dual Lock“, webbing safety and two ty-raps.

Camera Two: External door shot
This micro camera was mounted on a Dual lock with black-tak sealer around the mounting, fixed to the plane surface above the pivot point of the undercarriage strut.

Camera Three: internal door exit camera
The third on board micro camera was mounted to the cabin wall above the exit door.

Plane Two: Cessna Caravan
An RF transmitter was mounted in a similar way to the P6 with the system positioned between the seats, and bonded to the framework of the partition wall. All cables went under the fixed matting to the rear sliding door and through the gap to the aerial array which was mounted on the external step.

Camera one: A small manned camera with a broadcast lens
A cameraman was positioned at the rear of the plane to film the divers exiting. The camera itself was separately tied to the plane and the operative tethered to an experienced skydiver. This meant that in an emergency the cameraman could have exited the plane as a tandem diver, leaving the camera behind in the plane.

Camera two: Exterior wing camera
This was fixed to the wing pull down ring by means of a twin washer’s type clamp, with a secondary tie wrap. The camera cable then went along the leading edge of the wing, covered by helicopter leading edge tape, then into the gap of the sliding door.

Camera Three: External cross shot camera
This camera was to deliver shots of the other plane when in formation. A roll bar clamp was used with double sided tape to the hand hold on the side of the aircraft, with ty-raps as the secondary. The cable was routed through the sliding door.

All camera leads were made from type 44 aircraft spec cable and all mounts were agreed with the plane operator and the flight engineer who had final approval on the installations. 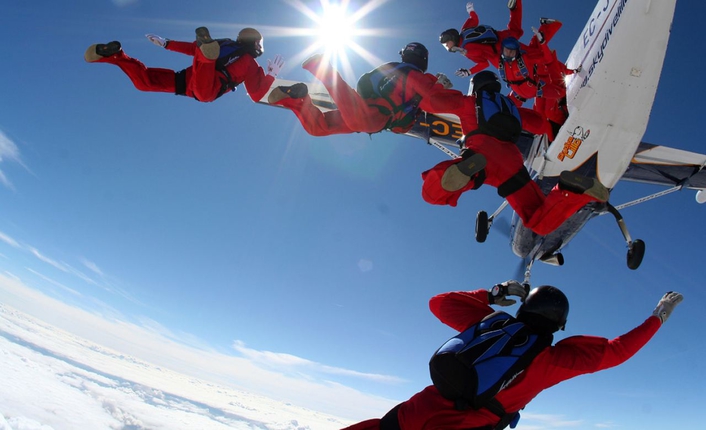 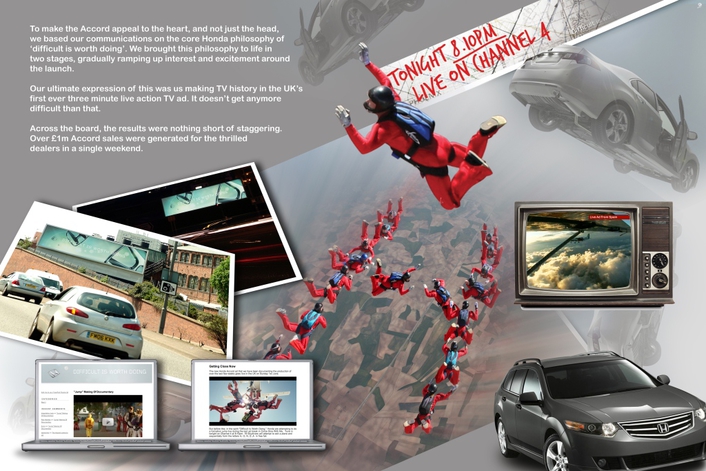 The promotion for the Honda Accord