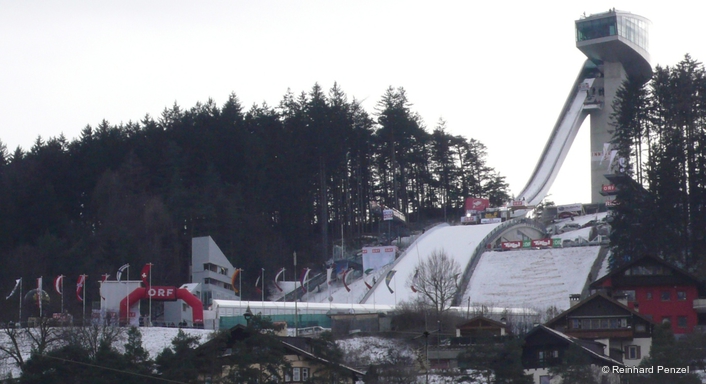 One of the tournament's particularities is its controversial qualifying system. Unlike the other ski jumping events where the best 30 competitors of the first series qualify into the second series, all four tournament's events follow the so called knock-out system, first introduced in the 1996/97 season. 50 first series competitors are divided into 25 pairs. All 25 winners of those internal "duels" plus five best "lucky losers" qualify into the second series. This way, it is theoretically possible that a competitor with the 12th first series result does not qualify into the second series (if he loses his internal duel, five lucky losers and winners of their duels have better results) while the one with the 49th first series result may still qualify (if his "rival" has the worst result). If qualification is postponed until the day of competition, knock-out system is not used, and competition follows regular world cup rules. 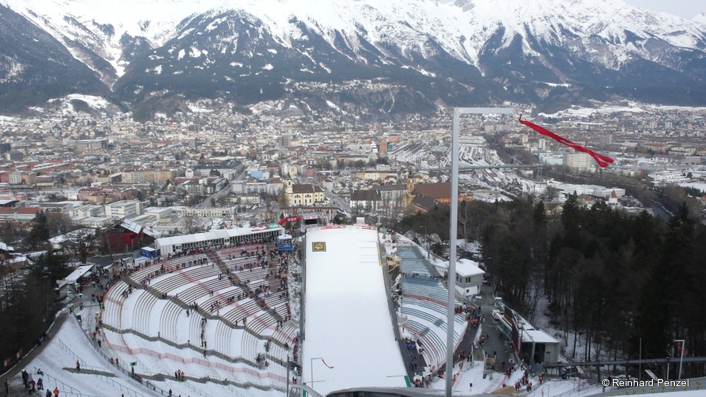 Because of that in 2007/08 tournament, knock-out system was used only in Oberstdorf. The 2007–08 Four Hills Tournament was held in only three of the traditional venues of Oberstdorf, Garmisch-Partenkirchen and Bischofshofen, located in Germany and Austria. The competition at Innsbruck was cancelled due to adverse weather conditions and replaced by an additional visit to Bischofshofen. The host broadcaster for the competitions in Germany is ARD while ORF is the host broadcaster in Austria.

For the events in Oberstdorf, Garmisch-Partenkirchen and Bischofshofen more than 20 cameras were installed, including a Sony SuperSloMo, a LMC UltraSloMo, two MiniCams at the take-off area as well as PoleCams and wireless cameras. New at this year’s tournament was the introduction of LMC’s UltraSloMo camera “Antelope”. The camera recorded the ski jumpers with 500 and 1.000 pictures/s. For the playback the system has generated a clip in 1080i and via a dedicated controller impressive pictures of the flying and landing sequences could be visualized. The cameraman can operate the “Antelope” system as a normal camera, zoom and focus control is the same as with all other broadcast cameras. 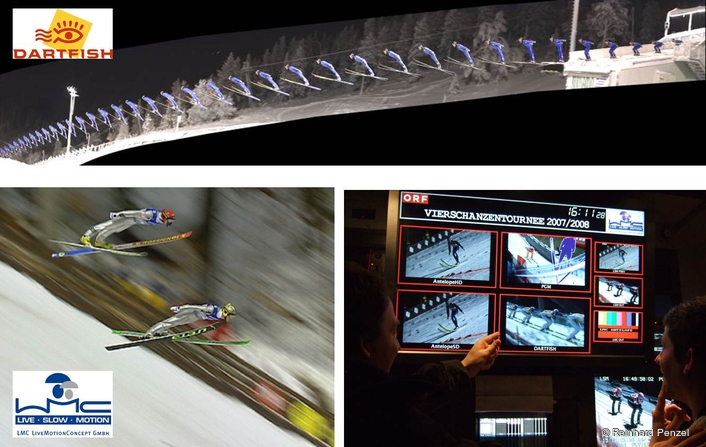 Due to the knock-out system at the Four Hills Tournament, also LMC’s sports analyzing-system, which is based on the SimulCam/StroMotion software from Dartfish, was in use to compare some of the head to head competitors. SimulCam™ is based on the idea that whenever two athletes are competing at different times, but over the same terrain, their filmed performances can be composited into a single video showing both competitors seemingly competing together. To create SimulCam™ pictures, DartStudio™ computes and compensates automatically the differences in camera angle (pan, tilt, zoom) between the two recorded performances and blend the two performances creating a new high quality video.SimulCam™ pictures show at each instant, the relative position, speed and posture of the two competitors on a single display support. SimulCam™ pictures allow unparalleled in-depth comparison and analysis. It contrasts and compares the position, style and trajectory of competitors. It illustrates what one 10th of a second’s difference at the take-off area can mean in the jumping width of an athlete. In addition StroMotion™ reveals the evolution of an athlete’s movement, technique, execution and tactics over space and time in an immediate, intuitive fashion. An athletic movement is unfold in time and space by compounding video images into a frame-by-frame sequence. The StroMotion™ concept is based on stroboscoping, a means to analyze rapid movement so that a moving object is perceived as a series of static images along the object’s trajectory. The StroMotion™ not only helps revealing the evolution of an athlete’s movement, technique and execution it also shows the different techniques of the jumpers e.g. at the take-off area. The integration of the Dartfish user interface for SimulCam™ and StroMotion™ into the LMC application including an EVS SloMo server the system has proven it’s robustness in all kind of broadcast live productions.

Next year in High Definition

Since 1952, Innsbruck has hosted one leg of the Four Hills Tournament. The Bergisel Ramp was built of concrete for the 1964 Winter Olympics to replace an older, smaller ramp. It was also used for the 1976 Winter Olympics. A new ramp was opened in 2003, designed by the architect Zaha Hadid, as the old one no longer conformed to contemporary requirements of ski jumping. In the same way also the broadcast infrastructure to deliver exciting and stunning pictures to the TV sets around the world was continuously expanded and improved. This year the ski jumping event in Engelberg, Switzerland was produced for the first time in high definition. The HD OBVan from RTSI did the job and the viewers of HD Suisse were able to follow the high quality event in high definition. Currently ORF is upgrading 2 of its standard definition OBVans to high definition and next year the world also will be able to see the ski jumping events in Innsbruck and Bischofshofen in again improved quality.