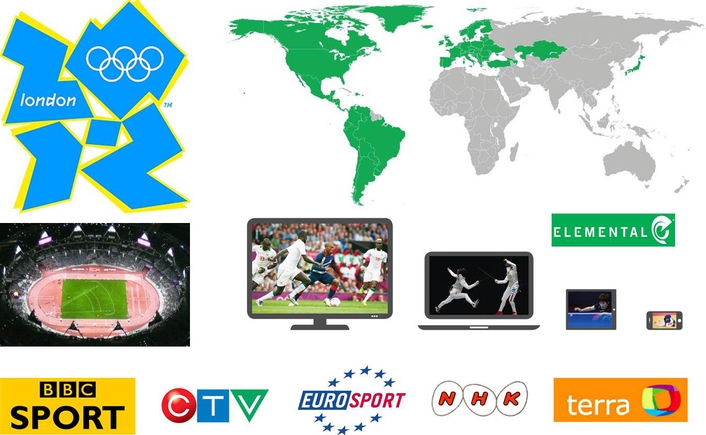 The Summer Olympics: All about the Athletes, the Fans - and the Broadcasters
The technology and ingenuity of broadcasters with distribution rights to the 2012 Olympics were thoroughly tested in an effort to serve a wider viewing audience than ever before, measured both geographically and by sheer audience numbers. Following extensive evaluations to find the best encoding platforms for both live and on-demand video streaming, the BBC, CTV, Terra, NHK and Eurosport all selected Elemental video processing solutions to support coverage of the 2012 Olympics.

The clock ticks towards 9:00pm local time in London and the Opening Ceremonies for the 2012 Olympic Games are just minutes away. Fans in attendance and in their homes around the world await the spectacle they have been anticipating for months. Athletes prepare to enter the grand stage, a moment they have been working towards for years. These two groups—the fans and the athletes—are integral to the success of the Olympic Games and their stories are highly publicized.

Nearly invisibly in the background, a third group works to bring the event to a global audience: the broadcast rights-holders. This is the culmination of a relentless effort to provide the best possible viewing experience to an audience using a host of digital media platforms to tune into Olympic events. Seven years in the making, these next two weeks prove which networks hold the world’s attention through ubiquitous video delivery of the Summer Games.

In 2005, London claimed the right to host the 2012 Games. Seven years may seem like plenty of time for broadcasters to prepare, but the technology for streaming video was raw and unsettled at the time. U.S. television still broadcasted exclusively in SD, and the iPhone and iPad would not be released until 2007 and 2010 respectively. With London 2012 dubbed the first truly digital Olympics, broadcasters such as the BBC in the United Kingdom, Eurosport across the European continent, Terra in Latin America, NHK in Japan and CTV in Canada faced exceedingly high expectations for video delivery. How did these organizations around the world make sure coverage of this monumental event offered the best multiscreen video experience possible? 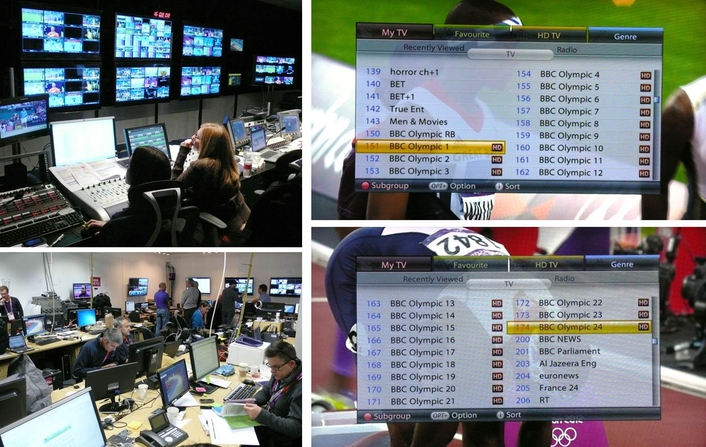 BACKGROUND: AN EVENT LIKE NO OTHER
The Olympics historically drive innovation in media coverage. As the Olympic charter states, “The IOC [International Olympic Committee] takes all necessary steps in order to ensure the fullest coverage by the different media and the widest possible audience in the world for the Olympic Games.” In 1936, this meant broadcasting the games on television, albeit only to local audiences. The 1956 Winter Olympics were the first to be internationally televised, creating high demand for broadcasting rights. The very next Winter Games saw the first sale of rights to networks.

Fast forward half a century, and the value of Olympic broadcasting rights has skyrocketed. CBS, for example, paid $375 million for the rights to air the 1998 Nagano Winter Olympics in the United States. NBC followed by spending $3.5 billion for the U.S. broadcast rights to the Olympic Games for 2000 through 2012. With these rights comes the responsibility to ensure extensive public access to coverage, and the IOC has not wavered in its push for better and broader viewing options. The evolution of the technology employed by broadcasters has been rapid—it was not long ago that the tape-delayed airing of a few select events on television during primetime was sufficient, whereas now the goal is to make any event available for viewing on any platform at anytime and anywhere.

CHALLENGE: BIG GEOGRAPHIES AND RECORD VIEWERSHIP
The technology and ingenuity of broadcasters with distribution rights to the 2012 Olympics would be thoroughly tested in an effort to serve a wider viewing audience than ever before, measured both geographically and by sheer audience numbers. As the host-country broadcaster and one of the most innovative media companies in the world, possibly no organization felt the pressure to deliver a quality experience to its viewers more acutely than the BBC. Terra in Brazil, Eurosport in France and CTV in Canada faced unique challenges as well. Terra and Eurosport were tasked with regional distribution, serving more than 17 and 50 countries, respectively. CTV was tasked with multimedia delivery of the Games across Canada after logging record-breaking numbers airing the 2010 Vancouver Games.

One of the more lofty goals set by broadcasters for the 2012 Olympics was to provide subscribers with the opportunity to view any given event live. Whether it was an American who wanted to watch a team handball match at 2:00am or a South African interested in tuning into a volleyball game in the middle of the day, if the event was live, a viewing platform would be available. No one waits in today’s multiscreen world. Viewers expect events on demand on every platform—in some broadcasters’ cases, even while the event was still in progress.

However, with 34 Olympic venues and 26 sports (many of which were scheduled to occur simultaneously), it would take very powerful video processing systems to make streaming vast quantities of content to an array of devices possible. High expectations were set with regard to availability of high quality video on televisions, PCs, tablets and smartphones, both live and VOD, via fast Wi-Fi connections and 3G networks. Certainly this was an extensive set of requirements, but the BBC, CTV, Terra, NHK and Eurosport knew one thing: coverage of the Olympics was not a project in which they could make tradeoffs. With millions of eyes glued to screens, there was no margin for error.

It was up to the broadcasters to select a partner with technology powerful enough to handle numerous streams in a single system and robust enough to prevent workflow failures come show time. 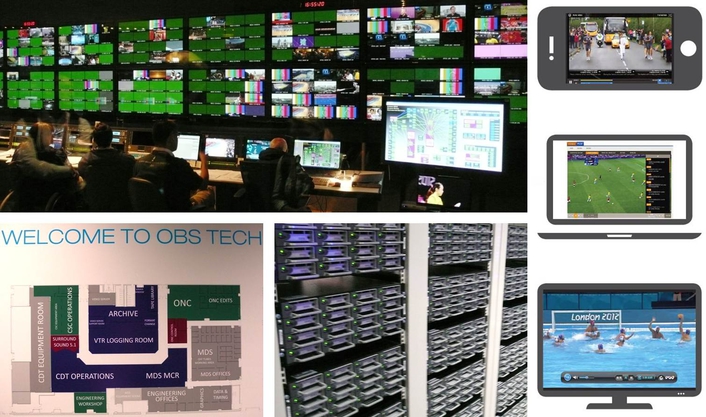 Covering the Olympics is unique because it is such a massive event—every four years it becomes the biggest sporting experience the world has ever seen. Much as athletes train for years to win events that last mere minutes, broadcasters build and prepare for Olympic broadcasts long before anything reaches the public. Each broadcaster begins with functional testing, but that is only one dimension of the evaluation process. Less tangible elements prove the strength and wisdom of the vendor during the process including timely communication, commitment to issue resolution and the overall responsiveness of the working relationship. Truthfully, these factors always have a role in an evaluation process. But in the case of the Olympics, nailing them was paramount. With knee-buckling pressure in the final months leading up to London, broadcasters had confidence that Elemental would deliver reliably every time. It gave broadcasters one less issue to worry about.

As a software solution running on powerful off-the-shelf hardware, Elemental immediately held an advantage over hardware-based encoding solutions. In the case of the BBC, Elemental rolled out several major software releases between the time of its selection and the start of the Games. Being able to move quickly, make updates and work through issues with customers in real-time showed broadcasters the strength of Elemental’s technology.

“Elemental’s solution provides a level of quality that is unmatched in the market without sacrificing the traditional tradeoff of density and cost,” noted Werner Michels, engineering director at Terra. “We chose to partner with Elemental because compared to the vendor we used for the Vancouver Olympics, with Elemental we were able to increase our coverage of the games and throughput by more than 50% in less than half the rack space while improving quality.”

The BBC used Elemental® Live for its adaptive bit rate streaming service. The Web player took advantage of the archive feature of Elemental Live to provide VOD and catch-up TV capabilities, enabling viewers to rewind and have instant access to replays. The BBC also created a mobile application for iOS and Android devices that supplied access to live coverage, statistics and commentary. Lastly, it produced streaming content specifically for connected televisions and Sony PS3, giving viewers a plethora of platform options to tune into their favorite event at any time.

Terra, CTV and Eurosport similarly leveraged Elemental Live by distributing streams to an array of devices, though each broadcaster had its own unique infrastructure for video delivery. Terra directed incoming HD and SD fiber optics and satellite feeds into Elemental Live for video processing and tightly integrated social media into the viewer experience, as did CTV. Eurosport, meanwhile, converted 42 live video streams in more than five bit rate profiles each, representing a global bandwidth of 400 Mbps. The sports media company made its streams available within its Yahoo! portal. 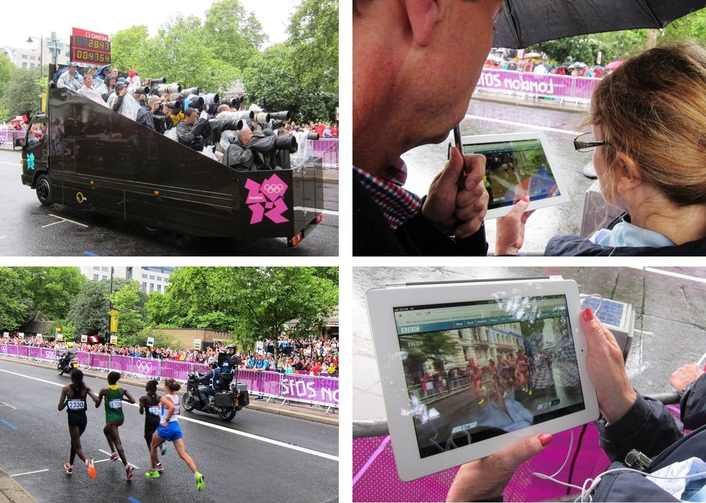 Additionally, Elemental provided file-to-file transcoding for over-the-top viewing of on-demand events in the U.S. as well as live streaming coverage of the Games in Japan, managed by broadcaster NHK. When all was said and done, Elemental powered Olympic coverage in more than 70 countries across four continents, delivering an estimated 600 million streams.

BENEFIT: A MARATHON, NOT A SPRINT
For nearly all rights-holding broadcasters, the road to covering the 2012 Olympics started years ago. In several cases, Elemental played a large role in these journeys, offering unwavering support and technical guidance along the way. By leveraging Elemental systems, BBC, Terra, NHK, CTV and Eurosport delivered some of the most accessible and high quality video experiences the Olympics has ever seen.

The Olympics were an unquestionable success for each Elemental customer. In total, customers using Elemental products streamed thousands of hours of the Olympic Games:

BBC The BBC announced that in the UK, data delivery peaked at 2.8 petabytes of content, featuring a peak rate of 700 Gbps when Bradley Wiggins took home the gold in men’s cycling. 34% of daily viewers used mobile devices, resulting in over 12 million mobile requests for video.

CTV CTV reported 31.9 million viewers tuned in across all platforms in Canada, up 88% from the 2008 Beijing Olympics and reaching an incredible 95% of Canada’s population. Users logged over 662 million hours of content, an average of 21 hours per viewer.

EUROSPORT Eurosport.com averaged 5.6 million daily visitors in France and across continental Europe during the Olympics, up 36% over its normal site traffic. Video viewership, on the other hand, increased 80% during the Games with a peak of 13 million viewers.

NHK NHK reached more than 26 million online viewers in Japan and streamed up to 20 events each day across eight simultaneous Internet channels. In Tokyo, 38% of households viewed the Opening Ceremonies live despite a 4:30am start time, with many using IP connected devices to tune in.

TERRA Terra hit 97.8 million total viewers in Latin America and streamed 122.4 million videos through its online portal, both live and on demand.

With their choice of which event to watch, when to watch it and how to watch it, Olympic fans shattered viewership records. Through the unmatched density of Elemental systems, broadcasters delivered the fullest, most complete Olympics viewing experience to their subscribers without incurring substantial cost.