Based in London, Timeline Television is a well-known name in UK broadcasting. For the past 10 years, the company has been spearheading broadcast solutions from concept to completion, including: outside broadcasts, post-production and studio-based productions. With two sizeable post production facilities in London and a third in MediaCityUK (Salford), Timeline works with many of the UK’s broadcasters to deliver technical and creative facilities for programmes that vary in size and scope from live music and awards shows to political party conferences, global and domestic sports competitions, and current affairs.

As a leading broadcast supplier in the UK, Timeline needs to ensure its technology and services are at the forefront of developments in the industry. As such, in 2012 the company embarked upon an ambitious project with BT Sport to design and build the broadcaster’s new high-tech production hub, in the Queen Elizabeth Olympic Park, within a tight timeframe.

“We only had six months to get BT Sport’s new production hub off the ground, so we had to source the most proven and reliable technologies, from trusted vendors, to make sure we were not only completing the project on time, but working within BT Sport’s budget while optimising their workflow in such a competitive market,” said Jon Ward, Lead Engineer at Timeline Television.

Owing to this, Timeline needed reliable technologies that offered the greatest value for money. “When it came to a routing system, we evaluated several on the market and SAM’s Sirius beat out the competition by far because of its ability to support hybrid audio processing, and 3G Video whist maintaining 100% redundancy in its architecture. We purchased three Sirius 850 routers for that project, which is what kick-started our relationship with SAM,” he commented.

Fast forward to 2015 when Timeline found itself embarking on another ambitious project in partnership with BT Sport.  Leading the sport’s broadcasting field, BT Sport took a quantum leap, choosing to launch a new dedicated UltraHD channel in August as well as adding 8 new HD channels.

BT Sport commissioned Timeline to deliver over 65 UltraHD outside broadcasts in the first year. The challenge was to build a pioneering UHD 4K outside broadcast truck; with brand new and developing technology, in a very short time frame, that would be capable of delivering reliable quality broadcasts for many years.

As a project goal, Timeline sought to work with vendors that could enable UltraHD OB productions to be made to the same high standards as current HD programs. 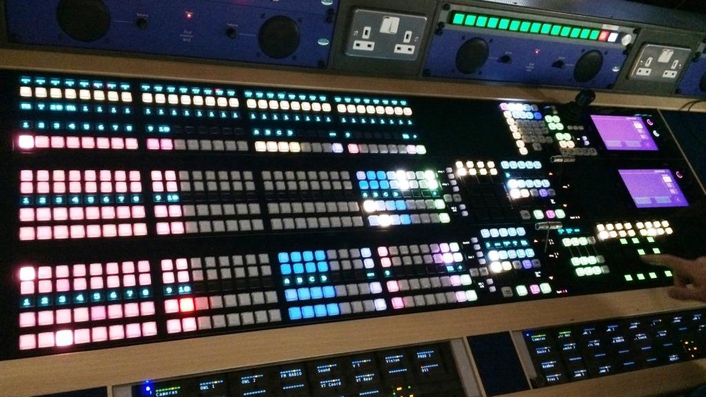 “In our opinion, there are only a handful of manufacturers that are experts in the underlying components of 4K transmissions. So choosing our vendor partners for this project was a highly selective process,” said Quinn Cowper 4K/UHD Vision Supervisor at Timeline.

Drawing on SAM’s rich heritage in live production, Timeline deployed SAM’s Kahuna 9600 switcher with its modular control panel and Sirius 840 router as the truck’s UHD backbone. With 4 fully 4K M/Es the powerful Kahuna 9600 offers a host of key features such as:

·    The freedom to combine mix/effect banks, keyers, and DVE effects to create any on-air style

Timeline is using the Kahuna switcher in a four M/E configuration and has maximized the level of input and output cards the switcher offers, resulting in up to 30 UHD 4K inputs (further expandable via the Sirius 840) and up to 16 UHD 4K outputs. To capture the live action, Kahuna handles signals from up to 16 Sony HDC-4300 UHD cameras (with Fujinon UHD lenses) and integrates with EVS servers and a Grass Valley Kaleido Modular-X Multiviewer. 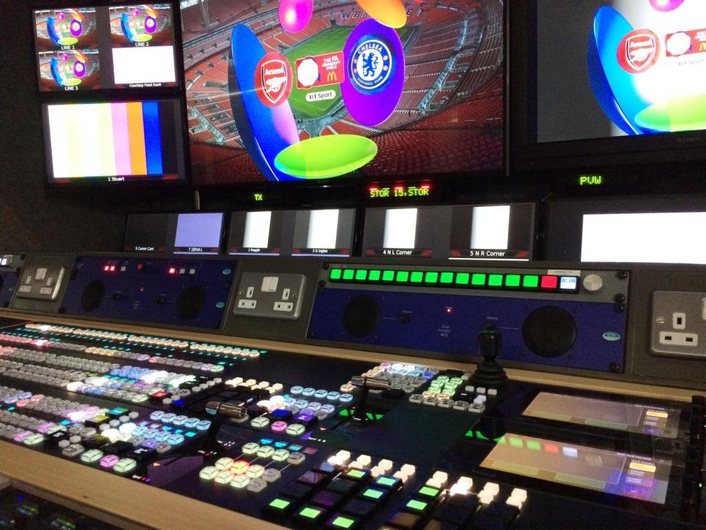 SAM’s modular switcher control panel for Kahuna gives Timeline operators the flexibility to create their own switcher panel, reconfiguring it to their specific needs and providing easy access features like custom thumbnails. Adding to the overall flexibility of this is the Sirius 840 router, which allows for any combination of signal formats and processing, without any limitations on timing or synchronization. It also doesn’t compromise on redundancy, monitoring, or expansion capability.

The 13-meter truck, UHD1, was constructed from the ground up with the highest quality UHD components available. With an end-to-end UHD workflow, the truck is considered one of the most advanced mobile production facilities in the world and represents a considerable leap forward in UHD technology to date.

“When working with such sophisticated technology, it’s important to collaborate with manufacturers who truly understand the challenges of UltraHD 4K. Everything takes more time when you’re broadcasting in UltraHD. The files are bigger, so moving and storing them is harder. Furthermore you need more cabling and more overall processing power than you’re typically used to. So you want to build out your infrastructure in a way that makes things simple and easy for everyone. 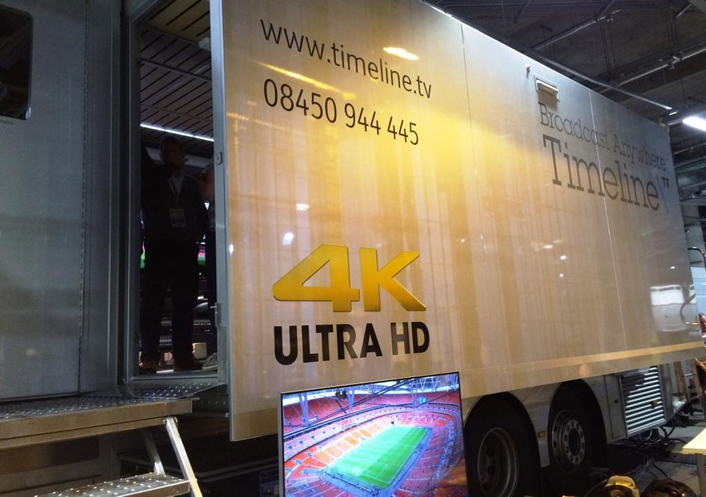 “SAM was very forward thinking with Kahuna. It simultaneously supports every standard from SD to HD to UltraHD, which means we can convert signals from different broadcasters with ease. Kahuna handles UltraHD 4K right alongside HD, with the same ease and simplicity as working with just HD, so there’s really no learning curve for our operators. It’s also fully IP-enabled and we know IP is coming to live production. So when we’re ready for IP, our truck will be ready too.

“Beyond that, SAM’s ethos surrounding 4K is to deliver the most immersive viewing experience possible to customers, and that’s the philosophy we wanted to adopt with this project with BT Sport,” Cowper said.

BT Sport’s UltraHD channel is the first of its kind in Europe and serves as a key indicator of how live sports is driving much of today’s broadcast-production innovation. This isn’t a new trend, Cowper said. “When the industry moved from SD to HD, it was live sports that really fostered that push. We’re seeing the same thing now with UltraHD.” As such, 4K is growing in importance for live sports because its rich, vivid imagery presents fans with a lifelike experience that more closely matches being at an actual game.

This was evidenced in January 2016 when BT Sport teamed up with the National Basketball Association (NBA) to broadcast a live NBA game in UltraHD for the first time. BT Sport enlisted Timeline’s OB16 medium-sized truck, which contains a Kahuna 6400 switcher and Maverik control switcher. The truck managed the transmission of the UltraHD 4K signals with several cameras as the game was broadcast from London’s O2 arena and delivered right to fans’ living rooms on BT Sport Ultra HD.

A revolutionary moment in sports broadcasting, the game saw the Orlando Magic battle out the Toronto Raptors, and it went off without a hitch.  Previously in January 2015, the NBA became the first U.S. professional sports league to capture a game in UltraHD 4K, when the New York Knicks played the Milwaukee Bucks during NBA Global Games London 2015. But that broadcast was available to an invite-only list of NBA and BT Sport executives.

The 2015 broadcast also used OB16 with an experimental installation of the 9600 Kauhuna. We were so impressed with the demo unit, that we never gave it back to SAM. We purchased it straight away and it was the first component acquired for UHD1. 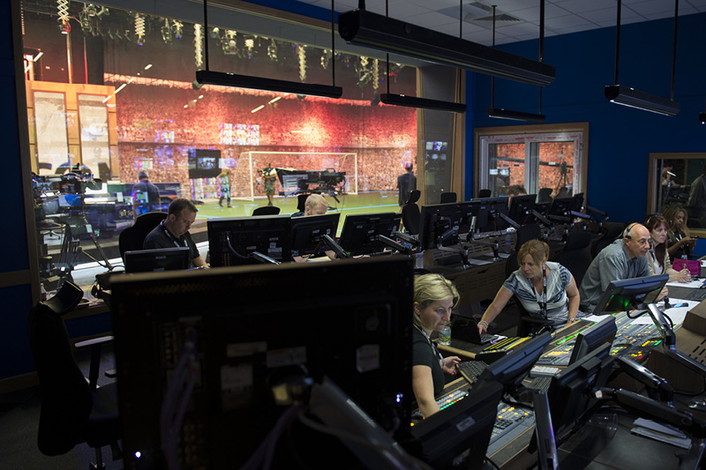 Cowper said this year’s NBA game was a huge achievement in sports broadcasting because it was the first time fans were able to watch a live NBA game in UltraHD. “They were getting a cinematic experience right in their living rooms.’ he commented.

Looking ahead, Cowper said UltraHD 4K will undoubtedly get stronger and gain more traction, especially in live sports. “This is only the tip of the iceberg when it comes to UltraHD content, and that’s why it’s important for us to partner with vendors like SAM to help us underpin our commitment to this exciting and emerging standard. SAM takes great care in defining its market strategy, and the company has a strong product portfolio in place, evidenced by Kahuna, to leverage the technology shift the industry is seeing toward 4K,” he said.

Timeline is very proud to be supporting BT Sport with their drive to deliver superb UltraHD sport programmes to viewers across the UK. 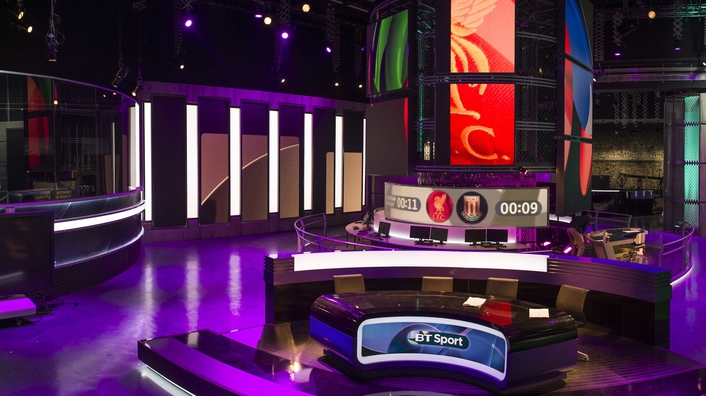