Dorna Sports and the MotoGP 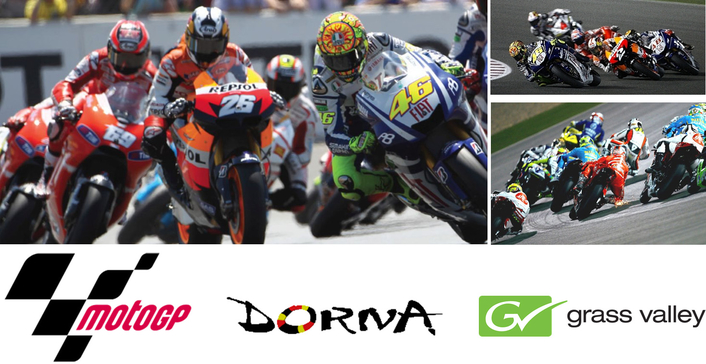 The key to Dorna’s tapeless, file-based live replay system is the Grass Valley K2 Dyno Replay System.
Since 1992, Dorna has been the exclusive holder of all commercial and TV rights for the FIM MotoGP World Championship. The company also participates in the management, marketing, and distribution of other motorsports properties, such as the Spanish Road Racing Championship (CEV).

MotoGP (www.motogp.com) is the pinnacle of motorcycle racing and Dorna’s star product. It is the oldest motorsport world championship in the world, established more than 60 years ago, and the current premier class pits the best riders and manufacturers in the world against each other.

Television viewers from more than 200 countries enjoy 18 Grand Prix events every year, with a total annual audience of more than 5.1 billion viewers.

MotoGP is a fast-paced, thrilling sport, taking the world’s best professional motorcycle riders and machines and racing them on the toughest tracks around the world. It’s the responsibility of worldwide TV rights holder Dorna Sports to make sure that for each race, the fans at home and in the bars and pubs around the world are not disappointed. 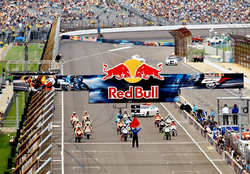 With a full-time staff of around 150, plus as many as 200 more production freelancers, Dorna relies exclusively on the Grass Valley™ K2 Dyno™ Replay System for the instant replays for each race.

Each of the 18 races that make up the MotoGP season takes place over almost 400,000m2 and is covered using more than 120 cameras of all conceivable configurations: cabled cameras around the track, the paddock, and the back lot; wireless cameras on board the bikes; cablecams; and a helicopter for the perfect view of the riders’ positions on the track.

For the 2010 season, Dorna was committed to moving the entire racing season to HD for one simple reason: it’s the path the market, and the broadcasters they work with, are following.

The move to HD triggered a major rethink in the way that the production workflow was to be handled. For Dorna, HD also meant a highly automated, tapeless, file-based workflow to handle the 40 hours of material for every one hour of race time.

Of the upmost importance to Dorna was that the workflow between live replays and its editing network be seamless. This means more than just audio and video being transferred, but managing the associated metadata as well. It’s this metadata that will give Dorna the information their replay operators and editors need by identify and tagging a clip once, and then having that information available to everyone.

Meanwhile in the HD OBVan

This was Dorna’s challenge. It was also Grass Valley’s opportunity to step up with a new concept in live replay: the K2 Dyno Replay System and K2 Dyno Production Assistant (PA).

Grass Valley’s design for the end-to-end flow of metadata for Dorna begins with the K2 Dyno Replay System, with the fast and easy entry of metadata tags by the operators directly from the K2 Dyno Replay Controller panel. Those tags are then available and used by the primary replay and playlist operator, stored on Dorna’s existing Apple-based Xsan with Final Cut Pro Server, and finally accessed and searchable by multiple Final Cut Pro edit stations.

Two large outside broadcast trucks are used for each race, built to Dorna’s specifications and operated by SBP of Italy. The first OB truck is “Track Feed,” and provides the main race coverage from the cameras around the track.

Within Track Feed, Dorna wanted to ISO record and instantly replay up to 18 of the available cameras, plus one or more super slow-motion cameras. These replays could be added to the Track Feed output, or sent separately to its second truck, “International Feed.”

International Feed prepares the multilateral program from the output of Track Feed (including the replays) intercut with the on-board and other cameras using a Grass Valley Kayak™ 3 M/E switcher. International Feed also ISO records some feeds and arranges for their immediate replay. The final program output is sent on to international broadcasters, either as a clean feed or, with the addition of graphics, as an international feed.

At the same time, all of these ISO recordings need to be transferred to the editing network where the story of the race can be told in a number of packages, from instant highlights as soon as the checkered flag is dropped to full-length programs required by specific broadcasters.

For MotoGP, metadata could include the name of the rider, the type of incident—pass, crash, wobble, the track location, as well as a star rating of the potential interest of the clip. The time of day is also stamped into the metadata, with all information available across the editing network.

Each of Dorna’s eight K2 Dyno Replay Systems consists of a K2 Summit™ media server and a K2 Dyno Replay Controller, which allows each operator to mark and tag clips, cue up replays, and play them back, using variable speed and mix effects to add production value.

The K2 Dyno Replay Controller has a touchscreen user interface. Before each race, all of the relevant information and tags are pre-loaded onto the K2 network, so each replay operator can enter valuable metadata with just a few touches of the screen.

Below the screen are the familiar replay controls allowing each operator to cue and play clips, including off-speed playback, securely and intuitively.

The K2 Summit’s open networked interfaces allow other software applications to interact with the servers. For Dorna, their production workflow depends on the K2 Dyno Production Assistant (PA).

K2 Dyno PA is a live production content management system providing access to all of the servers, all of the content, and all of the metadata on the edit network. Despite the fact that the network is handling the recording of close to 40 live cameras, some at triple speed, and that live replays are happening all the time from any of those feeds, a single operator can monitor and control the flow of material using a single K2 Dyno PA system. 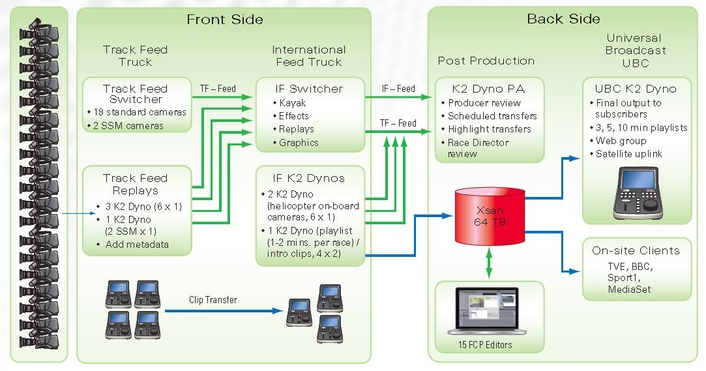 To provide for all of its on-site post production activities, Dorna carries and installs at each location a network of 25 Apple Final Cut Pro workstations, all sitting on networked storage. This is provided by a 64 terabyte Apple Xsan running Final Cut Server.

With its open, standards-based interface, the K2 Dyno PA manages a direct connection between the K2 server network and the Xsan editing network. Clips which have been identified by the K2 Dyno Replay System operators are transferred, complete with all associated metadata.

K2 Dyno PA also has a rules-based engine so users can determine which content to transfer, and to where. Before each race, the system administrator chooses which rules to use, can create new rules, and can set up times for recordings to be transferred.

K2 Dyno PA converts XML-based metadata into the Final Cut Pro format. This metadata, along with AVC-Intra encoded video, is transferred in a QuickTime wrapper.

Editors working in Final Cut Pro can have access to all this metadata. Those with specific tasks can set up their desktops so that all the content they need is dropped into their edit bin, saving a huge amount of time in searching and checking for content.

An individual editor, for example, might be asked to produce the story of how a rider moved from a position near the back of the starting grid to win the race. By searching the name of the rider and the “passing” clips, the material required will drop into that editor’s edit bin, and because the metadata also includes the time, the clips will be sorted in the right order. This is a massive boost to productivity.

For each race, Dorna’s trucks and crew are in production for three hours on Friday for practice, six hours on Saturday for qualifying practice, and six hours on Sunday for the race itself. On each day, between 1,500 and 2,000 highlight clips are created on the K2 server network.

Using the star rating system and filtering through the K2 Dyno PA, 1,000 to 1,500 of those clips are transferred, along with metadata, to the Xsan for editing.

Dorna maintains a deep archive of every MotoGP race at its facility in Barcelona. This is another Apple Xsan with Final Cut Server. The material to be transferred to the deep archive is selected automatically by rules defined by the operators, acting on the metadata embedded within the content from the moment of capture.

What Grass Valley has achieved, and what Dorna is benefitting from, is a tailored solution which delivers remarkable speed, accuracy, and operational convenience, easing the pressure on an extremely demanding production.