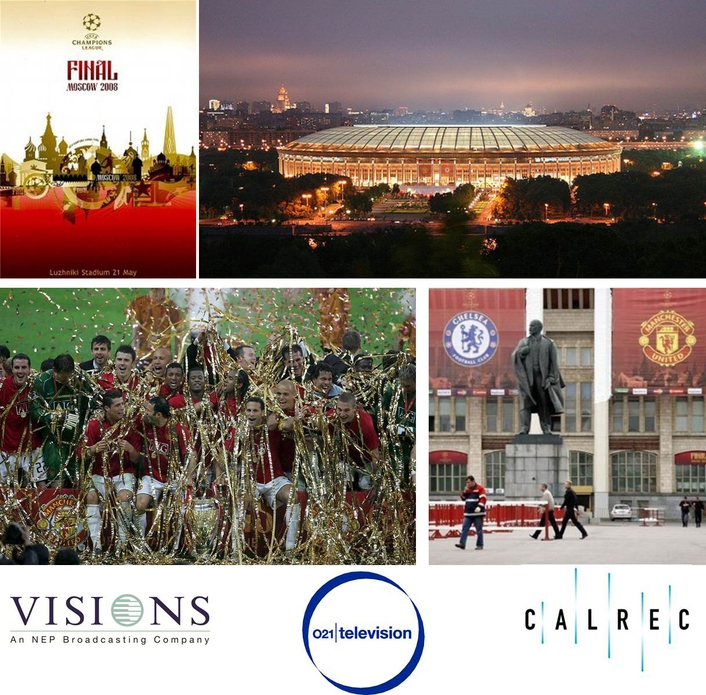 The match was the first all-English final in its 52 year history
The 2008 UEFA Champions League Final was a football match that took place on Wednesday, 21 May 2008. The match was played at the Luzhniki Stadium, in Moscow, Russia, to determine the winner of the 2007–08 UEFA Champions League. This was the first European Cup final staged in Russia, and hence the easternmost final in the tournament's history. The final was contested by Manchester United and Chelsea, making it an all-English club final for the first time in the history of the competition. The game was won by Manchester United 6–5 on penalties, after a 1–1 draw following extra time.

Over 300 million people heard the final whistle as Manchester United defeated Chelsea in the UEFA Champions League Cup soccer final this summer…thanks to Calrec Audio. A Calrec Alpha with Bluefin console provided every global audio feed from the match in Moscow, while two Calrec consoles completed a very British coup at the historic Luzhniki Stadium.

The match was the first all-English final in its 52 year history, and UEFA (Union of European Football Associations) appointed Britain’s Sky Television to handle all the production requirements. The game was hosted by Russian broadcasters RTR and NTV, although the infrastructure for global coverage was provided by two NEP Visions trucks, while England’s 021 Television provided coverage for ITV Sport.“The UEFA Cup final has been in HD for several years and we have been involved in every one,” said Keith Lane, Sky’s Sports Operations Manager. “Following a tender proposal, NEP Visions provided HD3 as the multi-lateral truck to produce the international feed on their behalf. We were already involved with providing the feed for Sky using Visions’ HD4.”

HD3 is a large double-expanding scanner with a 56-fader Alpha console. HD4 is also a large double-expando with 52-fader Alpha console. 021 Television also sent its Unit 7 truck to provide coverage for ITV Sport, using a 60-fader Sigma console.“As the Host, HD3 supplied all feeds including the main 5.1 match mix, stereo match mix, steady cam, international feeds etc. routed via the Technical Operations Centre (TOC),” said Keith. “The TOC international feed provides every other broadcaster – on-site or otherwise – with a clean feed to add local commentary.”Working on his third UEFA Cup Final in as many years, BAFTA award-winning Robert Edwards – another Brit – mixed the world feed in HD3. Robert is at the forefront of live to air 5.1 - as well as mixing UK Premier League matches for Sky he is responsible for a variety of large entertainment shows, and has mixed live 5.1 football for the FIFA World Cup.

“This was an interesting game and having three Calrec consoles on site made things so much easier,” he said. “We use a SoundField mic to capture the 5.1 crowd bed, and we supplement that with other crowd mics. An additional 16 mics are placed around the pitch and I spend all my time chasing the ball around with the faders! It’s a very comprehensive mix.“5.1 presents very specific problems, especially when you are producing multiple surround feeds alongside all the ISO feeds etc. Calrec’s TFT displays offer plenty of flexibility and one can be sure of what is being sent even in the most complex set ups.”

Robert added that there are peculiarities with working in HD, not least of which is the issue of delay.“I seldom need to apply a lot of delay to any one channel, but you do need quick and easy access to a number of legs – this is vital when you are broadcasting in HD. I never need more than six or seven frames of delay at a time, but the number of legs is often substantial. There are delays everywhere - a steadycam alone introduces two or three frames. One of the great things about Calrec’s Bluefin desks is the sheer amount of delay available, and the flexibility of placing that delay in the signal chain.”

For Calrec, designing for Outside Broadcast does not mean clumsy mechanical alterations of over-sized studio designs. In conjunction with experienced remote engineers, Calrec's design team has produced the Alpha OB console to ensure minimal impact on the vital criteria for space, weight and heat generation which determine a vehicle's success.

The Alpha OB has been designed to allow all signal processing and control systems to be located beneath the control surface. This is acheived without any significant increase in size or weight over a standard system.Careful and considerate design means this is acheived without sacrificing access to the system hardware or interfacing. Installation is straightforward and service access is excellent, while structural rigidity is re-enforced through the use of special metal profiles. 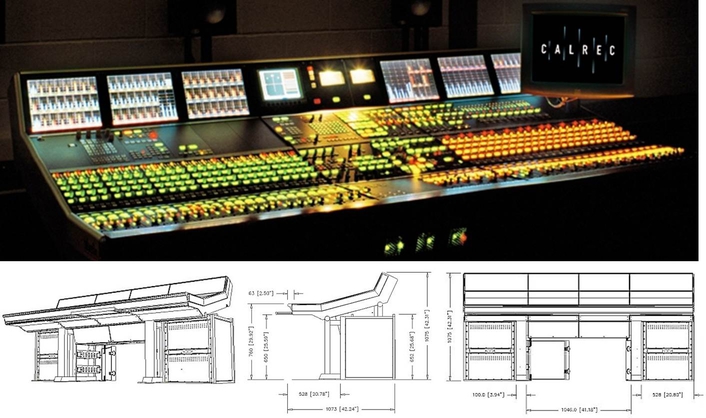 Alpha architecture has always focused on reliability and speed of operation required for live production - nowhere is this more critical than in remote production. The Alpha OB provides highly effective redundancy throughout the DSP and control systems, combined with hot-swap cards and panels.Fast boot and reset times re-inforce these measures to ensure the highest level of operational confidence.